Proust: The Adventure of Wisdom 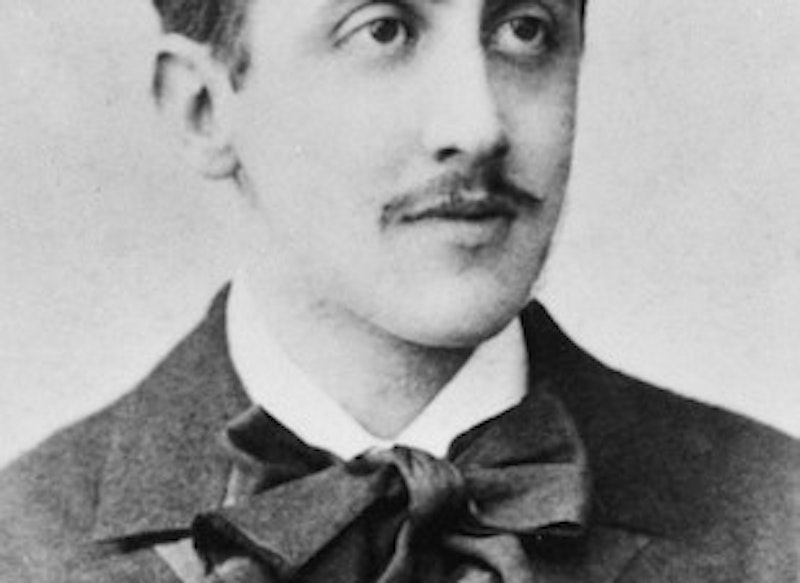 I realize that, by asking you to read Marcel Proust’s novel In Search of Lost Time, I’m fighting an uphill battle. You are a busy person. The book’s 4211 pages long, and since Proust was clearly long-winded, it’s difficult to believe he’s all that good. Most people regard Proust as a minor problem, to be solved without actually reading him, or else ignored with regrets. They’re missing the greatest confrontation with another soul anyone can have outside of wedlock.

Let me warn you against How Proust Can Change Your Life, written by Alain de Botton. The problem is that there’s never a good time to read it. If you read de Botton before you read Proust, then you’ll spend his whole book feeling sheepish, as if you’ve bought an upscale set of CliffsNotes. You’ll have no idea whether de Botton is right or wrong, and by the time you’re done, reading 4211 additional pages of French self-help is going to be daunting. On the other hand, if you pick up de Botton after you read Proust, what’s the point? If Proust didn’t change your life by himself, then de Botton is wrong, and his book is exaggerating. If Proust was a revelatory experience for you, then de Botton will be a come-down. It’s the same feeling you’d get if de Botton, after skimming Robert Pirsig, published an illustrated guide to the auto repair tips in Zen and the Art of Motorcycle Maintenance.

As a serious person, you’re stuck with Proust himself, and you’ll quickly discover that Proust is an uneven writer. In several important respects, he is... well, he’s terrible. Naturally, you’ll never learn this from de Botton. But I don’t know why Samuel Beckett, Roger Shattuck, Walter Benjamin, and Jozef Czapski all pass over Proust’s weaknesses too. Perhaps the feeling of triumph that comes from successfully interpreting a 4211-page book is dangerous to one’s little aesthetic objections. If Proust thought it was all connected, and worth writing down, then to hell with quibbles! He was mostly right, it turns out, so what’s the harm in pretending he was entirely right? Start admitting your doubts, and you can be sure your readers will never bother with the monstrous novel itself. True enough—except that one can, and should, marvel at Proust’s flaws instead. The book’s problems make the whole enterprise beautifully, vulnerably human.

Let’s recount those flaws. The first book, Swann’s Way, can be a slog. It is, in fact, a poorly-structured amalgam of two different novels with two different protagonists. One of them, Swann, is a pretty interesting guy in an unhappy relationship. The chances are, however, that you’ll never even reach Swann, because you’ll bail out after reading hundreds of pages about pre-pubescent Marcel and his infantile neuroses. For reasons that only become clear when you read Volume 6, Proust felt compelled to start his novel at the very beginning of his childhood. Then he proceeds to write about childhood as if all children write copy for Le Figaro. Despite what Proust may have thought, children do not write 14,000 word dissertations on their desires. They are blunt, dogmatic, and inconsolable. If their memories were in any kind of working order, they’d be completely intolerable. Our ability to distract them, or else wait them out, is the only kindness Nature has shown to persons above the age of 10. Proust doesn’t paint an accurate portrait of childhood; I’m not sure he was even trying. Swann’s Way is more like a rhapsody on the theme of childhood, written by an adult who remembers his early years fondly. The faster you zip through it, the better. The scene with the madeleine is underwhelming. We’re as-yet unacquainted with the adult Proust, so we can’t empathize when he turns sentimental.

Let’s say you survive Book 1. Your next problem is that Proust’s characters are precisely equal to their social status. A servant isn’t worth very much to him. Proust uses servants as comic relief, chuckling over the way they mispronounce words, chase after sizable tips, and pretend to a dignity they’ll never possess. Even worse, after burying the lower classes in condescension, Proust declares that he has egalitarian leanings, and takes people on their merits. It’s tempting to think he’s making a joke. If only he were! Yet the wonderful thing about Proust is that he assassinates everyone’s character, himself included. He trains the reader to see through egotism; his novel strips the ego of every disguise, doggedly, like Aristaeus holding fast to Proteus. So when Proust makes room for his own delusions, a few pages later, nobody’s fooled.

Proust’s an elitist; also, he can’t distinguish between the kind of love he’s experienced and the relationships other people have. In his real life, he was gay. He then risked his whole novel by making “Marcel” heterosexual. Remember, Proust had contemporaries, like André Gide, for whom homosexuality was the point. Gide was quite successful at making gay passions feel universal in novels like The Immoralist. In Search of Lost Time, meanwhile, is a would-be panorama of modern romance that ends up feeling incredibly specific to Proust. There’s homophobic panic in every description of gay and lesbian love: the gay men are manipulative and vain, the lesbians carnal and vicious. Furthermore, when Proust turns his attention to Marcel’s female lovers, he becomes a misogynist. The women in this novel are hopelessly inferior, intellectually, to the men. They’re also promiscuous, untrustworthy, and shallow. Yet the whole time he’s portraying them as such, a feeling of unreality prevails. It’s as if Proust’s mainly hoping to convince us that these women are real, the same way a bad comedian tries to sell us on anecdotes about marriage—with exaggerated bitterness.

Various postmodernists have floated the claim that Proust’s idée fixe about relationships is some kind of brilliant, irresistible scheme to overwrite everybody in the image of oneself. Proust’s making the attempt, but that dog won’t hunt. Every reader soon realizes that Swann’s relationship with Odette is the only tune Proust can carry. It’s his variation on Greek homosexual love: an unworthy eromenos (male or female) is kept under jealous guard by an erastes who’s making himself ridiculous. Eventually, the young protégé objects and rebels. Then the jealousy and recriminations escalate until the relationship implodes. This exact sequence recurs, by my count, at least four different times.

The continual expansion and proliferation of scenes with suppressed or secretive homosexuality are likewise supposed, by some of Proust’s would-be champions, to represent some kind of creeping triumph for queer desire. That’s a clever solution for Proust’s homophobia, but it’s willfully blind to the deformations that Proust attributes to his characters’ repressed homosexuality. Being intermittently effeminate, for instance, because you’re not allowed to be openly gay, isn’t triumphant. It’s involuntary, according to Proust, and embarrassing for all concerned.

Let’s take a different approach. Suppose Proust realized, as he was developing a plan for his novel, that all of its romantic relationships were identical. This is likely enough. It’s equally likely that he decided not to care. The unifying theme of In Search of Lost Time is that it’s very difficult to be an artist. Marcel takes his first real steps towards an authentic creation near the end of the final volume. Everything until then is in vain. Now, having at last glimpsed the thing he wants to bring into existence, he finds that his palette is limited. So be it, he answers: everyone, of necessity, writes exclusively about themselves. Around us, like the phantoms of a magic lantern, revolves a world of projected impressions. Some correspond to an external reality, others don’t. Proust writes what he knows about romance, and for the reader, there’s an unexpected joy in seeing one’s own relationships slip that noose.

Proust can’t portray a kind of happiness he’s never been granted, but he knows something is out there, beyond the reach of his pen. The novel teems with references to more ideal forms of love, if they really do exist: Marcel has heard that perhaps, somewhere, they do. Proust’s vitriolic, jealous attitude towards lesbian eros, embodied by his bisexual conquest Albertine, seems to be an allergy to the inaccessible. Lesbian love is wholly feminine and excludes him. Proust dramatizes this with voyeurism; as a boy, we see him craning his neck to watch, through a window, Vinteuil’s daughter kissing her girlfriend. Even Proust’s misogyny brings us flush against the limits of what he’d seen, personally, and could hope to understand. Few other novels are so forthright about the omniscience they lack.

As for Proust’s foolish elitism, it’s wrong to take an excessively hard line: his fantasies about the aristocracy are hardly any worse than our modern deference to people who are (for any reason whatsoever) more famous than ourselves. Moreover, he slowly sheds every social aspiration he originally cherished. Marcel, like Proust, ends up leaving society for good, becoming a recluse who writes about the very same parties he refuses to attend. He lives alone but writes about frantic, consuming romances. This isn’t a contradiction. It’s alchemy. Proust turns the things he did instead of writing into a literature of dazzling shorelines, decadent salons, and fabulous champagne. He analyzes everything, and even if the game’s not quite worth the candle, Proust comes by every one of his moral pronouncements the hard way. When he holds an evening with the cream of Paris up to a bright satiric flame, he’s burning down the same facades he used to cherish and defend.

Had Proust become a philosopher, or a self-help guru, he would’ve kept more of those hollow outings to himself. He would’ve written less, in a plainer style, as though his accesses of wisdom came to him unbidden. But they came to him over time, slowly—so slowly, in fact, that he agonized daily over his wasted life and untapped talent. When Proust writes about his childhood, boring us all in the process, he’s wild with joy that he can remember it so well. He doesn’t notice the monotony, and since he’s only just begun to write, he’s still far from the height of his powers. His feet of clay, as the author of Swann’s Way, are the hard evidence that proves Time Regained is for real. Proust had a most rare vision. At first he hardly knew how to put it into words.

The endless fifth volume, which drags Marcel’s relationship with Albertine out forever, puts the reader through a miniature version of something Proust endured for years. Every page of The Captive & The Fugitive represents another day when Proust didn’t change his life, even after he knew what was needful. And then, when he was long past expecting to make good on his writing, something incredible happened. His life did swerve onto a new and better track. The miracle hadn’t missed him after all.

Of course, you already know what I’m going to say next. It is too late for you. I’m sorry, I really am. It isn’t fair. But the news isn’t all bad. You were thinking of staying in tonight anyway. Things being what they are, you can certainly make time for a good, long novel like this one.