Sixth got no respect above Central Park, either… 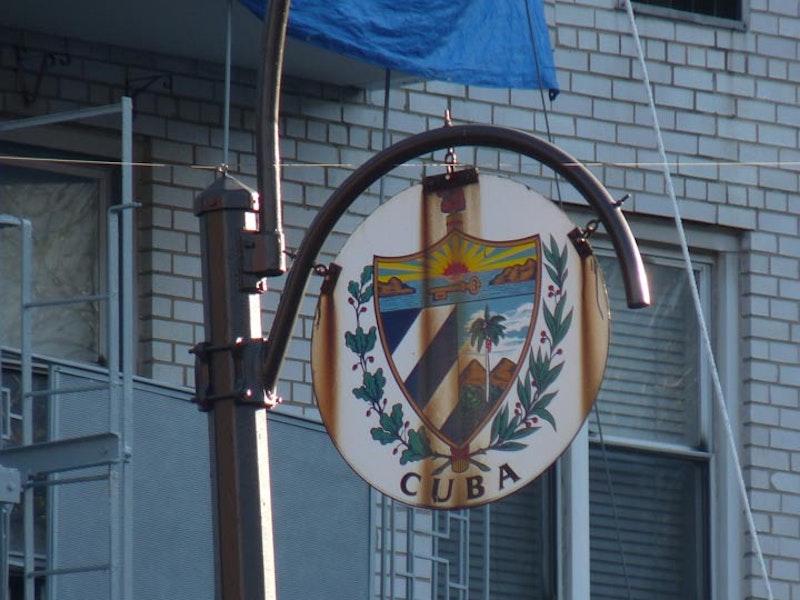 An unusual lamppost treatment along 6th Ave. appeared in the early 1960s when medallions mounted on then-new octagonal aluminum poles represented countries in the Organization of American States. (Sixth was “renamed” Ave. of the Americas by Mayor Fiorello LaGuardia in 1945.)

Throughout the years, the Department of Transportation has winnowed out the medallions; an entire section of them were eliminated about 1992 when a flock of new retro Bishop Crook lampposts were installed. Today, the medallions have two bastions: Greenwich Village and the few blocks of 6th Ave. south of Central Park.

New Yorkers have always referred to it as 6th, however, and in the 1980s the Department of Transportation finally gave in and installed new “6 AVE” green-and-whites along its entire length.

Sixth got no respect above Central Park, either… it was renamed Lenox Ave. in 1887 for James Lenox, whose collection formed the original New York Public Library; exactly 100 years later, it was subtitled Malcolm X Blvd. Sixth Ave. is the southernmost of all numbered NYC Aves., extending down to Church and Franklin Sts.; most NYC numbered Aves. begin their upward march at about Houston St. or streets to its north. 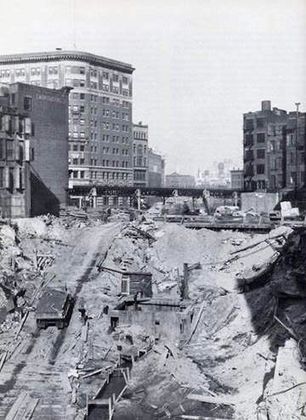 Why does 6th Ave. start almost an entire mile south of the other avenues? The answer lies in the creation, in 1924, of the new Independent Subway, to be run by the City of New York to compete with the then-privately held Interborough Rapid Transit (IRT), Brooklyn & Manhattan Transit (BMT) as well as the various elevated lines all over Manhattan, Brooklyn and the Bronx. The IND first broke ground on March 14, 1925 at St. Nicholas Ave. near 133rd St., a section that became part of the present 8th Ave. line, designated the A train.

IND construction followed for the next 15 years, with a break for World War II, and employed over 10,000 people. There were two main trunk lines, along 6th and 8th Aves., to be connected along 53rd St. (exactly following the path the old 6th Ave. El took with its connection to the 9th Ave. El). One branch would run along Houston St. and out to Brooklyn via a tunnel under Rutgers St. Another would run south to Hudson Terminal, then turn east, running under Fulton St. to Brooklyn. But what St. would that branch run under?

In 1925, 6th Ave. terminated, rather abruptly, at Carmine St. and Minetta Lane. It enjoyed a single block of daylight before the 6th Ave. El rumbled over it, turning from W. 3rd St. It was decided that the IND would have stations at W. 4th, Spring, Canal and Hudson Terminal (Chambers St.) and run under Church St. But how to get there?

Property was condemned and razed, and the IND was rammed through in a diagonal line from the planned W. 4th St. station to Church St. When the subway was finished, the new southern section of 6t h Ave. was born. The New 6th also gave motorists another option downtown to reach the new Holland Tunnel, opened at about the same time. Unlike the southern IRT expansion a dozen years earlier that gave birth to 7th Ave. South, it was decided to renumber 6th Ave. and begin it at Church and Franklin Sts. 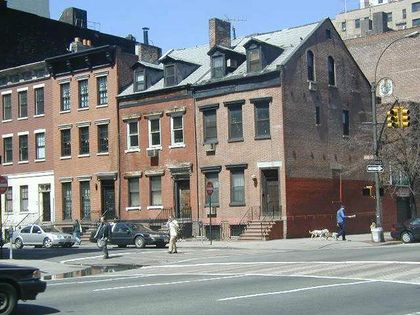 When you are roaring up 6th Ave. in a cab sometime, take a look at the edge of some very old houses at King St. They’re part of the Charlton-King-Vandam Historic District and comprise some 72 Federal- and Greek Revival-style houses, many of them built as early as the 1820s. They stand on land known from the late 1700s as Richmond Hill.

The land had passed down from the Dutch era, the late-1600s, from a freed slave called Symon Congo to Trinity Church to British major Abraham Mortimer (who built the mansion that gave Richmond Hill its name). After the revolution, Richmond Hill became the official residence of the Vice President for just one year when the Capitol was located in NYC. In 1794, Richmond Hill became home to Sen. Aaron Burr, later Vice President and Alexander Hamilton’s killer in their 1804 duel. In 1817, Burr sold the property to fur magnate John Jacob Astor, but the mansion’s days were numbered when Charlton and King Sts. were cut through. It was placed on logs and rolled 45 feet away from the St. This bought it some time, and it survived as a tavern, a country resort, and a theater; it was razed in 1849. Meanwhile, Astor saw a profitable real-estate investment at Richmond Hill and built dozens of row houses on Charlton, King, and Vandam Sts. and luckily, most have survived to the present. 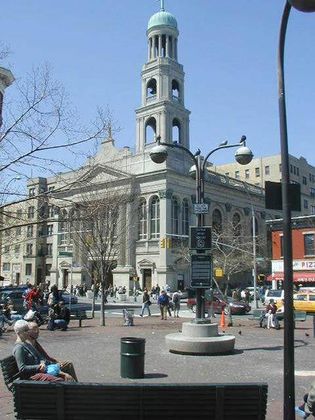 This is one of Greenwich Village’s more notable landmarks, Our Lady of Pompeii Church, the latest of the church’s many locations, built in 1928. The previous church was on Bleecker and Minetta Sts., smack in the path of the expanding 6th Ave. The pastor, Father Antonio Demo, bought the parcel at Bleecker and Carmine Sts. that had earlier hosted a vaudeville hall and St. Benedict the Moor, the first black Catholic church in the city.

Mother Frances Cabrini, commemorated with one of Manhattan’s few “boulevards” in Washington Heights, was a parishioner. Our Lady of Pompeii has Mass, confession, sacraments and a weekly radio program in Italian. Mayor Fiorello LaGuardia named the triangle formed by 6th, Bleecker and Carmine for Father Demo in 1936. 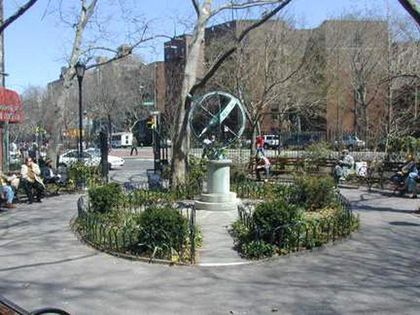 Sixth and Downing is one of the few official spots in New York City commemorating Winston Churchill. He was awarded a ticker tape parade up Broadway in 1946. Churchill’s mother, Jennie Jerome (who wore a tattoo of a snake on her left wrist and was part Iroquois Indian) was born on Amity St. in Brooklyn, and her family was the Jeromes, for which Jerome Ave. in the Bronx was named. Churchill Square is at 6th Ave. and Downing St., no coincidence, since 10 Downing St. in London is the Prime Minister’s residence. 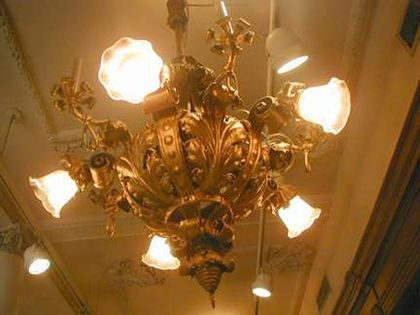 In 1838, when Martin Van Buren was President, a small apothecary opened on 6th Ave. just north of Clinton Place (now W. 8th St.), and after it had changed hands a couple of times and moved two doors uptown, Clarence Otis Bigelow had established his “chemist’s.” The present building dates to 1902; the pharmacy still occasionally displays a 1905 ledger containing regular customer Mark Twain‘s name. Note the gas jets on the electric chandeliers: they still work, and in the 1965 and 1977 blackouts, they were turned on; Bigelow’s remained open. 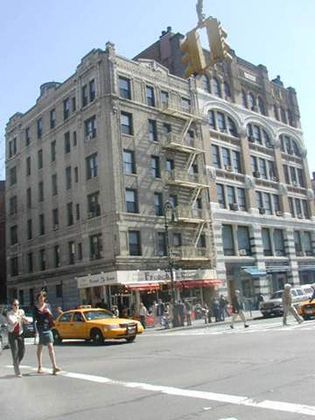 This apartment building, built in 1915 on the southeast corner of 6th and W. 11th, stands in place of an old roadhouse built in 1830 called The Old Grapevine. Village locals would congregate here to exchange gossip. During the Civil War, a certain phrase was adopted that inferred that certain information was being distributed through back channels that only insiders would know.

The phrase was, of course, “I Heard It Through the Grapevine” and, in the early 1960s, Norman Whitfield and Barrett Strong were sufficiently inspired by the phrase to write a song that went on to be recorded by several artists in Motown‘s stellar stable, including Smokey Robinson and The Miracles, Gladys Knight and the Pips and by Marvin Gaye, who had unquestionably the most successful version, hitting #1 with it for seven weeks in December 1968 and January 1969. Not a bad showing for a saloon that was torn down a century ago!