Conservative Anarchists: The Return of The Unknown Hoya 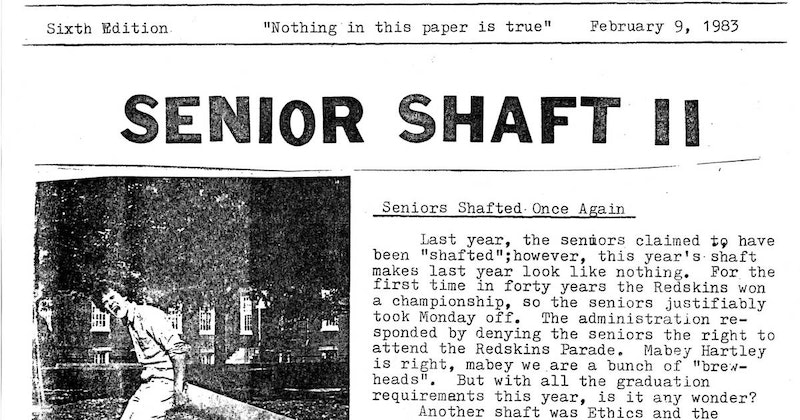 I finally got the archives back.

In high school in the early-1980s, two other guys and I produced an underground newspaper. It was called The Unknown Hoya and was a satirical and sometimes serious sheet that was distributed at Georgetown Prep, the all-boys Jesuit school where I was a student.

In the years since graduating in 1983 I’d lost my issues. This became notable in 2018, when the paper made national news. As I note in a forthcoming book, in the fall of 2018 the political left, including a couple traitorous old high school classmates, people I’ve never met, and the media tried to ruin me and Supreme Court nominee Brett Kavanaugh. Kavanaugh was a high school friend of mine in the 1980s. Using oppo research, extortion threats and even a honey trap, the left opted for the nuclear option. A woman named Christine Blasey Ford accused Brett of sexually assaulting her in 1982 when we were all in high school. That was followed by other accusations, including feverish charges of a drug and gang rape cartel.

Part of the research was The Unknown Hoya. Ian Shapira described The Unknown Hoya in the Washington Post: “The Unknown Hoya, an underground newspaper at Georgetown Preparatory School in the early 1980s, prided itself on its coverage of the crude. One issue featured a photo of a student vomiting into a toilet and an article laced with slurs against girls at the nearby Holton-Arms School in Bethesda, Md. The same issue also pitched a new school song that included a joke about rape and paeans to kegs of beer. Another issue reportedly carried photos of a bachelor party the seniors threw for a teacher that featured a stripper.”

Absolutely ridiculous. As one high school buddy said about the piece, “It reads like the indictment at a Soviet show trial.”

Still, it was hard to punch back from this nonsense because I’d long ago lost track of my own issues of the paper. However, I knew that Shapira had been fed a few select pages of the Unknown by a bitter ex-student, and it was in no way representative of our full journalistic output.

I know this because I just got the old issues of The Unknown Hoya back. The copies came in the mail from an old friend. I’m still proud of the sheet, which could be crude but also had serious stuff and some real wit. As the other editor put it, “The reporting in the Unknown Hoya was often more accurate than The New York Times.” This is the same guy—I’ll call him Fletch because he reminds me of the Chevy Chase character—who had an inspired reply in 2018 when the Stasi media had uncovered the Unknown: “Is it too late to print a retraction?”

Armed with the actual copies of the paper, it’s possible to clear a few things up. We did not, as Shapira reported, have a bachelor party for one of our teachers. We had two bachelor parties. The first was for our music teacher, a man I’ll call Mr. Maud. The second was for our gym teacher, a dude I’ll call Coach Tom, after Tom Selleck. Coach Tom had a 1980s Tom Selleck mustache, causing him to catch the nickname “Magnum P.E.” We also did a straight news story on Mr. Maud’s wedding, interviewing him about all the details. Mr. Maud wrote us a letter afterwards, which was featured in an issue of the paper: “I would like to thank you for the quite tasteful and accurate interview in The Unknown Hoya (which was given against the advice of a few other faculty members), and for the bachelor party, which was more than a little surprising in nature, size and enthusiasm.”

Mr. Maud also mentioned his new bride, Teresa, who “has been keeping up with all the details and thought the last issue of The Unknown Hoya was hilarious. So did I.” As for the stripper—let’s just say that to this day there’s some confusion about whether we hired a stripper or a belly dancer. The world may never know.

The larger point is that it a group of 18-year-old guys drinking beer and hiring strippers is not news anyplace other than the Stasi dystopia favored by people like New Puritan Ian Shapira and his humorless masters at The Washington Post. H.L. Mencken once described himself as a “conservative anarchist.” That’s what most young people in America used to be. For his entire life Mencken lived in the Baltimore house he was born in. He loved family, classical music and beer. Yet Mencken wrote savagely against religion, particularly Christianity, as well the political and cultural scene in America, a country he feared was controlled by illiterate scolds, killjoys and “mountebanks.”

Conservative anarchy was the driving force behind The Unknown Hoya. We were Catholic boys in a private school and loved football, girls and beer, but we also wanted to mock the authority that was trying to shape us. We were often right, as was the case with one Ethics teacher who wound up leaving the Jesuits to move to San Francisco with a former student. There were others, guys like Bernie Ward, who became a liberal talk show host before getting arrested for sending child pornography. We loved many teachers like Mr. Maud and even Magnum P.E., but pushed back hard against the hypocrites and the moralizers.

When I got my old Unknown issues in the mail, I contacted my buddy and co-editor Fletch to ask him for an official, on the record statement. He responded: “The Unknown Hoya was an organic and authentic expression of youthful creativity and collective senioritis. It continues to shine in middle age as a reminder that we were in fact more cunning than the powers that tried to suppress us.”