For the Sake of the Living

A review of What Remains? Life Death and the Human Art of Undertaking by Rupert Callender. 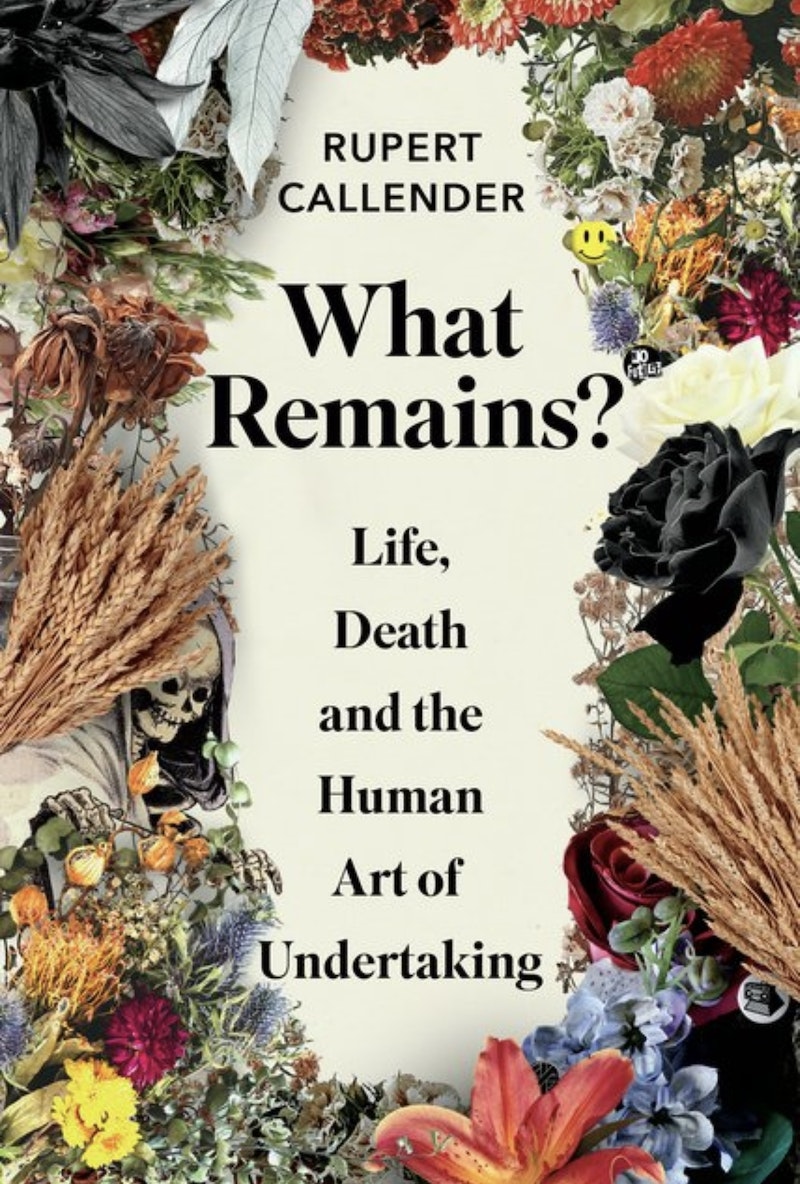 One of the interesting bits of information I got from reading What Remains? by Rupert Callender, is the origin of the word “undertaker.” It’s not, as you might suppose, anything to do with the fact that undertakers bury people, taking them down under the earth. It refers to a pledge or a contract. The undertaker undertakes to go through the process of dealing with the remains of your dead relative. He, or she, undertakes to stay with you through this vulnerable time, to act as your guide or companion, until the job is done.

As Callender puts it: “You promise to undertake to deal with the dead for the sake of the living.”

At some point the word fell out of favor. It was replaced by the euphemistic term “funeral director.” Less visceral, less earthy, less likely to offend, the term suggests someone who’s simply making arrangements to make sure that the funeral goes off okay. No suggestion of dealing with the intimacy of a dead body, of washing it and dressing it, of caring for it, before it’s finally dispatched, by burying it underground, or burning it in an oven.

Callender calls himself an undertaker, and has been one for nearly 20 years. He was, if not born for the role, radically reconstructed by life and circumstances to make it almost inevitable. He says he thinks about death every day, and has ever since his father died, suddenly when he was seven. He never attended his father’s funeral. He should’ve. It was, he says, “the single most important driver behind why I am an undertaker.”

He was quickly sent to boarding school after this, so he suffered a double blow of grief: the death of a much loved and much missed father; and being put summarily into exile by his mother when he was most in need of her care.

What Remains? is the moving, funny, humane, heartfelt and compassionate memoir of someone wounded by grief who, through engaging with other people’s grief has found a cure for his own. It’s also radical: revolutionary even. Callender cites his spiritual ancestors as the Diggers and the Quakers of the English Revolution, as well as the San Francisco Diggers, that art-activist anarchist tribe of the 1960s youth rebellion in the United States. But it’s more than just his lineage that makes this such a radical book.

Dealing with death puts you on the edge of life. It alters your perspective on what it means to be alive. Everything within the capitalist system becomes subsumed by its requirement for profit, so that every creation turns into a commodity, and every activity becomes an industry. So we have: the music industry, the film industry, the art industry, the sex industry, the food industry, along with the steel industry and the electronics industry. The “death industry” is a step too far. How can you industrialize grief? And yet that’s precisely what’s happening within the funeral business: multinationals banking on a death bonanza as the boomers die off.

Cashing in on grief. It’s an obscene concept. Callender sets about radically altering the relationship between the undertaker and those who become his partners in the ritual of death and renewal. He takes his inspiration from crop circles and rave. I think this is the most fascinating aspect of the book. He takes the strange mysticism surrounding crop circles, and the joyous affirmation of life and relationship that’s rave, and brings them into the world of secular, non-religious undertaking. He’s often described as a “punk undertaker” and, to some degree this is true. What he takes from punk is the do-it-yourself attitude, the return to simplicity and authenticity that punk brought to music in the 1970s; but Callender is much more directly influenced by rave, being from that generation.

He writes: “A generation battered by Thatcherism danced on the roofs of our lives, miraculously unbroken by a decade of deliberate social demolition. We bonded with the people that our ruling classes had tried to set us against. We saw through the lie that as individuals we were alone, helpless and doomed. We grinned and danced and threw our hands up in the air.”

Callender’s a natural writer, sensitive to the sound and the sense of the words he’s using. It’s full of perspicacious one-liners, as well as acute insights into the meaning of life that could only have come from someone who has spent the better part of his days dealing with the outer fringes of existence. On re-reading the book I took note of every line that made me laugh, every line that made me cry, and every line that made me do both at the same time. One day I’m certain he’ll have a Wikiquotes page, alongside Einstein, Oscar Wilde and Bertrand Russell, and all the other masters of the one-line quotation in the English language: in his case, mostly under the heading of “Death.”

He has a self-deprecating sense of humor that had me laughing a lot, despite the severity of the subject; but it was one particular passage that started me crying. He describes his first funeral: a postal worker called Barry. “The pews were filled with men in red jackets wearing shorts, postbags slung to one side like some peaceful militia of correspondence.” I was a Royal Mail worker for 13 years. I also wore that red jacket and carried that bag across my shoulder. I could see it so clearly, and couldn’t help but imagine my own funeral, with ex-colleagues attending, dressed in exactly that way, mourning at my passing.

After that the book brought on floods of tears. It’s so tender, warm, and appreciative of human courage in the face of gut-wrenching grief; full of love and loving kindness; so gentle in its art, in the way, I feel sure, that Callender’s gentle with his clients when he first greets them after they have contacted him for the first time. Not mournful or morose, just quietly compassionate, authentic, real. When I die I want Rupert Callender to bury me.

Callender’s honest about his faults, and this allows him to be honest about everything else. He’s honest about the failures of the funeral industry, for example, and I wouldn’t be surprised if there's a backlash from some of the more traditional exponents of the trade. Everyone can learn from this book, particularly other undertakers. But he’s honest about drugs and drug use too: about his own drug-taking in the past, and the use of drugs by his peers during the rave years. What struck me was that books—particularly those produced by small press publishers such as Chelsea Green, the publishers of this book—are a last bastion of free-thinking in a world dominated by corporate dishonesty and squeamishness in the face of reality.

This is a book about the truth, about the search for truth. There are no easy answers here: no promise of an afterlife, no fairy-tale romanticism or optimistic sentimentality. It’s raw and real. It looks death straight in the face. It sees the corpse for what it is: the only physical remains of our lives. It doesn’t speculate about what comes after. Instead it looks for the courage and humanity of all those touched by grief, particularly those bereaved in violent or tragic circumstances, such as a suicide or the death of a child; it looks at those people and celebrates them. It sees their honesty and bravery. It gives us hope. Not hope for a life beyond death, but hope that we too can discover our own humanity before we die.