Conan the Barbarian and the Great Depression 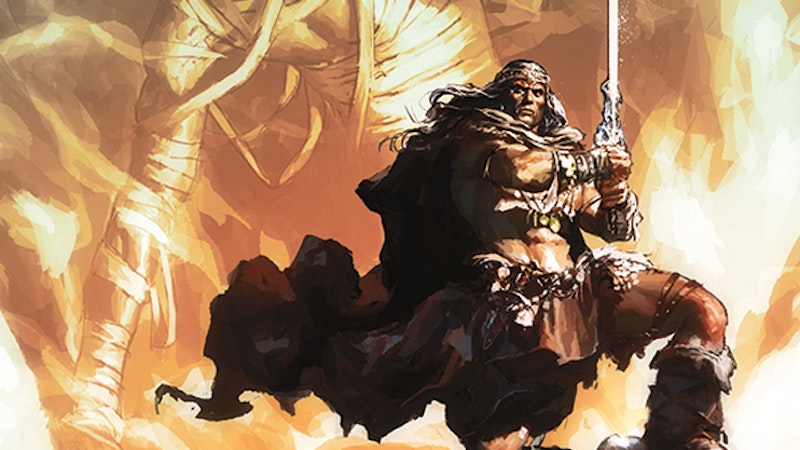 Those born after the Great Depression are lucky to never have lived through such a tragedy. Destitution, poverty, organized crime and a severe malaise dominated once wealthy nations as they struggled to regain their financial footing after the 1929 stock market crash. The rural town of Cross Plains, Texas was devastated by the financial crisis in ways that weren’t all that different from Wall Street. Consequently, Cross Plains writer Robert E. Howard transmogrified the darker elements of life in Depression-era America when he created what may be literature’s most beloved anti-hero: Conan the Barbarian.

Mythic elements form the basis for Howard’s Hyboria, the imaginary, ancient continent where the Conan tales unfold. Folkloric locales not withstanding, these stories overflow with existentialism, political power dynamics and an overall misanthropy ripped from pre-World War II newspaper headlines—the aftermath of World War I, the exploits of Al Capone, and of course the Great Depression. Even Conan’s iconic muscle-bound appearance was inspired by champion pugilists like Jack Dempsey. Thanks to a local oil boom, Howard had seen his formerly quaint town turn into a bustling, crime-ridden urban area that attracted all sorts of sketchy opportunists. Unscrupulous criminals and drunken oil workers became ubiquitous in Cross Plains, and the the writer’s idolization of boxing champs took on an almost religious reverence.

Howard’s Conan stories originally appeared in cheap pulp fiction magazines aimed at working class audiences who weren’t typically well read. With swashbuckling violence, graphic sexuality and an orphaned protagonist who witnessed his parents’ murder, Conan mirrored the complex pathos that often haunted those profoundly affected by the Depression. Howard turned soul crushing trash into literary treasure, and his works became some of the most popular pulp features to run during the 20s and 30s. The alchemy of Howard’s writing is comparable to the efforts of Depression-era scribes like John Steinbeck and Langston Hughes, as well as many pre-WWII folk and jazz artists whose personal experiences with poverty inspired heartfelt, nuanced works that spoke of the human condition in ways which continue to resonate far beyond barriers of class, race, and time.

More than thirty years after Howard's death, Conan enjoyed a new burst of popularity when Marvel Comics revived the barbarian in 1970 and Hollywood immortalized him in the 80s with successful films starring Arnold Schwarzneggar. While popular super heroes like Spider Man, Superman, and Wonder Woman faithfully served mankind with clear cut morality, Conan was a restless soul, unencumbered by any moral obligation; a nomadic loner completely unafraid of putting his own deeply hateful nature on grotesque display. Re-emerging in the dawn of the “me” decade, with the Reagan era just around the corner, the comic series came to symbolize a disillusioned America, post-Vietnam, Kent State and Watergate, with Conan controlled by a shallow lust for easy money and cheap thrills in a strange world that seemed more like a drunken Texas free-for-all than any “promised land.”