The Wisdom of the Hebrew Alphabet

Developing a fascination with language. 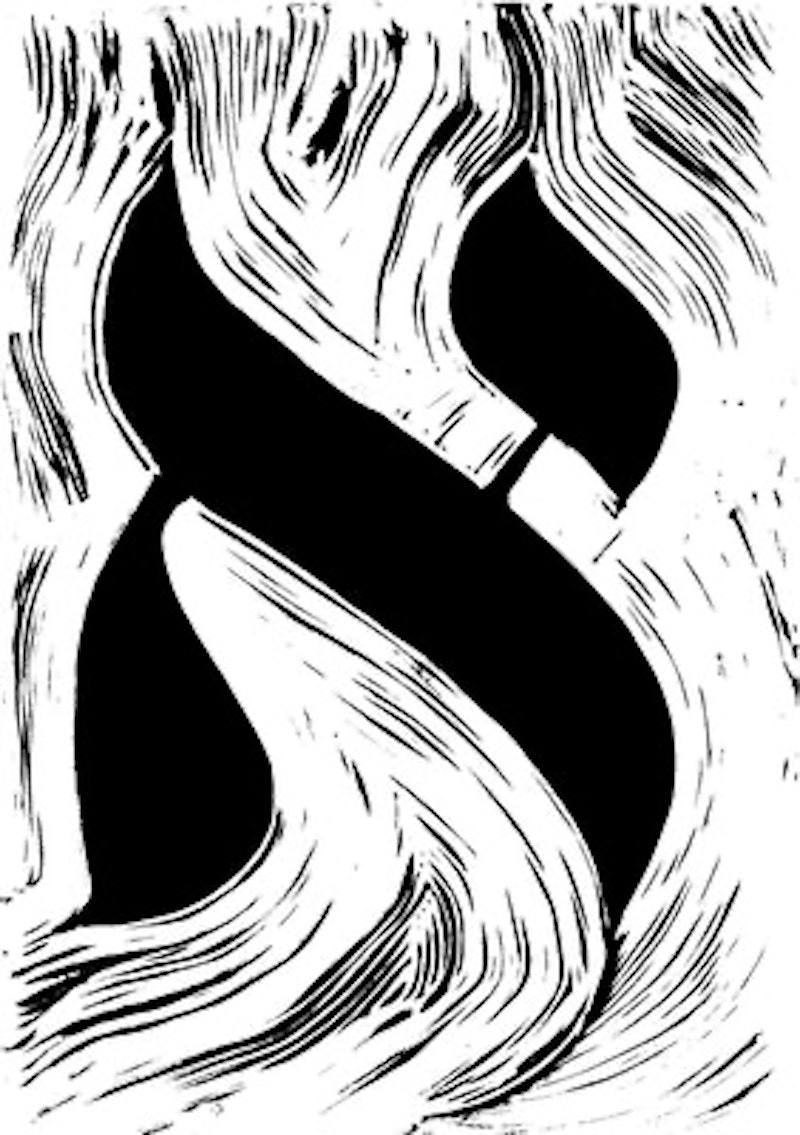 My paternal grandfather was a Torah scribe. He spent his days carefully drawing the Hebrew letters that made up the Torah, the most sacred of Jewish texts. Writing on thin parchment paper made from the skin of a kosher animal, he began by carefully marking thin pencil lines that served as a guide. He then dipped a feather quill into an inkwell and scrawled each Hebrew letter abiding by the calligraphic guidelines of Ktav Ashurit (Ashurite Script).

Each Torah contained exactly 304,805 letters scribed on about 80 sheets of parchment. Only black ink made from gall-nut juice and gum was acceptable. The height and width of each letter had to be perfect. Small mistakes could be scraped away and redrawn unless a mistake was made writing the name of God in which case he’d have to start over since God’s name could not be erased. If one letter was missing or appeared smudged then the Torah was considered invalid or not kosher.

The scribing of a Torah took up to one year. Once scribed, each sheet of parchment was sewn together to form a continuous scroll. The Torah was then sewn onto wooden rollers called Eitzei Chayim (trees of life). The Torah was dressed and shipped to a designated synagogue where it was blessed and dedicated in a sacred ceremony.

As you can imagine, my grandfather was a serious man. Scribes were supposed to be devoted and pure. He started each day with a Mikvah, a ritual bath in a sacred pool found in a temple. The immersion in water was a purification ritual to cleanse the scribe before he channeled sacred text. After praying that his holy work would be imbued with sanctity, he began each day of writing.

My grandfather was a survivor. He’d escaped the Nazis by moving his wife and son (my father) from Austria to Portugal in 1936. After the war, he gathered his savings and sent my father to America. My father settled in Los Angeles and brought over my grandparents in 1954. They lived in the Fairfax District, the hub of the Los Angeles Orthodox Jewish community.

Growing up, I spent many weekends at my grandparent’s home with my brother and sister. We were allowed to play in the backyard or run around the house. The only area off limits was my grandfather’s study. He was doing “important work” we were told and he needed his privacy.

My brother and I were curious about my grandfather’s secret work. We were always sneaking behind him, trying to scare him, to divert his attention. He didn’t take kindly to these interruptions. He’d scream in a mixture of German and Yiddish and threaten to throw a paperweight or a heavy book at us. On one occasion he threw a chair.

Presumably this nullified his purity for the day.

At the end of his workday, he finally relaxed. He’d make himself a cup of tea and watch cartoons with my brother, sister and me. Often he’d read comic books, laughing at his beloved Katzenjammer Kids and their juvenile hijinks.

Once I asked my grandfather what is was he did in his study. “I work for God,” he said.

“I write God’s story so we don’t forget who He is.”

He could tell by the look on my face that I didn’t understand.

“You know the Hebrew letters, Alpeh, Bet, Gimel? They are living things. They are the building blocks of creation. Like oxygen and hydrogen, God formed the world through combinations of the Hebrew letters.” He reached for a sheet of paper and scrawled the first letter of the Hebrew alphabet. “This is Aleph,” he said. “It tells us that God is one, that He is the Master. It is silent, it is never spoken because the true name of God is never spoken. Aleph stands for Adam the first man, for Abraham who taught us there is only One God and for Abba the Hebrew word for Father.”

“Look at Aleph,” he said. “It stands strong and upright. It is perfectly balanced, it cannot be knocked over. Hebrew is read right to left. Aleph is looking at Bet, the second letter. And Bet, it is looking at Gimmel, the third letter. What does this tell us? It says God is looking after us and it is our job to look after our neighbor. We do not see God but he is always present, right next to us. You understand?”

“You learn your Hebrew,” he told me. “And you will learn the secrets of God. It’s all in there. In the letters.”

As I got older, my grandfather and I grew apart. He conversed only with my father in German or Yiddish. Often I’d hear my name sprinkled accusingly as if I’d done something wrong. When I stopped watching cartoons and reading comics he no longer knew how to relate to me. I couldn’t relate to him either. He seemed weird and antiquated, a relic from another time and place.

He died in 1986. In his lifetime, he scribed more than two dozen Torahs. While our family sat Shiva, a stream of rabbis stopped by the home to pay their respects. They patted me on the head and spoke glowingly about my grandfather. I smiled and nodded but I couldn’t wait to get out of there and be back with my friends.

I never formally learned Hebrew. But when I turned 30, I developed a fascination with the letters. I began drawing them and studying their lines and curves and perfect harmony. These days I carve woodcuts of the Hebrew letters. I haven’t learned the secrets of God. But like my grandfather said, it’s all in there. In the letters.