A Reminiscence Of Winters Past

I've lost all access to the pleasures of the snow season. 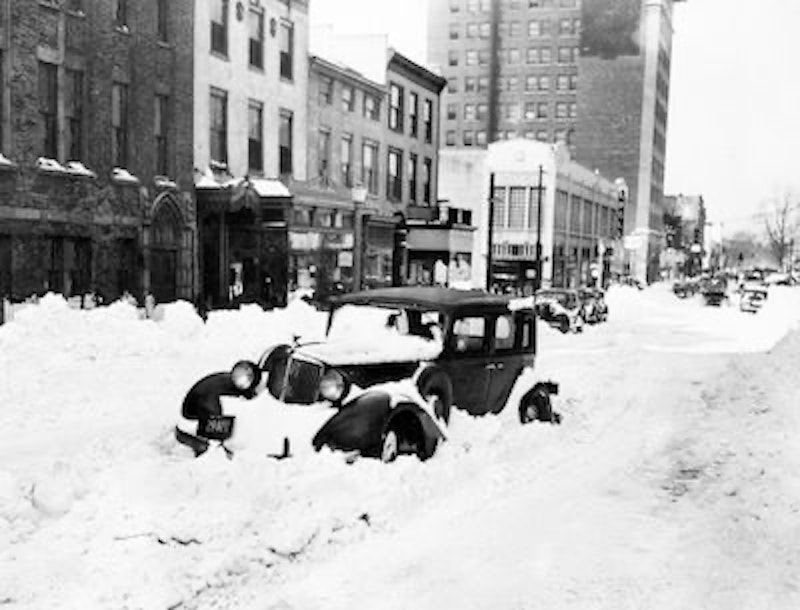 We recently had a pretty substantial snowfall here in Richmond, Virginia, which offered another yet another opportunity for us native northerners to laugh at how Southerners handle such a storm. When thinking of how scared Richmonders are of driving in trace amounts of snow, I’m reminded of the day a college buddy and I decided we wanted to check out Montreal. There was a blizzard underway, but in those days snow never stopped us from driving anywhere. We took off from Schenectady, NY and headed up the unplowed Northway, which had about two feet of snow on it. It took us seven hours to make the 220-mile trip, but we arrived without incident.

The days are short and cold now. Winter’s become a drag—just one long wait for spring—but it wasn’t always that way. Growing up in upstate New York, wintertime was something to look forward to, as it presented opportunities for fun and profit, available for a few months each year. Profit because if you were 10 years old there was always plenty of snow—two- to three-foot snowfalls were not uncommon—and people would pay you to remove it from their sidewalks and driveways. I’d go door-to-door and offer my services, which came at a bargain rate—around five dollars as I recall. Not having lived up there for a long time, I’ve no idea if kids still do this. If not, that’s a shame. A taste of entrepreneurship at a young age provides a valuable life lesson. You’re out in the snow, so it barely seems like work to a youngster.

At 10, way before helicopter parenting came along, I ran free, as did all my friends. My parents wouldn't have approved of one of our favorite winter activities—throwing snowballs at passing cars—nor would they have been very surprised to learn about it. We had a number of strategically chosen attack locations, including the parking lot of the local Catholic church most of us attended that was located on a busy four-lane thoroughfare.

Hitting a moving car from some distance provided satisfaction. There was the thumping sound of packed snow hitting metal or, even better, the sight of it exploding on a windshield. Most of our victims would continue driving after being pelted with a barrage of snowballs—there could be up to 10 of us—but the greatest thrill came when an angry man would get out of his car and come after us. Whoever spotted it first would call out, and we’d scatter. Their pursuit, in our territory, was always in vain, but always welcomed for the adrenaline rush it provided. You could say it was the apotheosis of that particular pastime.

Skating was fun too. Usually there’d be a bonfire burning next to the ponds we’d skate on. Somebody might be cooking up some hot dogs or marshmallows. But as much as I’d enjoyed skating, I gave it up as soon as I discovered skiing, which happened at a little spot in northern Pennsylvania called Denton Hill.

I eventually graduated to bigger mountains, and by the time I was in high school I was skiing three times a week—all day on Saturday, and Tuesday evening. On one ski trip in high school, at Gore Mountain Ski Resort in the Adirondack Mountains, the wind chill factor was minus 55 degrees.

In college, which wasn’t far from the Vermont border, we’d set off at six a.m. for ski resorts two hours away like Killington, Sugarbush, and Stowe Mountain. I thought that was as good as it could get until I was living in San Francisco years later and able to drive to ski resorts around the Lake Tahoe area such as Squaw Valley and Alpine Meadows.

California skiing is superior to that in New England. The mountains are higher, the snow’s a better quality (i.e. not heavy and wet), and it’s warmer—warm enough to comfortably sit outside on the deck of the ski lodge and drink beer after a long day. However, you almost have to re-learn how to ski in the Rocky Mountains and westward, as on many days you’ll be navigating your way downhill through two or three feet of fresh “powder” snow, the most exalted experience in skiing.

Try skiing like you would on the groomed and often icy slopes of the Northeast and it feels like walking through wet cement. You’ll go nowhere because your ski tips get buried. Getting the hang of it is humbling for an experienced skier. The humiliation was worth it though, as skiing through waist-deep powder while snow falls all around you is a euphoric experience. It's like you’re floating in a silent sea of whiteness. If you're on the mountain hours after the sun’s fallen, and it’s still snowing and the moon’s nearly full, you’ll get to take in a pristine and serene natural beauty.

Few sporting activities can provide the exhilaration of a whole day of skiing—it delivers on so many levels. But that’s all gone now, along with the rest of the wintertime fun that’s just a collection of fading memories. There's a unique energy inside a ski lodge that's intoxicating. It's the buzz created when so many people having a great time are all in a room together, taking a break before they hit the slopes again. I sure do miss that feeling.