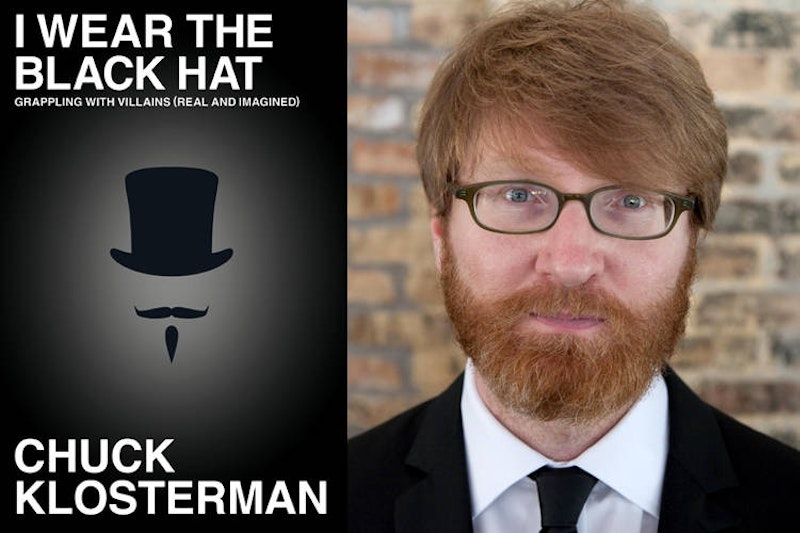 I finished Chuck Klosterman's book I Wear the Black Hat in just under five hours. I took copious notes while reading this book, because that's how obsessive-compulsive types like myself and former Associate Justice Harry Blackmun—who apparently recorded every conversation he had, book he read, meal he ate, and bowel movement he enjoyed over the course of 50-plus years—transform our leisure time into unbearable torment.

There's this delightful Mr. Show sketch, the premise of which consists of destroying the moon to boost national morale. During the course of the sketch, cast member Tom Kenny, playing an astronaut who once walked on the moon, says the following: "I've been saying we should do this for years. I walked on the moon, I did a push-up on it, I ate an egg on it. What else can you do with it?"

As I came to the conclusion of I Wear the Black Hat—an abrupt one, given that the electronic copy I had indicated that there was 25 percent more content left to read (the index counted against the remaining space)—I thought to myself, "Chuck Klosterman. I've read Fargo Rock City and But What If We’re Wrong, assigned his essay on The Real World to my students, skimmed his other more lightweight works (but not his novel, never his novel)... what else can you do with him?"

Because here's the skinnny on Klosterman: he's capable, at a moment's notice, of sharing a brilliant and unsourced thought that he’ll never follow through to any sort of logical endpoint. He's the perfect middlebrow literary figure for our time: a seeming genius whose talents are only skin-deep, a writer who can occasionally make the superficial sublime but can't ever make it interesting. He's got breadth but no depth.

That's a shame, because this book, probably his best since Sex, Drugs, and Cocoa Puffs, contains numerous worthwhile insights. Let's cut right to the single most important point he makes: “The volume of deep television writing is (suddenly) much too large; everything except the most unorthodox perspectives is instantly ignored. The expectation for those who cover modern television is that they will consistently interpret the experience of TV in radical, personal ways.”

Mind you, there's some fine material in here about O.J. Simpson (Klosterman's content analysis of Simpson's how-I-did-it manifesto is the closest thing to a deep critical reading I've ever seen from him), the N.W.A. rap collective and "villainy," politically incorrect humor, and Perez Hilton.  But these are "great Internet writing"-type moments, the sort of penny-ante revelations that cause you to say, "Huh, I never thought about it that way" and five seconds later never think about it that way, or any other, again. This bit about TV writing, though, is unforgettable because it's indisputably correct.

Allow me to elaborate: uninformed opinion-offering is what most of us lazy, sort of-educated Millennials are best qualified to do. We can write for Pitchfork; hell, maybe we can even code for Pitchfork. To prep for such important work, we watch and listen to whatever new media is important, and when time permits, we watch and listen to the classic stuff, too. Good for us. We’re undoubtedly interesting and urbane people. But most of our work will add nothing to this sub-field of the already dying-because-it's-exploding Internet writing trade. When we do decide to try some armchair philosophizing, it's almost always this sort of sloppy, silly “X show/book/movie is problematic because” critique, which can in turn be critiqued with a “saying X is problematic is itself much more problematic than X” essay.

Never has there been so much carefully constructed pop culture to criticize and never has there been so much space (infinite space, really) in which to write about it. Yet nearly all of these wonderful against-the-grain essays to which Klosterman points are total rush jobs. There's no research, no theoretical grounding... just ideas aimed at other ideas. For a turbulent world in desperate need of ballast, it's so much weightless filler. Klosterman's own half-assed discussion of Hitler in I Wear the Black Hat, which consists of some paraphrases of what a few scholarly "big names" wrote juxtaposed with one or two pieces of original thought, is a textbook example of this problem.

There are, I suppose, brainy types who can do this sort of stuff well. Joyce Carol Oates can occasionally be dragged down off her high horse and made to write an essay about the sweet science. The late Susan Sontag rattled off a bunch of powerhouse pieces. Jill Lepore, Thomas Frank, and Gerald Early have been toiling at academic-as-accessible-essayist gigs for a long time, but none possesses Klosterman's encyclopedic knowledge of stupid-bro pop culture. More obscure, more abstruse intellectuals, such as sociologist-cum-pugilist Loïc Wacquant, might occasionally luck into writing the finest book since Foucault, but if you assign Body & Soul to truculent, Floyd Mayweather or (always or, never and) Conor McGregor-loving undergrads, they'll laugh in your face and return to playing around on their cellys.

What infuriates me about Klosterman, first, is that he could be the Best Critic Since Forever (or at least since Edmund Wilson, who was good primarily because he dominated the field, and H.L. Mencken, who was great but who was also a horrible human). I enjoy his work not because it's any good, but because it's almost great (and, at least in the case of "When People Stop Being Polite," it is). He has the platform, he has the readership, and he can turn a phrase. But he’s either unwilling or unable to dig any deeper.

What infuriates me about Klosterman, second, is that I can't be him. As an academic, even a failed one, I can only dig deeper. I suppose I'm a "fox" in Isaiah Berlin's sense of the term, given that I'm content with examining a half-dozen disparate and utterly quite trivial topics instead of carefully preparing to defend one grand, "hedgehog"-like statement. Nevertheless, I'm not content with writing about, say, Planned Parenthood v. Casey without reading the full text of every opinion in that muddled decision, skimming every brief filed with the Court, and listening to the oral argument in its entirety. So it stands to reason that I'll probably never get around to writing anything about the case, because, jeez, why would I subject myself to that?

On any given day, however, Klosterman could conceivably write a series of essays about the shallow end of the American pop culture pool that somehow vindicates all of the wasted time and thought many of us have invested in such garbage. He could make this subject matter in a way that it never has before, to an audience of significant size, and in so doing leave behind something that doesn't merely win the applause of the moment, but is instead a gift left to posterity.

He won't, but isn't it pretty to think so?