Heart of the Bronx

Walking a stretch on the borough’s lengthiest street. 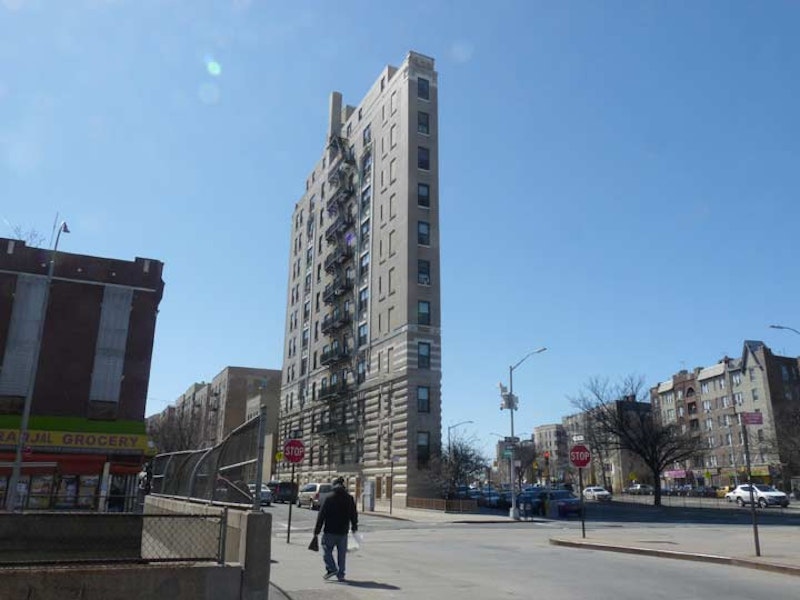 I marched from the Tremont Ave. IND subway station at the Grand Concourse east on its titular avenue all the way to the Bruckner Expressway, where I caught a bus back to Queens. I’d never walked for this long a stretch on the Bronx’s lengthiest avenue before, and I’m always ripe for something new.

The genesis of Tremont’s name is similar to that of Boston’s Tremont Street: while that city’s Tremont was named for three hills on the originally narrow peninsula where Boston grew and prospered, so the Bronx’ Tremont was named by its first postmaster for three hills in mid-Bronx: Mount Eden, Mount Hope and Fairmount. The main difference is that Bostonians pronounce it TREM-mont, while Bronxites say TREE-mont. Like many lengthy streets, it’s an amalgamation of several shorter ones and wasn’t tied together under one name all the way to the East River until 1920. As a quirk of Bronx geography, hilly West Tremont Ave. is much shorter than East Tremont, since Jerome Ave., the dividing line between East and West Bronx streets, runs in the western end of the borough.

The Bronx can boast its very own “Flatiron Building” necessitated by the intersection of the Concourse, East Tremont and Monroe Aves. converging to create a small narrow plot that’s almost a triangle but not quite. It’s one of the older apartment buildings on the Concourse, dating to 1914 (the year Bronx became a county). For a while this was the tallest building in the borough! 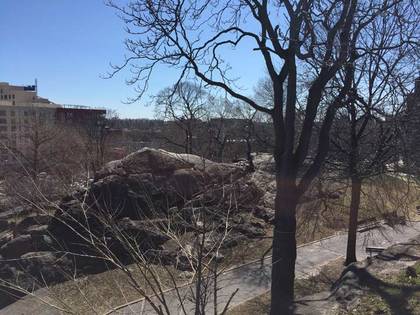 Ice-age era rock encrustations dominate Julius Richman Park, as it’s officially called. With all due respect to Richman (1915-1973) chairman of the Twin Parks Association and the Urban Action Task Force, and Assistant Administrator of the City’s Finance Committee, “Julius Richman Park” simply doesn’t carry the mojo of the park’s old name, Echo Park, so named because sound waves can ricochet and bounce off these incredible reminders of the Ice Age and return to the persons who originated them.

Probably, the Bronx street grid predated dynamite. Had this part of the Bronx been settled at a later date (the early- to mid-1800s, it’s quite likely this inconvenient rock escarpment would’ve simply been blown up so that East Tremont Ave. could proceed on a simple east-west course. Cannon could’ve been used, but that may have proved impractical. But the busy road merely curves around the escarpment, as does Valentine Ave., which begins its northward trek to Fordham here. The Bronx tries to conform to a grid pattern, but odd colonial trails spider-web off all over the borough, and natural formations like this spoiled the gridmasters’ party. 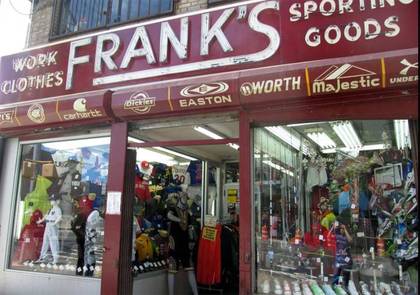 Frank’s Sporting Goods has been here at East Tremont and Park Aves. since 1921 or 1922, founded by Frank Stein that year, and his son Moses or “Moe,” as he is known, is still going strong in 2018 at the age of 89. Frank’s began as an Army-Navy surplus store but quickly expanded into active apparel, sporting goods, and yes, crossbows and shotguns, ostensibly to be used for hunting. In a 2010 New York Times article, Moe recounted that a Christmas tree vendor wished to purchase a shotgun to dissuade extortionists; he was murdered the following year. Moe’s wife, son, daughter and nephew have all worked with him in the store, which counts fishing licenses among its biggest businesses. Online reviews are spotty, citing high prices. The store boasts three classic neon signs wrapping around the corner and a shingle sign over the sidewalk, emphasizing the work clothes, guns, and tackle. 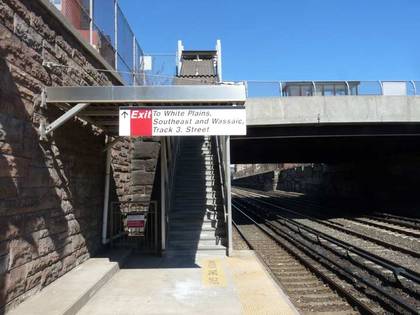 The Metro-North, formerly part of the New York Central, runs north along Park Ave. both in Manhattan and the Bronx into Westchester, where it ends at various upstate terminals. Within the Bronx, there are stations at Melrose, Tremont, 183rd St., Fordham, Botanic Gardens, Williamsbridge, Woodlawn and Wakefield. Of these only the Botanic Garden station, serving the popular Bronx Park gardens, is well–known or frequently used. Several blocks east of the Grand Concourse IND Subway, this is a relatively transit-starved area, and the Metro-North might be able to do decent business if it ran frequent local service here at a comparable price to the $2.75 MetroCard swipe, but the MTA isn’t that imaginative. 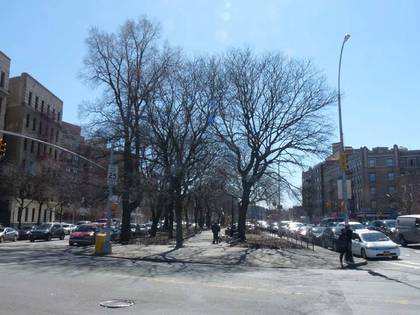 Crotona Ave., Park and Parkway are named for Croton, an area in southern Italy where Greek athletes practiced for the ancient Games. The Croton Aqueduct, meanwhile, is named for the upstate Croton River, which may or may not have the same derivation. Crotona Parkway, a corridor-like extension of Crotona Park, runs on the east side of Southern Boulevard from Boston Road north to the SW edge of Bronx Park at the zoo, making the busy route somewhat resemble Brooklyn’s Ocean Parkway. The parkway was opened in 1910. 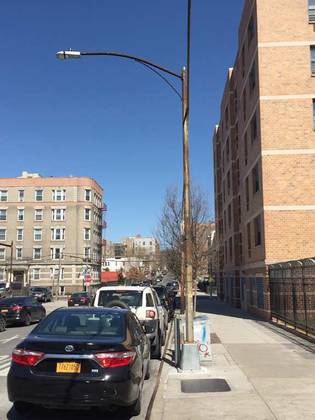 On Honeywell Ave., just north of Tremont, I made a surprising discovery, a curved-mast New York City lamppost. These once numbered in the thousands in NYC streets, and were first installed in 1950. The curved mast with a single supporting bracket design didn’t last long, though—it was used only in the 1950s, and was quickly supplanted by other forms such as the straight mast and “cobra neck.” Lamppost buffs know what I mean. For the rest of you… 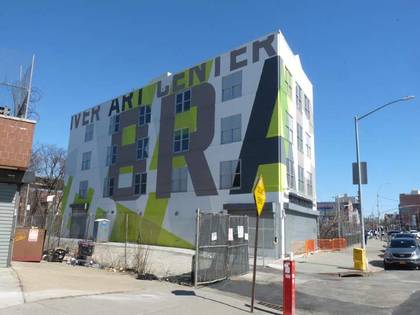 East of the elevated train at Boston Rd. (which does go to Boston as US Route 1 if you stay with it) East Tremont Ave. crosses a bridge whose walkway is protected by a wire screen. Most motorists never notice that they’re passing over the swiftly rushing Bronx River, said by many urban naturalists to be the only true river located in the city, though there are smaller brooks and streams in the Bronx.

Nature (with human assistance such as the Bronx River Alliance) has reclaimed several sections of the Bronx River from the industrialization it had been subjected to beginning in the early-1800s.

East of that is the Bronx River Arts Center building. The organization was founded in 1987 to bring arts programming and environmental experiences to the West Farms neighborhood, which historically has been culturally underserved. The building has received a new painted design, with its BRAC initials wrapping around the side, so amusingly, it looks like the “BRA” Building when you approach it east from Boston Rd. 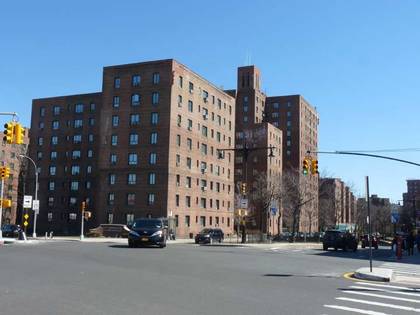 Crossing White Plains Rd. (which does not go directly to White Plains) East Tremont Ave. runs along the north side of Parkchester, including a mile-long stretch between Unionport Rd. and Purdy St. that must’ve been prime territory for drag racers given that there are no intersections whatsoever along the stretch.

A walk around Parkchester, called a “city within a city” by The New York Times when the project first opened, is an experience that will delight anyone with an interest in urban planning and a sharp eye for detail.

Met Life provided Parkchester with a rather whimsical style. While the tall seven and 12-story buildings appear somewhat monolithic when viewed from afar, a walk around the complex reveals the friendly face Parkchester presents: its generous employment of colorful, playful terra-cotta statues and sculpture. Keep looking up, toward the top floors, and you’ll see items such as angels, firemen and accordion players.

Met Life chose Federal Seaboard Terra Cotta Corporation for the project. The company supplied over 500 statues of hula girls, farm animals, and other unique accoutrements as doorway ornaments, as well as elaborate designs for theatres and storefronts, some by renowned sculptor Joseph Kiselewski. 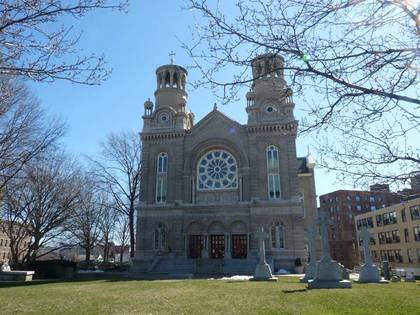 Twin-steepled St. Raymond’s Church, East Tremont and Castle Hill Avenues. The parish was instituted by the Reverend “Dagger” John Hughes in 1842 and after waves of immigration caused the congregation to burgeon rapidly, the present large church building was constructed in 1898. The parish runs St. Raymond’s Cemetery, in two separate and equally large plots, on Schuylerville along the Hutchinson River Parkway. The cemetery is the permanent home of singer Billie Holiday, actress Lois Nettleton, mobster “Fat Tony” Salerno, and boxer Hector “Macho” Camacho. 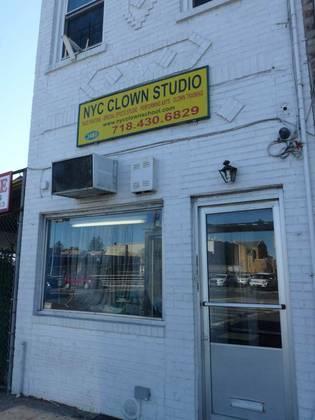 Fluffy The Clown, otherwise known as Milton Sheppard, runs the New York City Clown Studio at East Tremont Ave. and the Bruckner Expressway, adjacent to one of New York City’s prime costume suppliers, Frank Bee Stores, which started as a five and dime decades ago but expanded into the clowning business. Clowning is an art that calls for a lot of skill and the willingness to dress up in crazy outfits and wear face paint, and it stands to reason that academies have sprung up to instruct prospective entertainers.

I could’ve continued on to Throg(g)s Neck, which is spelled with two g’s by locals and one by the Department of Transportation, but it’s been a  good six miles, and the Bx50 bus goes back to Flushing from here. I haven’t been to the Neck’s SUNY Maritime College grounds yet, encompassing the old Fort Schuyler, so a return visit will come sooner or later.