Silly Rabbit, Easter is for Kids

Taking a historical look at Easter. 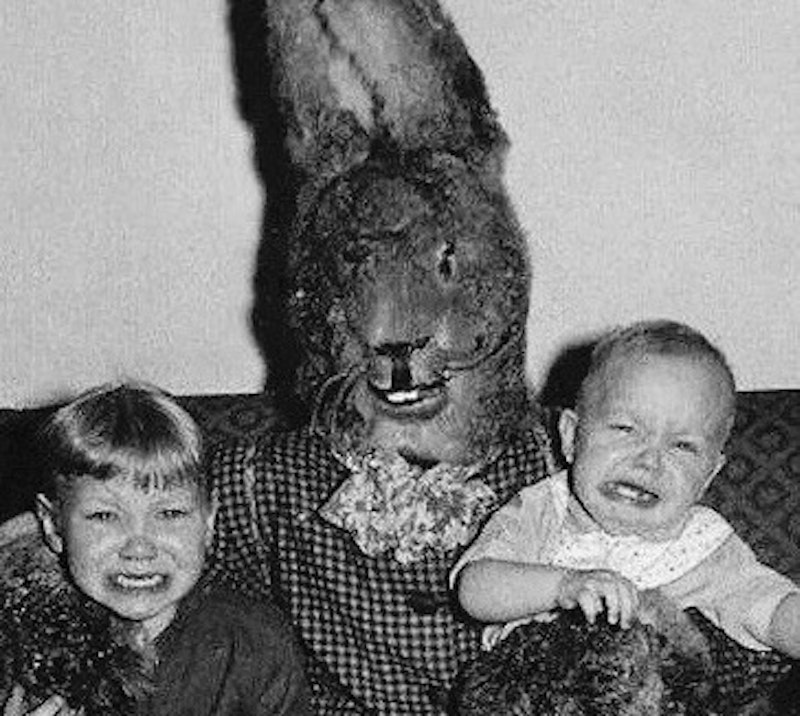 Easter was always like Halloween and Christmas twisted together, wrapped in shiny thin foil and frilly bows. We got a huge wicker basket from the Easter Bunny, filled with colorful dyed eggs, our names written with crayons, and small gifts. Jelly beans, chocolate rabbits, bright yellow marshmallow Peeps, Cadbury chocolate eggs, Mary Sue pecan nougat eggs, tin wind-up chicks, wobble walker figures, and that fake pastel-hued plastic straw hay stuff at the bottom of the basket resembling a psychedelic bird nest. As years stacked up the baskets shrunk smaller until finally one Easter day the ritual ended. A coming-of-age moment of truth and faith. As an adult do you accept Jesus and reject sugary sweet temptation? I have the cavities to prove my choice. Jesus is just alright with me but I’m addicted to evil sugar.

The mystery of holidays combined with Catholicism was as confusing to me as money and politics. I still have no real answers. Easter was one of the grander holiday feasts. Ham for Easter, turkey on Thanksgiving, and both for Christmas. Those dinners where mothers and/or grandmas spent the early morning until late afternoon preparing the meal; devoured in less than an hour. At the kids table we drank soda with dinner and dessert, like we needed more sugar to jack us up after eating a ton of Easter candy and honey baked ham. Today the word Easter is often omitted on candy packaging and presented without religious correctness or context.

Chocolate and candy manufacturers presume their products to have everything in common with a high holy day for Christians. Does this portray their insensitive and uncomfortable take on Christian dogma? The decadent addiction of all things confectionary and Easter go together like hands in prayer with corporate heaven embracing the gods of consumption. Nobody consumes more crap than we do. The totem of the rabbit as a symbol for Easter began in America in the 1700s when Germans immigrants arrived here. They believed the Easter rabbit brought brightly-colored eggs in baskets and good children would build nests of hay. The decoration of eggs dates back to the 13th century. What came first the rabbit or the egg? I’m too chicken to ponder that puzzling mystery.

The proliferation of rabbits in our culture is everywhere. The lucky rabbit foot attached to a keychain promises good luck for you, but not the rabbits. Their fur lines gloves and adorns collars and hats and they make a fine stew or fricassee too. Welsh Rarebit contains none. The cartoon rabbit was made famous by the Warner Brothers creation of Bugs Bunny. In the immortal words of the dimwit hunter, Elmer Fudd, his arch nemesis, “I’m gonna get that wascaly wabbit.” There are hundreds of cartoon and fictional rabbits in books and animated films.

There are so many examples you could say they multiply like rabbits. In pagan and western religions the rabbit signifies fertility. In the Aesop Fable, The Tortoise and the Hare, or a more modern version, the rabbit and the turtle, the turtle wins the race by persistent dogged determination, moving slow and steady. The rabbit, on the other hand, is arrogant, self-centered and takes a nap in the middle of the race, losing it by sleeping on the job.

The first Easter Parade was in 1870 in New York City on 5th Ave. It was a cultural event on Easter Sunday where participants gathered along 5th, forming a procession of ladies and gentlemen strutting in their finery. Fashionable clothing of the day and elaborately-decorated lady’s hats were showcased to impress the less fortunate sidewalk gawkers. At its peak in 1947 the parade drew over a million people. A human sea of effete snobbery. In 1950 the film Harvey debuted, starring James Stewart who portrays an eccentric drinker with delusions. The true star of the film was his drinking buddy delusion, a 6’ 3.5” invisible white rabbit named Harvey. Harvey is a Pooka. A mythical creature from Celtic folklore. They could bring good fortune or bad luck. It means “spirit ghost” in Irish. They’re benevolent shapeshifters and known to take on human form with animal characteristics.

The classic children’s story, Alice in Wonderland, begins with a large white rabbit wearing a waistcoat and peering at his pocket watch exclaiming, “Oh dear! Oh dear! I shall be too late!” Alice follows the rabbit tumbling down a rabbit hole to begin her strange trip in wonderland. There was a candy from China called White Rabbit that was very popular in the 1970s but was recalled because it contained melamine, a derivative of cyanide poison. I ate a lot of those candies.

The Jefferson Airplane’s “White Rabbit” has a trippy Bolero-esque beat and a druggy message about pills making us large or small. We go down the rabbit hole to discover our own strange journey through life. It gets increasingly weirder as we go along. From the Easter egg roll on the White House lawn to the Easter egg hunt in somebody’s backyard. From the 60 hard-boiled eggs eaten in a challenge from a scene in the film Cool Hand Luke. To the Playboy bunny ears made famous by Hugh Hefner’s magazine. Insinuating rabbits have a lot of sex all the time. But then again you silly rabbits, we need to believe in something. A rabbit walks into a bar and…