In Memory of a Deer

My wife and I saw mankind’s hubris and his violence with our own eyes. We do not forgive. 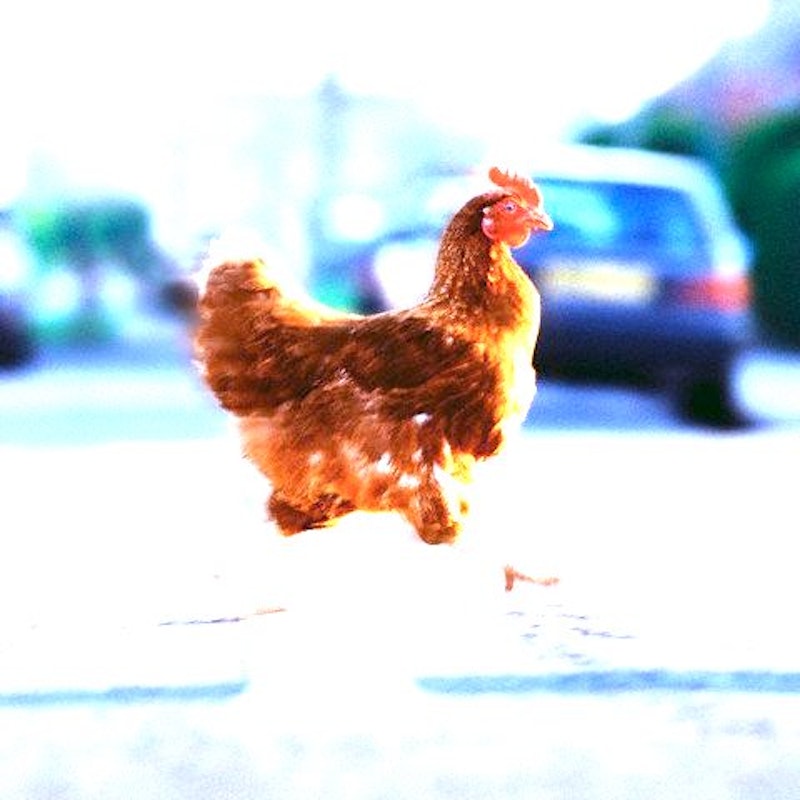 I am the first meme. Before me, no one walked. Not me, Rooster Quibbits specifically, no—any rooster. The mythological, eternal rooster. Is there a difference though? Not to brush my own hackle, but I could’ve very well been around when that famous bird crossed the street and sailed into immortality. Yet misconceptions and false ideas are perpetuated every day about our species. Why? Well, we’re food. There’s no getting around that.

All you reading this are at least implicitly guilty in the imprisonment, torture, slaughter, and consumption of our flesh. I applaud the vegans but if you live anywhere in the civilized world there’s no getting around benefitting our tormentors. Do you buy bread? You’ve killed a rooster. Do you drive a car? You’ve killed a rooster. Probably run over one, too. Drink water? From Nestle? You might as well throttle my neck and squeeze my beak from my head. My “little head.”

Some asshole turtle called me “little head” the other day and I’m still steamed about it. I love turtles, but this individual was a real crab. And I couldn’t even spur claw him. Those shells are… impressive to say the least. It makes sense to me why they’d want to hide. Have you ever seen what they’ve got going down under there? Oh my god. You don’t want to know.

My wife Monica and I were walking back from the stock market the other day, vegetables and grains in hand, when a deer appeared out of the brush and stopped dead in its tracks. I don’t mean that euphemistically, it died right in front of us. We were understandably shocked and didn’t know exactly what to do—correct me if I’m wrong but as far as I know there’s no protocol for Sudden Deer Death Syndrome. Luckily I had a candle, sage, and some roses in my satchel, so we set up a little altar and said a prayer for our fallen comrade of the animal kingdom. We were both crying, horrified by what we saw… but, life goes on, and our gumbo wasn’t going to cook itself.

There’s a particularly rough stretch of our trip from the stock market back to the barn that involves crossing a relatively busy road adjacent to the highway. I always get the sweats when we get near it but Monica’s a trooper and I am inspired every day by her. When we finally got there, not a car was in sight, so we crossed unmolested by your disgusting steel diesel killing machines, and even worse, your bicycles, you terrorists, you asphalt wreckers. I can’t tell you how many of my friends have been either killed, bothered, or mildly annoyed by your fetish for wheels.

Of course I was stewing about all of this, lost in my own thoughts (my twisted mind), when my wife noticed how much blood was covering the road. I perked up and saw how pulpy it was, and then at once, we both saw it: an antler. Or at least a piece of an antler. We made another altar and paid our respects once again for another victim of humanity’s hubris and callous indifference to the world around them. It surely won’t be the last time. But at least we crossed the road.