A brief reflection on the first time I ever asked a teaching assistant to raise my grade. 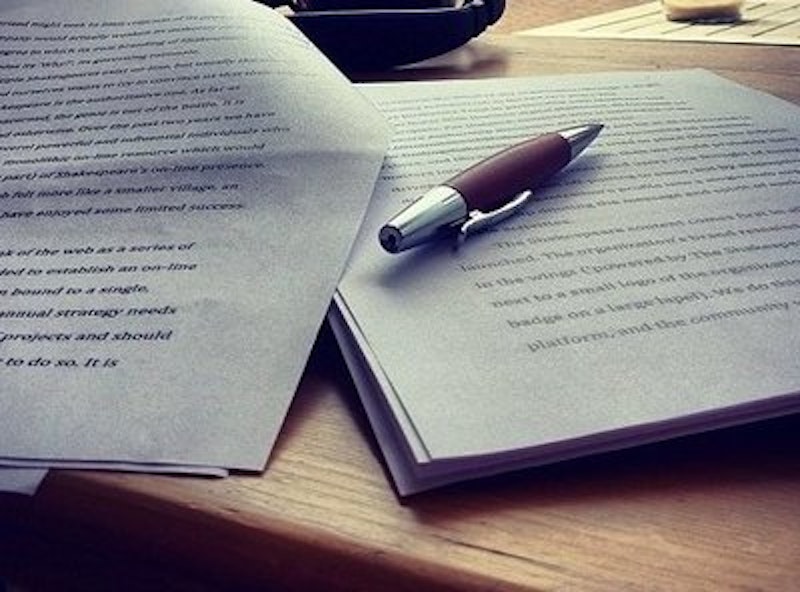 Micah the Teaching Assistant examined the paper with what he hoped was a serious look. If Micah's look wasn’t sufficiently serious, the student who sat before him demanding a thorough explanation of his grade might give him a hard time. Micah was so busy with whatever he did when he wasn’t teaching that he couldn’t bear the thought of being given a hard time.

“Well, it seems to me that your argument is a little thin,” Micah told the student, who was much larger than he was and therefore quite intimidating. Of course, Micah was a spineless, self-loathing wretch who could be pushed around by almost anyone. The grades he assigned on papers after cursory, slipshod reviews were his way of exacting revenge on a world that terrified and insulted him.

“What does that mean?” asked the student.

The student gave him a confused look. “I wrote about this topic for my honors thesis, too. I’ve read Gravelkind, Ruggleteapot, and Kamperand. I really think I understood the material.”

Even though Micah realized that he had erred in giving the paper such a low mark, he resolved to hold the line. “Be that as it may, I still think it’s a little thin.”

“Look, I think we’re wasting your time and mine by arguing about this. The fact is that it’s a little thin,” Micah insisted.

The student shrugged. “Yeah, you keep repeating that. You wrote it on my paper, too. But I think it’s a solid paper, or at least not a ‘D’ paper.”

Micah directed the student’s attention to a specific point in the paper. “You didn’t use Sociology Journal Association citations, either.”

“You told us it was okay to use footnotes,” the student said.

“That’s what I said, huh? I don’t remember saying that.”

“You did. You also took off points for not having a bibliography even though you sent me an email saying I didn’t need a bibliography.”

“I did no such thing,” Micah said.

The student handed him a printout. “Here’s the email.”

“Well, I think what is on the prompt supersedes what is written in an email.”

The student reached into his backpack and withdrew another printout. “There’s nothing about a bibliography on the prompt, either.”

“Implied? Are you kidding me?”

“Yes, when would anyone write a formal academic paper without a bibliography?”

“That’s why I sent you an email. I thought we needed a bibliography, and you wrote back that I shouldn’t waste my time preparing one.”

“Look, Ohvuh, I think you need to take some responsibility…” Micah began.

“My name is Oliver,” the student replied. “My name is right there on the paper you just read. And on that email. It’s even on the front of this varsity letter jacket I’m wearing.”

“I’m sure it has. Are you going to raise my grade?”

“You’re saying I need to accept a lower grade because you have no idea what you’re doing?”

“I’m saying you need to realize that a low grade isn’t the end of the world, Ohv, Uss… um, friend. When I was in your position, I never worried about grades. It was all about the experience for me. Process took precedence over product. Besides, the grades for this class are going to fall along a perfect bell curve.”

“Look man, you should raise this grade.”

Micah scrunched up his face with concentration. He was concentrating as hard as he could on getting this student out of his cubicle. Raising a grade was tantamount to admitting defeat, especially when the paper had been written by a student Micah thought had become too big for his britches. Even though he couldn’t remember this student’s name, he knew the student was trouble. The student needed to learn that, at least in the humanities, writing a competent paper was no guarantee of a high grade. As soon as the student realized that grading was a pointless and subjective activity, he would begin to despise the subject Micah taught and perhaps reconsider going to grad school and competing for the one tenure-track humanities position that was rumored to be opening up this decade. “You’ll need to talk to Dr. Tunnell. There’s nothing else I can do for you.”

There wasn’t anything that Micah could do for any of his students. Their awful work and their good work likewise taxed his patience. The former made him feel sick and the latter made him feel insecure. What could he do for anyone, stuck as he was in this liminal space between undergraduate and faculty member? While it might be nice to believe teachers can inspire students, when it came right down to it, that particular argument was a little thin.