Iconic Structures of the Bronx 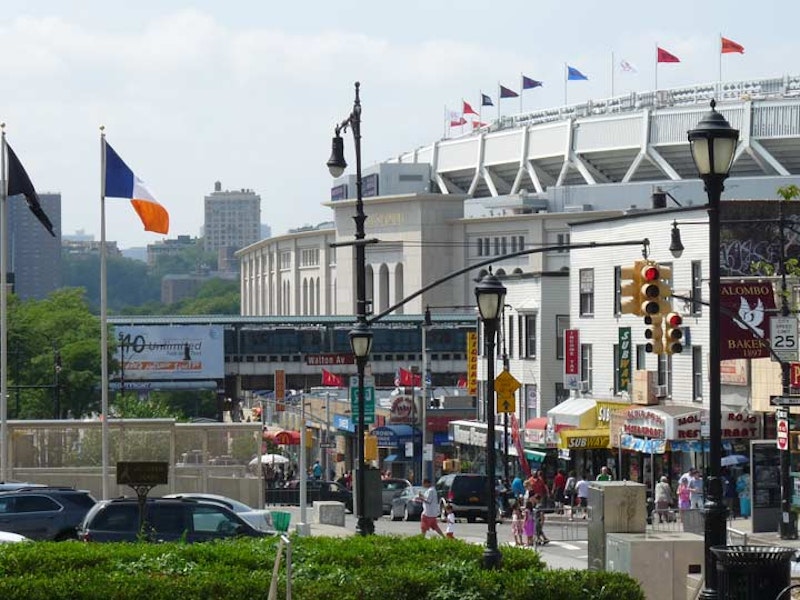 Forgotten New York, the website I run which will celebrate its 20th anniversary next year, has many fathers and mothers. We can include some of them in the old New York Press weekly in the 1990s: Paul Lukas with his “Inconspicuous Consumption” articles about strange or unremarked-upon products; Todd Seavey and Dawn Eden, with political and music-oriented columns respectively; the movie reviews of Armond White; and much more that included the ramblings, on foot and in print, of C. J. Sullivan in his “Bronx Stroll” column, in which I learned for the first time about a number of places that wound up in the Bronx section of Forgotten New York the book.  From all of them, I learned that write what you like and what you know, and it’s never really work.

In the photo above, the old Yankee Stadium once made a giant backdrop on the scene looking west from Lou Gehrig Plaza and the Grand Concourse on East 161st Street, but beginning in 2011, when the old Stadium was finally torn down, the viewer can see Manhattan in the background, with the new Yankee Stadium taking its place on the right side of the scene. The Jerome Avenue elevated, here on River Avenue, can be seen in the foreground. After his retirement following the 2013 season, River Avenue was subnamed for the great Yankees relief pitcher, Mariano Rivera. All the Department of Transportation had to do was add a final “a” to River. 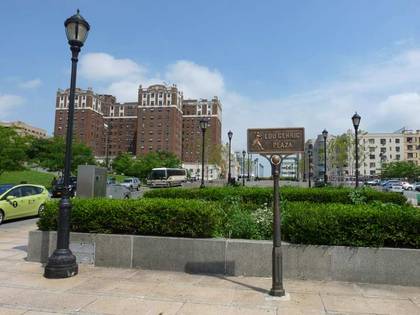 Motorists traveling on East 161st Street wishing to avoid the intersection with the Grand Concourse can travel under a tunnel running between Gerard and Sheridan Avenues. Meanwhile, the area above the tunnel between the Concourse and Walton Avenue is occupied by the newly landscaped Lou Gehrig Plaza, named for he Yankees’ “Iron Horse” who fashioned a 2,130-game participation streak between 1925 and 1939, the year he was forced to retire as he had contracted amyotrophic lateral sclerosis, a fatal disease of the nervous system.

Born in Yorkville, Gehrig attended Columbia University for two years until signing a contract with the Yankees in 1923. He began his streak in 1925, the year incumbent Yankees first baseman Wally Pipp supposedly had a headache one day and Yankees manager Miller Huggins put Gehrig in. The true story is that in 1925 the Yankees were playing poorly—Babe Ruth sat out much of the year with various problems—and Huggins wanted to give the team a spark. Gehrig had come off the bench for parts of two years and was doing quite well in that role until Huggins decided to shake things up halfway into 1925.

Gehrig performed well, but didn’t find his power until 1927, the year of the Yankees’ “Murderers’ Row”; that year he hit .373 with 47 home runs and 175 runs batted in, a year that looks nearly superhuman today. He kept this up year after year until 1939, when his disease manifested itself.

Lou Gehrig Plaza for many years has been marked by a marvelous bronze sign showing Larrupin’ Lou taking a cut. For decades, Lou Gehrig and Babe Ruth shared the plaza, and the Babe had his own sign in the shape of a baseball diamond. When the new Yankee Stadium was built between 2007-2009, Babe Ruth Plaza, and its bronze sign, were moved to East 161st Street near the Stadium front entrance. 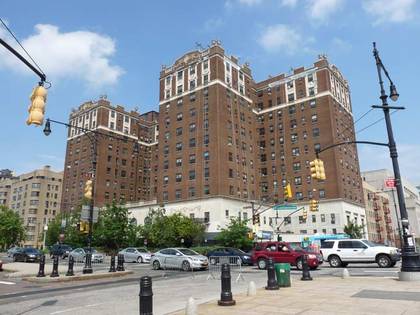 The northeast corner of Grand Concourse and E. 161st is dominated by the massive 500-room Concourse Plaza Hotel, #900 Grand Concourse, designed by Maynicke and Franke and opened in 1923, the same year as the original Yankee Stadium. It has served as a gathering place for family reunions of Grand Concourse residents, and used to play host to the New York Yankees and visiting teams.

In The Bronx in Bits and Pieces, the late Bronx historian Bill Twomey reported that when the Concourse Plaza opened the rate for one night was $3.00 for a single room and $4.50 for a double. Even in the 1920s, The Bronx was a tourist mecca with Yankee Stadium, Botanic Gardens, and the Bronx Zoo. You could honeymoon in the Bronx in those days and the hotel was always booked for bar mitzvahs and wedding receptions in the enormous grand ballroom, which had a 2,000-plus capacity, in what was then the heavily Jewish west Bronx.

As New York City went downhill in the Swinging '60s, so too did the Concourse Plaza Hotel. By 1968 it was a welfare hotel. In 1974 it was converted to a senior residence. 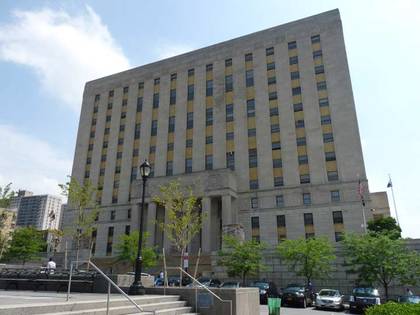 Solid, stolid, weighty, implacable. That’s the impression the passerby gets from Joseph Friedlander and Max Hausle’s 1931 Bronx County Courthouse Building, the seat of borough business. The building used to be a familiar sight over the old Yankee Stadium outfield fence. The building is enlivened by friezes, sculpted by Charles Keck, depicting classical scenes with toga wearing men discussing Important Things, half-clad women, and bovines, as well as gold colored spandrel panels above and below the windows. Free-standing sculptures at the entrance were realized by Adolph Weinman, who also created the gilded Civic Fame statue that caps the Municipal Building at City Hall, and the “Walking Liberty” half dollar in circulation from 1916-1947 (succeeded by the Franklin and then Kennedy half dollars).

The interior features a mural by James Monroe Hewlett depicting the arrival in the 1620s by Jonas Bronck, considered the first European resident of the borough that would bear a name derived from his. It was unfortunately damaged in 2013 while interior work was going on. 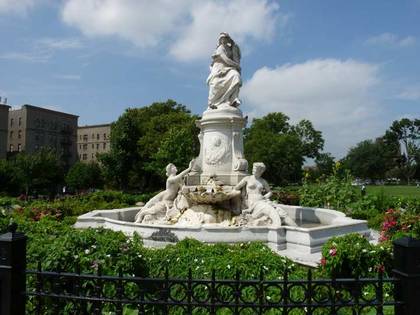 Of all the mythological creatures mentioned in the classic tales, or tails, as it were, I’d prefer it if mermaids were real. That said, I’d have a hard time meeting any since I cannot swim.

On the northwest corner of East 161st and the Concourse, Ernst Herter’s 1893 fountain statue in honor of Heinrich Heine, author of Die Lorelei, was originally rejected by Düsseldorf, the German city of Heine’s birth. A coterie of affluent German-Americans purchased the work and offered to place it in Grand Army Plaza in Manhattan. That site, too, was rejected, and the fountain was ultimately placed here in Joyce Kilmer Park around the turn of the 20th century. In the early 2000s, the fountain was fully restored to a brilliant white, given a new iron railing, and moved to East 161st Street across from the Bronx County Courthouse.

The Lorelei was a German folkloric figure, and the statue shows her seated on a rock (which is an actual rock overlooking the Rhine River) surrounded by dolphins, seashells, and mermaids. Heine’s poem depicts the maiden innocently sitting on the rock combing her hair and distracting sailors, some to their death as they crashed on the rock. 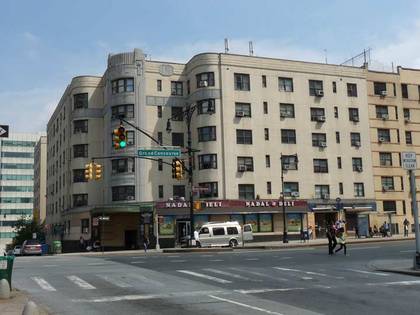 #888 Grand Concourse, on the southeast corner of East 161st, is just one of many Art Deco apartment house masterpieces built on what is properly titled Grand Boulevard and Concourse in the 1920s and '30s. #888 was designed in 1937 by Emery Roth, a Hungarian immigrant who had designed New York’s fanciest hotels—he had earlier drawn plans for Central Park West hotels the San Remo and the Beresford. The circular entrance, with thin metal banding and a ceiling mosaic, is catercorner to Joyce Kilmer Park and its Lorelei statue. Note the undulating curves—the building has no sharp corners on the exterior. 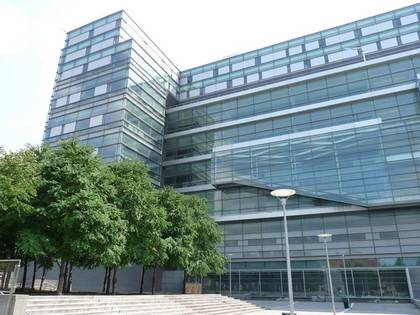 Can there be such a thing as a tree-shaded public plaza in the back of a criminal court building? Hardly a venue that lends itself to relaxation. Yet there happens to be one in the back of the glass-curtained Bronx County Hall of Justice, designed by “starchitect” Rafael Viñoly and opened in 2008. The building houses 47 separate criminal courtrooms, seven grand jury rooms, and offices for the Department of Corrections and the Bronx District Attorney. Note the “corrugated” edges on the glass and aluminum exterior, built to maximize sunlight. Some of the people who enter the building may not see too much of it again. Vinoly went on to design the immense 423 Park Avenue, which sticks a middle finger into the classic NYC skyline. 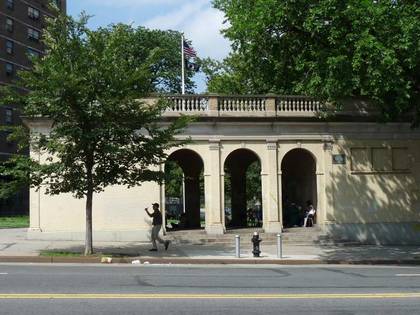 Upon reading the NYC Parks Department’s description of Railroad Park, on East 161st Street between Park and Courtlandt Avenues, I was amazed to learn that the arched structure at the park entrance is not an abandoned public bathroom, as I had thought, but is instead the abandoned Melrose RR stationhouse. I had never suspected its existence. It joins other abandoned Bronx stationhouses in Hunts Point, along the Bronx River, and in Morris and Pelham Bay Parks.

It’s also one of the older Bronx parks—it opened in 1902 and was known as Melrose Park until 2001 when NYC Parks Commissioner Henry Stern renamed it. Melrose takes its name from the Sir Walter Scott novel Melrose Abbey (the surveyor was Scottish). Waverly Place in Greenwich Village is also named for a Scott novel. 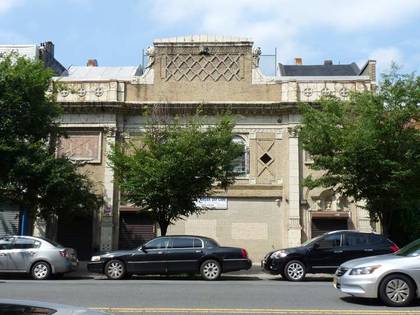 And speaking of abandoned structures, here’s 421 East 161st, between Melrose and Elton Avenues, which ostensibly is now home to a day care center, but looks like it hasn’t seen any action for awhile. According to the website Cinematreasures, in a former life that began in 1916, it was the 1,129-seat Melrose Theater, which also had a rooftop stage that could accommodate 1,100. It was converted to a banquet hall in the 1940s. However, one of the friezes is dated 1921, so the date of construction is in dispute. 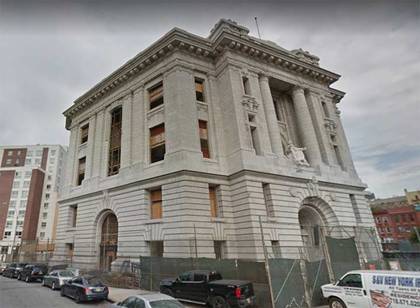 The Bronx Borough Courthouse was built when the Bronx was a borough, but not yet a county. The Bronx only attained county status in 1914 and until then it was a part of New York County, which since 1914 has been made up of the Borough of Manhattan exclusively. This building saw the newly-minted Bronx County’s first murder trial and conviction. The Borough Courthouse features two statues representing Justice, one of which looked into the Third Avenue Elevated cars as they rattled past. Yes, in this case, Justice isn’t blind.

The Borough Courthouse is located at an unusual Bronx crossroads—here, Third Avenue takes a sharp jog to the northeast, following the old Coles’ Boston Road path, while Brook Avenue angles northwest, along the path of the now underground brook the avenue follows. The Borough Courthouse replaced a country inn, Hammer’s Hotel.

The Bronx Borough Courthouse should not be confused with the Bronx County Courthouse, or the Mario Merola Building, the present home of the Bronx Supreme Court, County Clerk, Sheriff, Public Administrator, District Attorney, and Bronx Borough President. That building (see above) is located on the Grand Concourse between East 158th and East 161st Street and was built in 1933 by architects Max Hausel and Joseph Freedlander. Hausel was an associate of Michael Garvin, who built the Borough Courthouse in 1905. Between 1933 and 1977, the Borough Courthouse served as the Bronx branch of the New York City Criminal Court.

The old courthouse is rarely open to the public these days, but it has been home to art installations in the past, and its future is uncertain; but the landmarked building cannot be demolished.