Born Without a Filter

Calling out the elephant in the living room. 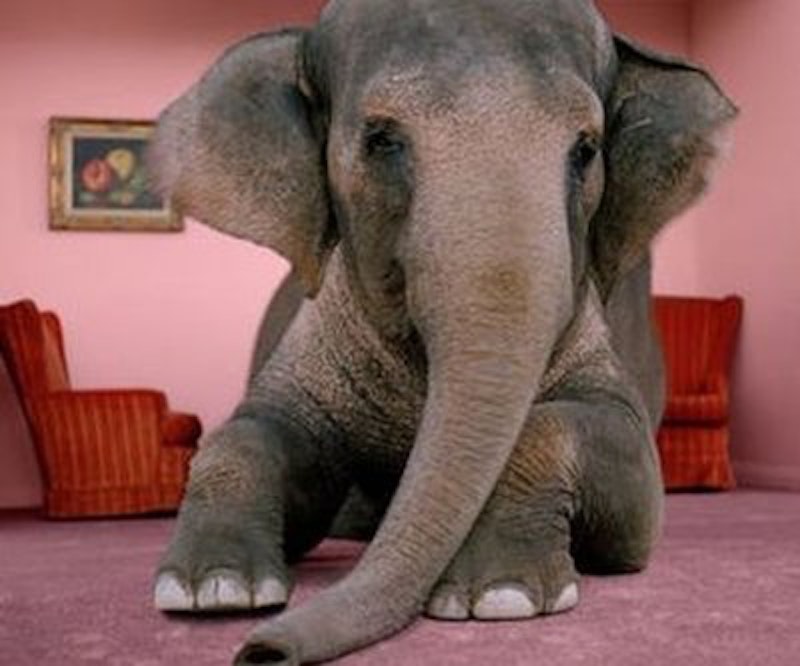 My mom always said it best: “People usually have a filter between what their brains are thinking and what their mouth is saying. And you were born without that filter.”

Unfortunately, it’s true. I’m envious of people who manage to say the right thing in awkward social situations. Tact, I think it’s called. When there’s an elephant in the living room, we’re all supposed to politely walk around it and pretend it’s not there. I’m inevitably the person to stand in the center of the room, point to the elephant, and scream about the enormous goddamn safari animal that is in the goddamn living room right in front of us and why isn’t anyone talking about it?

I’m a blabbermouth, which comes in handy for a writer. I love ranting and am thankful to have readers willing to read the rants, the rambling stories, the bizarre thoughts. But I have many more readers than friends. I’m completely socially challenged. I have near panic attacks in medium-sized social environments and often avoid them. I’m fine one-on-one in a coffee setting, and oddly I’m also a completely natural public speaker. I’m more comfortable speaking in front of a room of 500 people than I am in a jewelry or holiday party in a neighbor’s house. It’s those places I dread, especially if I have a drink or two and completely obliterate any ability to summon the level of dishonesty that you’re supposed to socially maintain.

I always manage to say the wrong thing to the wrong person. It’s like some kind of horrible social death wish self-fulfilling prophecy. I know I’m going to eventually piss this person off and they aren’t going to want to be my friend, so let’s just get it over with.

Over the years, I’ve come to accept that I’m simply not the kind of person that does well in a clique. I don’t mean that word in a negative context, but rather just as a group of people who spends a lot of time together. I didn't rush a sorority in college, either. I often get hurt and resentful about not being invited to things until I remember that everyone knows I hate those things. I’m kind of a “best friend” girl. I just need one best friend to chatter and gossip and hang out with, and I’m perfectly happy. For about eight years one time, I had that friend, and then we both moved away. I still love her dearly, but she’s too many miles away for coffee.

So I live in search of a best friend, wandering around like a pathetic lost dog from a poster, hoping someone will call the number. I don’t mean to be whiny about the whole thing. It’s my own fault I suck at friendship.

As I get older, I care less about the whole “no social circle” thing and grow more thankful of the handful of friends I do have—they must be a special kind of person to want to be friends with the likes of me. Then, I try hard not to say something really stupid to alienate them. I hope that one girl will want to be the new best friend even though I’m the girl who always yells about the elephant.