Small talk can be a big problem, so here's a helpful script for dealing with it. 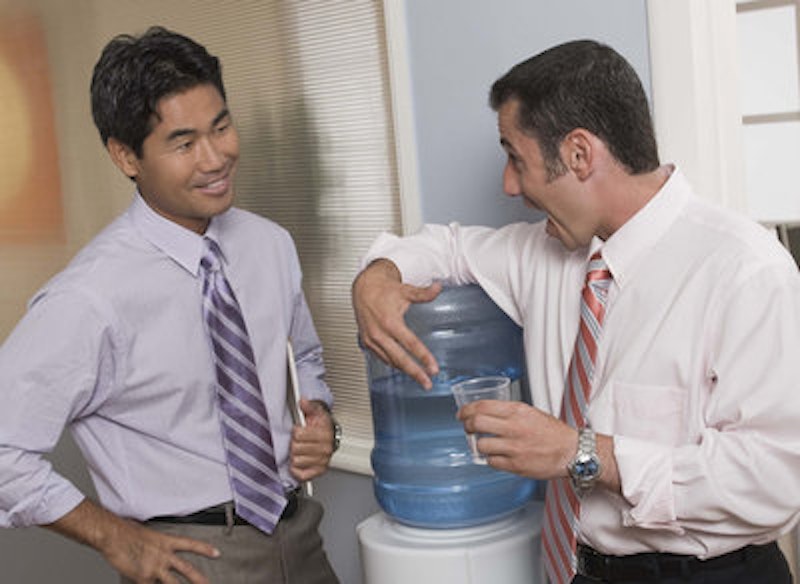 You know what I l-u-v? Small talk. It’s my fave. By which I mean it’s not, because I’m a feckless Richard Linklaterian Gen Xennial Slacker and can only be insincere or sarcastic when I’m sharing my deepest thoughts with the world. When I tell you it’s my favorite, you should realize it’s anything but.

But I’m cursed with this big happy moon face, on which resides a permanent All-American country rube’s grin, and that means people want to talk to me about pets, grandkids, the weather, and so on. I want desperately to chat about real stuff, anything that would help pull me out of the sea of despond in which I’m drowning, DiCaprio-in-Titanic style, but that’s never on the prix fixe menu.

With that in mind, consider the following a vade mecum for intrepid sorts wishing to converse with me about the non-topics of the day.

The Weather: Yes, it sure is either hot or cold. This is either unexpected or it isn’t. It reminds me of this other time we had the weather, which was one of those ones. Those times, I mean. I liked that weather. I disliked some other weather. We don’t have weather like we used to because the weather’s always changing now. So is everything else. Seems to me the only constant is change. Except for money; money is still great!

Your kids: Wow, that thing your kids or grandkids did is definitely a thing that kids or grandkids can sometimes do. In spite of that, it’s really awesome that these people you’re related to have done it, even if it’s banal as walking or spitting out a couple incoherent phrases. Also, it looks like they’re getting very tall/big, even if they’re small for their age, and they grow up so fast, even if they’re immature pieces of crap whom I know you secretly detest. Anyway, this was certainly something we talked about, and both of us will likely remember having done so for however many minutes it takes to load up spider solitaire on my vintage Blackberry and get back to the serious business at hand (pun intended, ha ha ha).

My private life/health: Well, you know how things on the home front can go. One week they’re up, and the next week they’re down. I have good days and bad days, but as long as the good ones outnumber the bad, what more can you ask for? As for these other, more probing queries of yours, I’m afraid I can’t say anything but “it is what it is” and hope you’ll make of that what you will (or won’t; heck, I’m not the boss of you). I also want to thank you for shaking my hand and then telling me about this difficult-to-shake cold you’ve got. It was downright neighborly of you to infect me as quickly as possible so that I can focus my future efforts on getting sick and infecting other co-workers. Oh, and I’m sorry to hear that your 99-year-old parent passed away. What a tragedy. Only the good die young, am I right? Billy Joel undoubtedly thought so, ha ha ha. I referenced “Only the Good Die Young” by Billy Joel because that’s a popular song from years ago and both of us are likely to remember its chorus, which contained the words “only the good die young.”

Pets: Ah, pets. What can we say? Our pets are our babies, and they’re so much like us. They do the strangest things, especially when they’re sitting like people but even when they’re not sitting like people. I saw those pictures of your pets that you posted on Instagram/Facebook/Twitter/Yik Yak/Sarahah. They looked swell and I’m sure I either liked them or thought about liking them. No matter what I did, I almost assuredly knew they were there, and that’s what matters, insofar as anything about this particular topic matters even a teensy weensy bit. Good job owning those pets, friend. That’s something you did and I can never take that away from you.

Romance: Hey, you know what they say about significant others—can’t live with ‘em and can’t live without 'em! I’m doing one of those two as we speak, and I can assure you that I harbor the same mild disgust for the selection I’ve made as every other human on this wretched planet. If I have a partner, here’s when I’d refer to them as “the ol’ ball and chain.” Please feel free to do likewise, perhaps heaving an exasperated sigh in the manner of an overdramatic, put-upon paterfamilias from a 1980s sitcom. I definitely know the feeling. I mean, I definitely know a feeling, and maybe it’s the same one you definitely know. Or even if it isn’t, let’s pretend it is and then get back to staring at our computer screens or the water cooler or whatever we were doing when the cruel hand of fate caused our paths to intersect.

Our city: Have you gone to that trendy new restaurant in the part of town that used to have poor people but now only has awful ones? I probably didn’t have a good meal there a couple weeks ago, but I’ve heard it’s good. Actually, I’m reasonably certain it’s awful and that I’d much rather eat cube steak and eggs at the diner near my rat hole of an apartment, but I’m not willing to endure the intense social pressure that would be brought to bear on me if I characterized that twee, overpriced suckfest as one of the worst aspects of consumerist bloat—“affluenza,” if you will—afflicting our late-capitalist era. Anyway, that part of town sure is different than it once was. Pretty soon nobody will go there because it’s too crowded. I already don’t, most of the time.

Parting is such sweet sorrow: Hey, it’s been nice talking to you. Nice enough, anyway. We should do this again sometime, by which I mean you should refer to this script whenever you feel the urge to communicate with me. I’m sure you’ll enjoy reading it every bit as much as I enjoyed writing it!