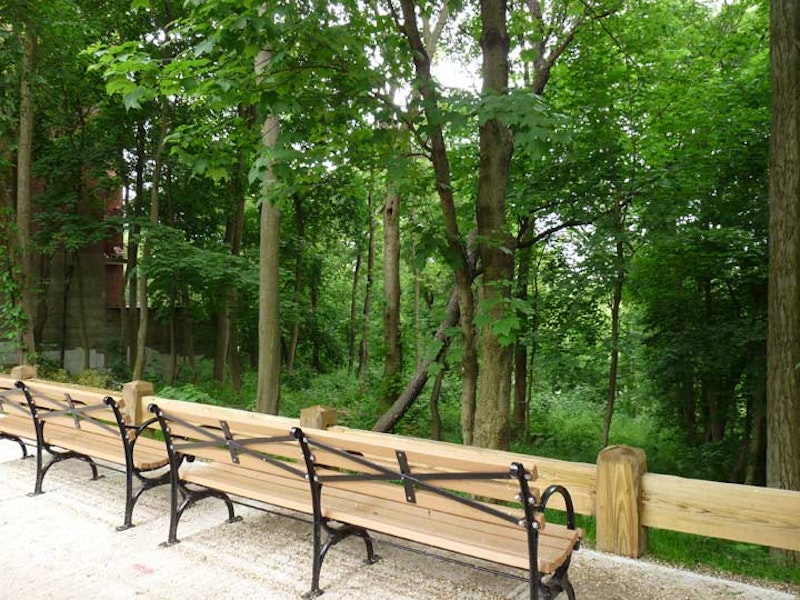 A walk through the neighborhoods of the northern part of Queens—College Point, Whitestone, even Bayside—will reward the urban enthusiast with glimpses of the small Long Island North Shore towns they used to be, as there are town centers at 14th Avenue and 150th Street in Whitestone, along College Point Boulevard between 14th and 18th Avenue, and Bell Boulevard between Northern Boulevard and 35th Avenue. The spaces between these town centers, once meadows or farmland, have been filled with block after block of one and two-family homes and seem to have been thoroughly “folded” into a bland Queens fabric: definitely not the dense, urban feel of a Soho or a Park Slope, but not the thoroughly suburban atmosphere of a Levittown or Hicksville.

By 1636, Europeans had driven most of the Matinecock Indians, the area’s original settlers, out of the area along the North Shore east of Little Neck Bay called Madnan’s Neck, after an Indian word meaning “place of fish.” Madnan’s Neck was subdivided into Little and Great Neck, after their relative sizes. Little Neck developed as a fishing village after the famed “Little Neck” clams were discovered in Little Neck Bay in the 1830s. However, the bay was overfished and polluted after a few decades, though Little Neck Bay still has a lively recreational boating scene.

I moved to this area in 2007, and while Little Neck has largely shed its consecutive rural and small-town pasts, echoes of the open country persist here. I can cross the railroad tracks at 39th Road, one of the few active grade crossings in New York City, and visit the vast Udall’s Cove Park, where nature is largely left to its own devices, spare an unobtrusive wood walkway at Aurora Pond. I can bicycle past the pond and head north into Douglaston, where at the north end of the peninsula I can spot Bayside and its Throgs Neck Bridge, the Bronx where the bridge goes, or look east to Great Neck. I can even squint on a clear day and see a pair of towers in New Rochelle, NY.

For this SpliceToday entry I headed south in Douglaston to a relatively new oasis tucked off to the side of Douglaston Parkway and Pine Street (Douglaston streets recently regained names after decades with numbers).  Until just a few years ago this was just one of a couple of still-undeveloped patches on the Parkway, but now I spotted some new benches and a sign saying “Joseph B. Hellman Overlook.” A pebbly trail led off into the woods, and I followed it to within sight of an algae-covered pond. Trails, covered by vines and overgrowth, spider-webbed off in different directions. I resolved to explore these trails further during the cold months, when they would be more navigable.

That this patch of woodland was unbuilt-on was no coincidence. Like just about any other parcel in the city it has been carefully managed and taken care of. It was indeed a pristine forest until 2006, when local resident Hellman lobbied elected officials and property owners to preserve it as such, and make it part of the Alley Pond Park complex, a much larger section of which is found south of Northern Boulevard. His aim was fulfilled in 2006, when the land was acquired by NYC Parks, which added the benches, sign, and trails in 2012. 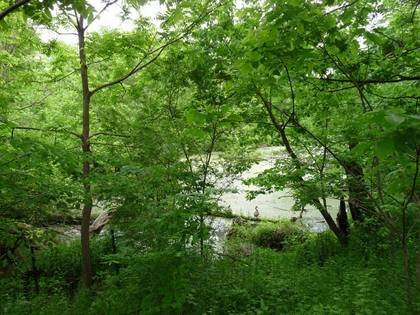 The hidden pond, known as Old Oak Pond, is not recorded on any New York City paper map, and Google Maps ignores it, as it does this relatively new section of Alley Pond Park. As my friend Sergey Kadinsky points out in his excellent Hidden Waters Blog, Old Oak Pond does show up in aerial photos from 1924, when it appeared larger than it does today. Encroaching development including the Alley Pond Park golf course may have cost the pond in some of its size. Still, it’s surprising, and somewhat exhilarating, to find an “uncharted” body of water a few blocks from my home. 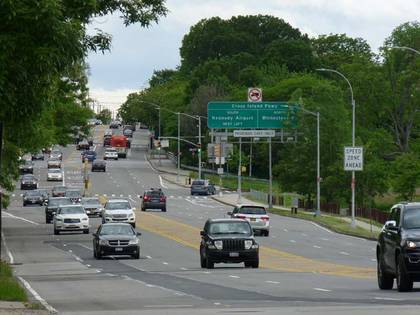 To attain the other, larger, section of Alley Pond Park, I crossed to the south side of pedal-to-the-metal Northern Boulevard, which has been the old main drag in the region since the early 18th century and was largely a Native American trail before that. George Washington traversed the route when it was a dusty trail winding through the woods, interspersed with small towns, on a Long Island tour, thanking patriots who had assisted him in beating off the Brits and winning independence. It was known by a variety of names until about 1920, when the Queens stretch was named Northern Boulevard. As Route 25A, it reaches out to the end of the North Fork at Orient Point. 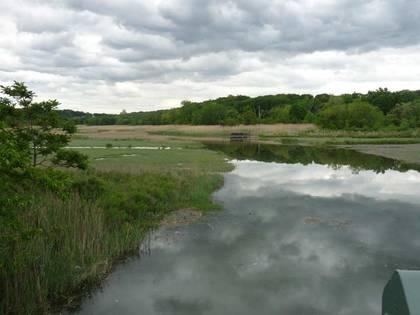 The boulevard is bridged over Alley Creek. In the early days, the region was quite hilly. Some of these hills have been leveled off, but the hills are still apparent south of here, and the creek and a number of early roads that traversed the area were named for “The Alley,” a valley of sorts between the hills. This view is to the south. On the horizon is the Creedmoor Psychiatric Facility, an Eye of Sauron to this Mordor. 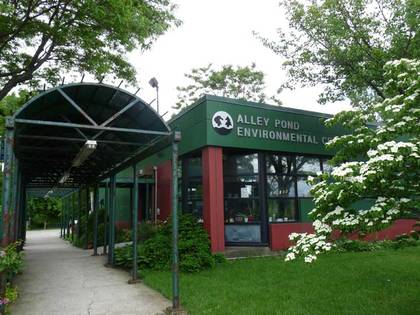 The Alley Pond Park Environmental Center (APEC), entered on Northern Boulevard just east of Cross Island Parkway, features a variety of short and long trails around the 635 acres of creeks, wetlands, and kettle ponds of the park. It was founded in 1972 and is a “learning laboratory” with exhibits on the natural habitats and inhabitants of the park, with over 30,000 schoolchildren visiting per year, but its serenity and separation from city clamor attracts thousands of adults as well.

The resident beloved tortoise at the Environmental Center, Millennium, in July was stolen by a party that apparently wanted to trade the “rare” African spurred tortoise for a musk tortoise, according to an anonymous 911 call. Something went sideways with the “deal” and Millennium was left far from home at the Fairfield Metro-North station in Connecticut. Millennium was swiftly returned to Alley Pond. Despite his name, he is just 17 years old, but with a potential lifespan of over a century. African spurred tortoises aren’t rare in their home country, but can make the claim to be the largest mainland tortoise, as the Galapagos tortoises live on an island. 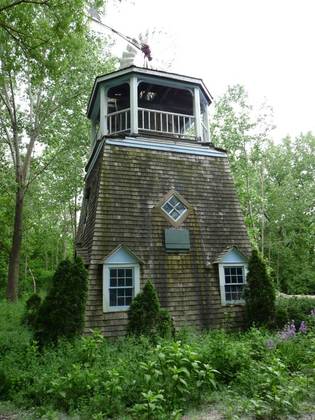 The image of the windmill plays a role in the history of New York City. Symbolic of Holland, a windmill appears on the official seal and flag of the City of New York; Dutch settlers in old New York used windmills extensively in industry. Surprisingly few old-fashioned windmills have survived in NYC, but in the Alley Pond Park Environmental Center there’s a reasonable facsimile.

The original windmill in the Alley Park-Douglaston area supplied water to a farming community on today’s Douglas Manor peninsula and was built about 1870 on what is today Arleigh Road. When exclusive homes were built on the peninsula, the mill was converted to a small two-room residence and enjoyed a quiet existence for the next 8 decades, albeit with its original identity as a windmill pretty much removed.

When the Arleigh Road property was sold, the old mill was in danger of demolition, but a committee formed to save it and in 1986 it was moved to Northern Blvd. to the Alley Pond Park Environmental Center, and a new foundation constructed and well drilled.

A local hoodlum thought it would be fun to burn down the newly restored old windmill shortly after it was installed in Alley Pond Park. Happily, funds were found to build a new windmill in the old one’s image. Today, APEC hosts regular tours and demonstrations at the mill, which is used to pump water from deep underground, and is used in the constant replenishment of the park’s plant life.