An adolescent moron won’t mock me out of my faith in God. 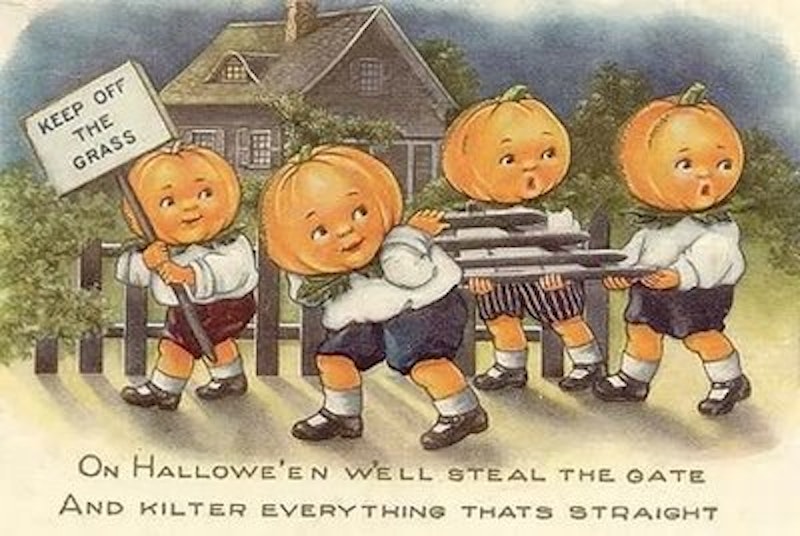 Halloween itself passed with little incident. Besides the pagan nastiness itself of the “holiday,” there were the usual pranks and bits of petty vandalism visited upon us by the local teens.

Someone left a plastic bag full of what I’m sure was human feces at the mouth of the road that leads to our homestead. And there was this year’s version of what seems like it’s going to be the yearly anti-Harris graffiti, on the boulder in front of our property, rendered in shaving cream.

This year this graffiti included no written message. There was merely a Barbasol portrait of a stick figure who did (I give the devil his due) look like me, his eyes bulging, his mouth distended by something that resembled a length of thick hose. I took it to be the hose of a hookah pipe or else the exaggeratedly thick stem of a meerschaum pipe of the sort my Uncle Harris used to smoke. If I had to guess, the pipe indicates this young vandal’s belief that I drug myself with the narcotic smoke of religion—the “opiate of the masses” in the cultural-left terms of our society today.

Opiate? This young pagan apparently doesn’t know that Jesus called us not to a narcotized peace, but to the sword.

Be that as it may, this adolescent moron won’t mock me out of my faith in God, which remains strong—the safe harbor in which I moor my soul.

Yes, tempestuous times. And dispiriting. I’m particularly “down in the dumps” to see the persecution being meted out to Paul Manafort.

No, I’m not a fan of money laundering or tax evasion. I remain mentally colonized enough by our Zionist masters that I can’t bring myself to cheer on, as Mother and Brother Aiden do, those who defraud the U.S. Treasury, even if it uses the money it collects on permanent war at the behest of cliques of well-connected Jews.

But Manafort is really being punished for helping pro-Kremlin political elements in the Ukraine. If he had allegedly committed the same crimes while consulting for foreign regimes more acceptable to our Establishment—such as the Europe-leaning and supposedly “reformist” Nazi thugs currently in power in Kiev today—there would be a tacit agreement to let him continue enriching himself, even to the point of breaking the law.

Meanwhile, and this is the most disappointing of all, Manafort garners no support even among those Russian Orthodox-convert intellectuals who have, over the years, admirably supported the brutal and corrupt pro-Russian regimes of Eastern Europe. (I mean “brutal” and “corrupt” in the positive sense here. I believe that political assassination, firing into protest crowds, and hiring street thugs to beat up and rape pro-reform Ukrainian college girls are, if brutal, nonetheless consistent with morality when they’re all employed in the service of the Holy Kremlin. And if a regime is “corrupt” in which thin-lipped White men collude with obscurantists in Byzantine-derived patriarchal church drag to eliminate the “human rights” that are just stalking horses for the normalization of sodomy, then I say—let’s have more corruption!)

Russian Orthodox mystic and world-famous academic Professor Daniel Larison, for example, rose to prominence on the basis of his learned “interventions” in support of the regime of deposed Ukrainian President Viktor Yanukovych, now in exile in Holy Mother Russia. But now Professor Larison is silent in defense of Manafort, the great Yanukovych’s loyal vassal. And where are other Russian Orthodox intellectuals, like Scott McConnell? Greg Djerejian? Philip Giraldi? Where are, in general, the wonderfully thin-lipped White snufflers and droners of the intellectual alt-right?

Mother insists that they’ve been somehow co-opted by NULAND, THE SHTETL WITCH. But that’s an absurd theory. My own opinion is that we live in a moment unfriendly to moral grandeur; an era in which, as a gifted agent of the Demon of Rome wrote, the best lack all conviction; an era incapable of producing gallantry of the sort embodied by doughty Lazar and his fellow heroes of Kosovo Polje. It is a puny age, and a rotten one—and yet I never imagined that the rot would go so deep as to afflict some of the greatest bloggers in world history.