An old joke, now with that idiot. 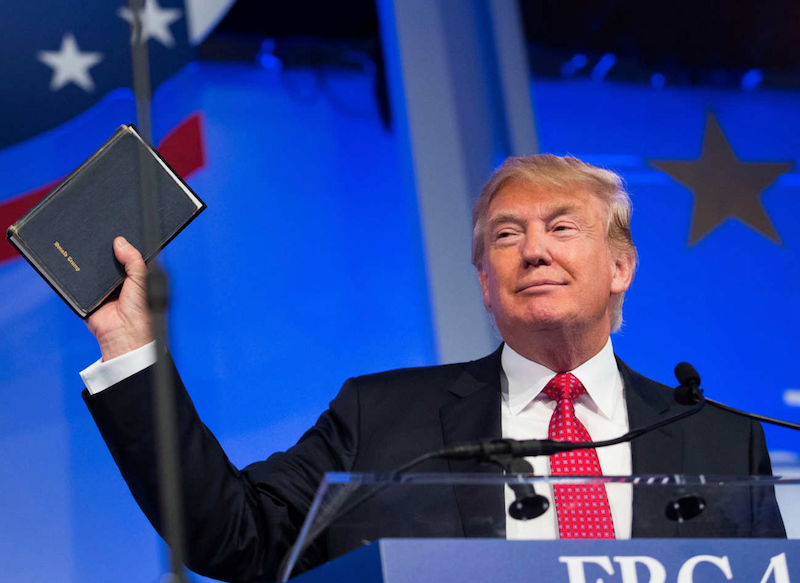 This is a good one. Father McKenna is meditating in his confessional when the booth begins to shake. Eyes flying open, he peers through the grill. Beyond it looms a bulky mass of shadows and red tie and blue suitfront. This is Donald Trump, who has clumped in from the street. For his part, Trump tries to establish direct contact with the priest. He taps at the grill, presses his face against it to see better, waves his fingers to get the priest’s attention. “Fadder,” he says. “Fadder? Fadder, yeah. Donald Trump. Nice to meet ya. Fadder”—this last one is said with voice up in a whine, to represent seriousness—“Fadder, about last night, I got to tell ya. I was banging this chick aaaand... it was kind of crazy. Getting nuts, okay?”

From there the story segues into Trump’s account of the foul, brutal, and very strenuous things that he was doing with a young woman of 19 who had blonde hair “and tits out to here, I swear to God.” These things can be added to and elaborated upon as the speaker desires, in the manner of the joke made famous by The Aristocrats. Or you can do the short version, as follows:

“She’s sucking me, she’s really going at it, ass in the air—and believe me, that ass? You could bounce a dime. I’m looking at that ass, okay? I’ve got my eyes on that ass. Because it’s quality. A superball, a dime, a coffee mug—you could bounce them all off that ass. It’s toned. And she’s going at it, at my dick. Sucking. She’s going, she’s going, and I tell myself, ‘Okay, hold it in.’ She says, ‘No mouth, not in the mouth.’ I say, ‘Yeah, all right, yeah, no mouth. I won’t do the mouth.’ I’m holding it in. But she’s back at it and she’s got this thing. Her tongue, her tongue has got this thing. It’s doing this thing, incredible, like chrome would come off a tailpipe. She wants not in the mouth and she’s doing this thing and meanwhile her ass, you could put CDs between that ass and they wouldn’t slip down. Dinner plates. That ass is toned. She says, ‘No mouth,’ and I’m like ‘All right, all right.’ And I’m saying to myself, ‘Not the mouth. Not the mouth. Hold it in. Not gonna do the mouth.’ Okay?  But she’s doing this thing. And I say to her, ‘Okay, all right—now. I’m gonna, I’m gonna’—you know? ‘I’m gonna, I’m gonna, so now. Got to stop now. Get off it now.’ I tell her. Because I’ve got a load coming and it’s really charging up there. And she gets her mouth off, and right then—bam! Out it comes, the load. I get her eye. Okay? Right in the eye. She’s hopping around, you can’t see one eye, and I swear to God, it’s like she’s a goddamned pirate.”

You’d think the punchline might be the priest saying, “And what about her ass?” But no. Father McKenna (voiced by Bob Newhart) says, “Are, are you a... communicant of the Catholic Church?” And now here we go, because Trump says, “What communicant? I’m just telling people.”