Barriers of Language and Culture

Encounters with the foreign. 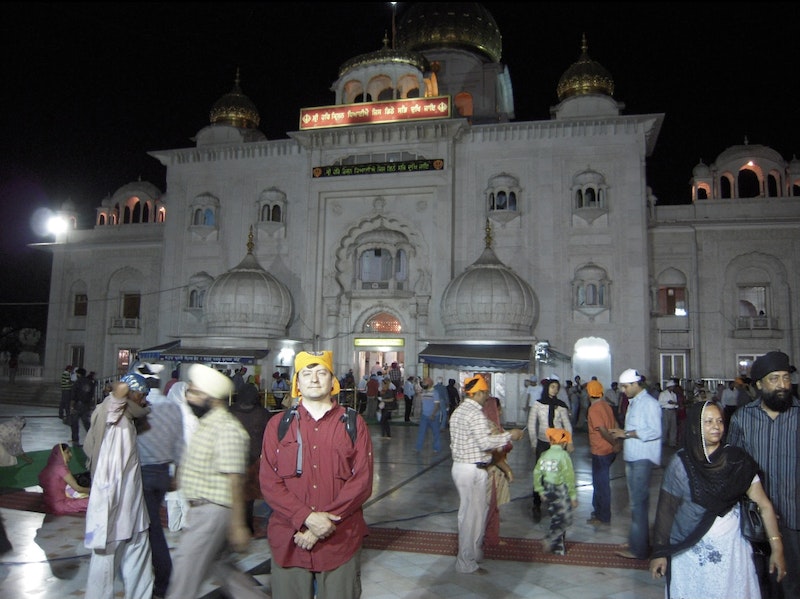 On a 2009 trip to India, my wife and I went to a large Sikh temple in Delhi, which had an office to orient foreign visitors. The turbaned man at the desk spoke to us, but I had some difficulty with his accent. The conversation as I heard it began:

SIKH: Do you smoke cigarettes?

SIKH: (Brief quizzical look.) What would you like to know about cigarettes?

ME: (Baffled.) What would we like to know about cigarettes?

SIKH: Yes, we talk about Sikhism here, not cigarettes.

Soon, I was given an orange cloth to wear on my head and told to leave my shoes at the entrance. Wanting to be sure, I asked if I was supposed to return the orange cloth when I left.

SIKH: Yes. If you want your shoes back.

A lack of facility with accents has hindered me at other times, both in speaking English with foreigners and in speaking foreign languages. After graduating from college, my friend Mike and I went to Australia and stayed a few days at a youth hostel on Dunk Island, off the coast of Queensland near the Great Barrier Reef. An Australian guy shared the room, and when I asked something of Mike, the Australian thought I was addressing him, saying “Mate” (pronounced “Might”).

I don’t remember the topic of conversation, but the structure was this:

My father was adept at languages. He told me he’d learned Spanish within a month of his arrival in the Dominican Republic as a refugee from Nazi-ruled Austria. He spoke four languages well: English, Spanish, French and his native German. Still, there were some glitches. When he arrived in the U.S. in 1946 at 21, he had some English from his schooling in Vienna, and from working for an English businessman in D.R. But his English jostled with his recent Spanish. When he first saw exit signs in New York, he thought they were wishing people success—éxito in Spanish—a reflection of the freewheeling American capitalism he’d heard about.

Erich, my father, did business all over Latin America, buying and selling beans. His interlocutors in Brazil usually spoke English, and so his Portuguese remained limited. Once, he spoke in Portuguese to a roomful of Brazilian businessmen, and every time he used a particular word, the audience erupted in laughter. Someone later told him the word’s meaning in female anatomy.

Spanish is the only foreign language in which I can have a real conversation. My American accent is heavy, more so than it might’ve been given early advantages such as a fluent father and trips to Puerto Rico, Venezuela and other Spanish-speaking locales. My sister Denise took after our father’s language knack, getting a job at the U.S. Embassy in Mexico before embarking on a career in France. My home phone gets calls for a State Department number that’s one digit different, and I’m happy to help Spanish-speakers correct their número equivocado.

My mother’s parents came to the U.S. from Germany in the 1920s. My maternal grandfather Jack, who died when I was four, spoke about seven languages, having been a merchant sailor. My grandmother Johanna’s English was fluent, but she communicated with my mother and uncles in “kitchen German,” mixing German and English, so I heard a lot of that growing up.

My father’s parents spoke Polish in the Austro-Hungarian Empire’s Galicia region during their childhood in the 1890s. As adults, when they wanted to speak without their kids understanding, they reverted to Polish. Uncle Bob, a doctor and scientist, had pretty good Yiddish, which he said was from working at a bakery in his student years. Once he and I went to a bakery to get a cake, and I was surprised to suddenly see him behind the counter tying the cake box.

Bob and I once planned to go to China, where he was to attend a medical conference. That trip never happened, which to some degree was because of the Tiananmen Square massacre. But while we were expecting to go, I studied Mandarin through a set of tapes and books. This set used Yale romanization, a system for transcribing Chinese sounds into our alphabet; it’s now gone by the wayside in favor of the Chinese government’s preferred system, called pinyin.

There were dialogues that I’d read aloud as part of this course. In one, two people discuss buying an American clock. One says American clocks are too big, and the other states a rebuttal, which I can recall from long-ago memory minus the accent marks: Meigwo jung bu do da. Ni kan, wode jung bu tai da.“American clocks are not all big. Look, my clock is not too big.”

I don’t know what motivated the makers of the course to include this curious passage, but I’ve recited the snippet to Mandarin-speakers over the decades and never failed to entertain.