Could it be that Jesus might not be the way, the truth, and the light after all? 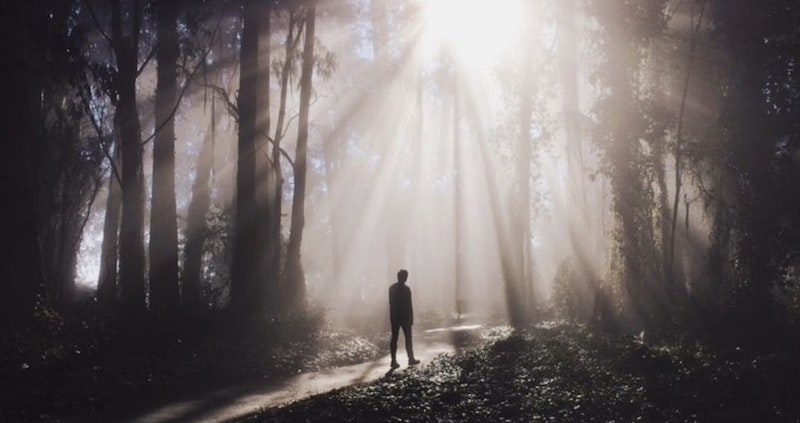 We stood together on the shore of the lake, feeling the cool water drag our feet deeper into the sand with each ebb and flow, listening. Back then I believed that if I paid enough attention, I could be like Siddhartha and hear the water chant the sacred word Om. That one word, sung by 1000 voices throughout time, would wash away all doubt and reveal the universe embodied by God. Instead, I heard nothing. Maybe I just need to listen better, as Vasudeva the ferryman instructed. Still nothing. No voice of God. No Om. Just the sounds of waves lapping, birds chirping, and everyone else at the church picnic laughing in the distance.

Jennifer and her parents often sat next to me during Sunday morning service. I never got to know them well, but they all seemed nice. Jennifer was so comfortable with herself; she’d slip her shoes off during worship, either to symbolize standing exposed before the Lord or just that she hated shoes. When I saw her on the shore that day, I joined alongside her, both of us in total silence. I rudely interrupted the silence by telling her about all the questions running through my mind: did God create this lake, or was it the Big Bang? Is Jesus the only way to heaven? Does God even exist? Maybe she had some answers. “I try not to worry too much about that stuff and just enjoy beautiful moments like this,” she said. Maybe she was right, but I was still convinced one day the water would answer.

Doubts began almost immediately after my conversion to Christianity. The first red flags came from the Bible: barbaric tales of slaughtering men, women, and children; verses explaining how total self-denial is the way to let Christ in; and the infamous “clobber passages.” I also loved studying different religions and found pieces of God in a variety of sacred scriptures. Could it be that Jesus might not be the way, the truth, and the light after all? Then there were the debates with non-believers online that always ended with me typing in all caps with rage because, even though I didn’t want to admit it, they had better arguments.

My faith was always the strongest in nature. The woods were truly God’s church: towering trees instead of a tortured Christ on the wall, birds and crickets instead of a bland worship band, and silence instead of a fire-and-brimstone sermon. “In him we live and move and have our being,” Paul said to the Greeks, quoting Cretan philosopher Epimenides. If God embodied the world, then it only made sense to find him within nature, so I started reading biology books available at the library, eventually Richard Dawkins.

It wasn’t The God Delusion that led me to atheism, but The Magic of Reality, a children’s book about the beauty of the natural world. Dawkins never outright says God doesn’t exist, but instead emphasized repeatedly that there are no supernatural forces controlling the planet, and everything miraculous could be easily explained with science. I then watched a debate between him, Daniel Dennett, Francis Collins, and Ben Carson (who was a babbling fool as usual), hoping that Collins—a biologist who believes in both evolution and Christianity—would win. Dawkins, however, kept asking where the evidence for God was. I was determined to find the answer.

The more I looked, the less I found. All signs pointed to a world that formed naturally with no divine hand guiding the process. My faith died the way my grandmother did, slowly deteriorating until one day it was gone. I mourned my faith at first, but soon realized that Douglas Adams was right: the garden was beautiful without believing there were fairies at the bottom of it. That’s when I stopped demanding answers and instead took Jennifer’s advice.

The Tred Avon River is across the street from my house. Sometimes I like to go to a nearby pier and look at the water, like I did last week. I asked nothing from the river but for a moment of rest. Tiny waves gently lapped against the pier. An osprey floated in the sky looking for lunch. The breeze tickled my bare feet dangling over the pier. The sun dialled back the heat a little for the day. A woman passed by on a Seadoo, the only motor I heard. White puffs airbrushed onto a hazy blue backdrop overhead. The river spread out before me, forever flowing towards the horizon and beyond.