The Atmospherics of the Adirondacks 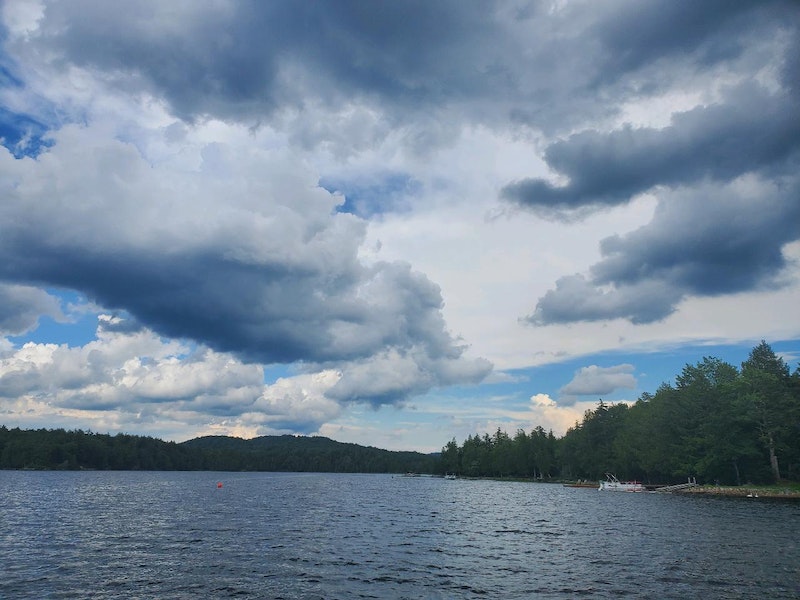 The Adirondacks are the mountain range I know best. In the 1980s, my Uncle Bob and I would stay at his small cabin in the hamlet of Onchiota, near Saranac Lake. A sign by the two-lane highway said, “Leaving 67 of the friendliest people in the Adirondacks (plus a couple of soreheads).” The cabin was a residue of Bob’s divorce; he had it just a few weeks of the year. One day he wanted to change his will, and we drove into town to see a lawyer, who tested my uncle’s soundness of mind by asking questions such as what the date was. Bob struggled to answer that, since we’d been living in the woods for days, and I didn’t know either.

There were power lines running northward toward Canada, and I left early one morning for a hike on the dirt trail under the lines, leaving a note as to my plan but taking few provisions. I walked through pine forests and swamps, seeing no one for hours. It was afternoon before I’d the sense to turn around. At one point, a car drove up, a middle-aged man taking an elderly woman on a backwoods excursion. Maneuvering the vehicle to keep me away from the woman’s side, the man asked if I’d “broken down.” When I said I was just “taking a walk,” they looked as if they faced a maniac. I got back to the cabin as night was falling, speaking in delirium to my uncle, who’d been about to search for me by car.

There’s a mountain called Ampersand that I hiked up alone. Somewhere high up was the remnant of a stone foundation and a plaque saying that “the Hermit of Ampersand” had lived there. Bob was a gregarious type who knew lots of locals, and one day someone told us there was a young woman who hiked alone in the area, and perhaps she and I should meet and do some hiking together. Sadly, I didn’t pursue the possibility.

The Adirondacks have lots of clouds and mist, making for moody atmospherics. One night Bob and I were driving through thick fog, and he said in his Viennese accent that it was “like something from Macbeth.” Another time he dropped me off at Saranac Lake’s small airport for a dawn flight to New York City. The passengers waited to board in the mist, discussing whether an orb in the sky was sun or moon. I was at my desk in a Times Square office at nine a.m. that day, feeling as if I’d passed between worlds.

Bob remarried and moved to North Carolina in the 1990s, and my visits to New York’s North Country became less frequent. Once I went to Lake George with a group that included two Vietnamese sisters, with whom relations dampened on discovery the one I particularly liked was sleeping with an engaged mutual friend. Starting in the 2000s, my northern trips tended toward Vermont, home to much of the extended family of my fiancée and then wife. Drives between New Jersey and Vermont sometimes took us through the Adirondacks, for which I’d lost no affinity.

A few years ago, friends from Sweden visited and wanted to see something beyond the New York City area. We took them to Tupper Lake, an Adirondack town along an eponymous body of water. I remembered from my youth an embroidered sign hanging on someone’s wall that said, “New York City will never amount to anything. It’s too far from Tupper Lake.” The Wild Center, which has exhibits and programs on Adirondack wildlife and nature, is a must-see when you’re in Tupper Lake.

Some months ago, we visited Lake Placid, a town with Olympic facilities and flags of the competing nations as they existed in 1980. We ascended the ski jump tower and visited the nearby John Brown homestead. I skated and took a fall on the rink where the U.S. hockey team beat the Soviets in the Miracle on Ice, a match of which I recall news rippling through my Queens junior-high schoolyard.

This year and last, we’ve come to Covewood Lodge, a well-run place on Big Moose Lake with some 18 cabins, owned by a friend of my mother-in-law. Our first visit was socially-distanced, complying with restrictions of the first COVID summer and culminating in Independence Day fireworks over the dark lake. Nearly a year later, we came back, this time a group of 13 with adults vaccinated. Limited Internet and cell connectivity is part of the charm of a place like this. Morning kayak rides with fog hanging onto the hills. An afternoon on the pontoon-based “party boat” anchored by an island where an empty house with a haunted look looms onshore; one of our friends thinks she sees someone in an upper window.