A spot where once dominant creatures of the land became trapped and were left to die. 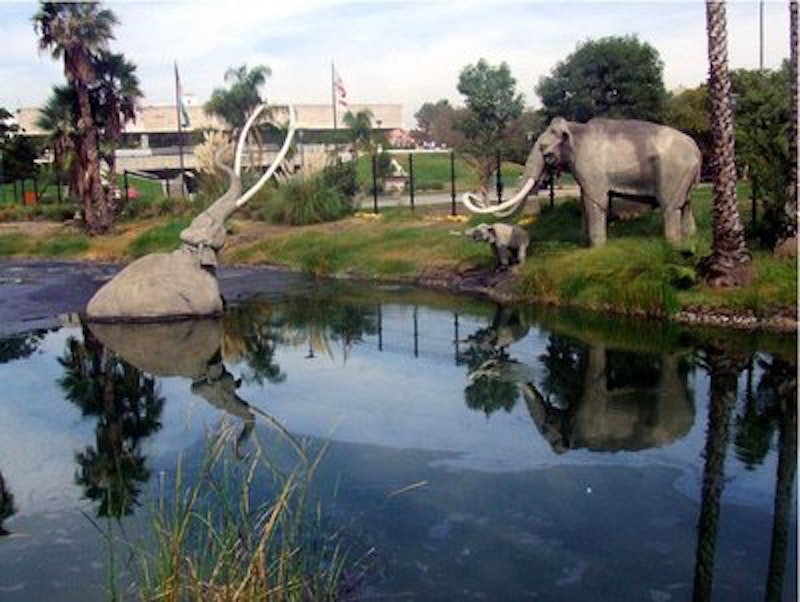 As you step outside the Los Angeles County Museum the smell hits you. It’s an acrid sulfur-like odor as if a road crew were patching potholes on nearby Wilshire Boulevard. Minutes ago you were viewing art by Picasso or Georges Braque. Now, as you walk toward the parking lot, you pass a dark, brackish bubbling lake where curators have placed three fiberglass mastodons recreating the site of ancient beasts trapped in a lake of tar.

They’re called the La Brea Tar Pits, but it’s not really tar. It’s asphalt, the lowest grade of crude oil. The ooze has been seeping up from the ground for thousands of years. As the asphalt dries, the lower density oil evaporates. What remains are blobs of icky, gooey, nasty black gook (aka “tar”).

The La Brea Tar Pits are the quirkiest tourist site in Los Angeles. They’re a perfect metaphor for the city, a spot where once dominant creatures of the land became trapped and were left to die. Tens of thousands of years ago, the tar pits were covered with water, dirt and leaves. Mammoth elephants came by searching for water. They became trapped in the tar and saber-toothed cats appeared to devour the beasts. The cats also became trapped and their bones were perfectly preserved.

In the 1800s, the Native American Chumash tribe used the tar to seal the cracks on their wooden plank canoes. Early California settlers used the solidified asphalt to cover the roofs of their houses and to fuel their campfires. In 1870, Henry Hancock of Union Oil Company acquired the area in an exploration for oil. (The area was later renamed Hancock Park.) In 1901, geologists found a fossilized ground sloth in the tar. They continued digging and discovered bones of saber-toothed cats, bison, tusked mastodons, giant millipedes, American lions and dire wolves. (Yes, Game of Thrones fans, dire wolves actually existed.)

In 1913, the Hancock family gave permission to the new LA County Museum to excavate the site for fossils. Since that time, over 100 pits have been excavated and more than 5.5 million fossils discovered. The preserved bones were dark brown from the petroleum and the oldest fossil was 50,000 years old. They were first put on public display in 1950 in the adjacent George C. Page Museum.

The tar pit lake is comprised of heavy sediment called “gilsonite” which seeps from the earth as oil. The lake is 23 feet deep and methane gas escapes from the earth causing the surface to appear to boil. For several blocks around the area, surrounding structures are exposed to methane and escaping “tar” requiring constant maintenance to keep building foundations intact. During rains, the tar pits overflow and distribute toxic runoff into storm drains flowing toward the ocean.

The city designated a 400-block area around the tar pits as a high methane zone with potential for gas explosion. In 1985, there was an actual explosion in a Ross Dress For Less a few blocks from the tar pits. Twenty-three people were injured as fire burst through sidewalk cracks and tore building walls apart. Onlookers said the Ross store looked like it was “raining fire.” The store was reduced to a heap of twisted metal and locals thought there had been an earthquake.

In 2006, while building an underground parking lot for LA County Museum, construction workers discovered 16 fossil deposits and a mammoth skeleton nicknamed “Zed.” The mammoth’s rear leg, vertebra and part of its skull were accidentally sheared off by construction equipment. The oldest known tar pit fossils are 50,000 years old. They were first put on public display in 1950 in the Page Museum. Birds, lizards and squirrels continue to get trapped and suffocate in the tar.

Many films have featured the tar pits, including Volcano, Miracle Mile, Sin City and Last Action Hero. In an episode of Laverne & Shirley, Squiggy rescues Lenny from the tar.

La Brea means “the tar” in Spanish. Thus, the La Brea Tar Pits translate to “The Tar Tar Pits.” Over the years, police have scoured the tar pits for bodies and weapons. They’ve found shoes, paint buckets, license plates and wallets. Only one human fossil has ever been discovered, the so-called La Brea Woman who died 10,000 years ago. She was estimated to be between 17-25 when she died. She was found with the remains of a domestic dog.