Hot Takes Were a Big Mistake

Lost amidst the din of people arguing about how much toxic masculinity could fit on the head of a pin were clear signs the end was near. 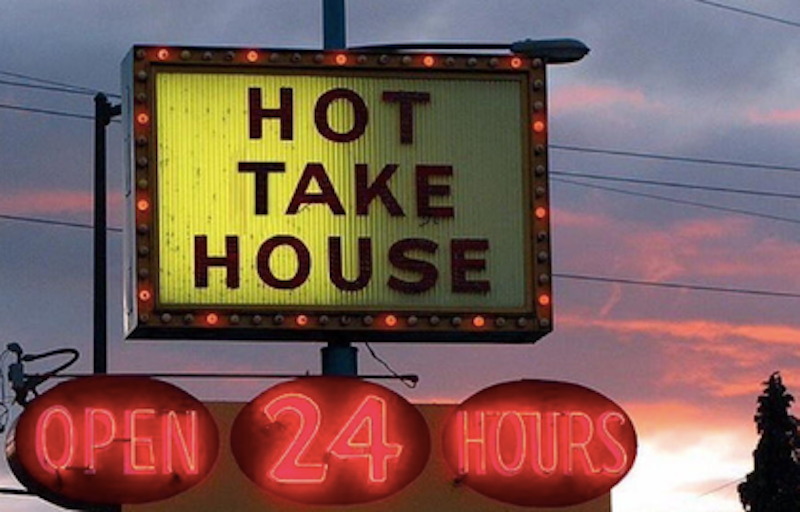 Kierkegaard warned us “The world will come to an end amid general applause from all the wits, who believe that it is a joke.” Substitute “retweets” for “general applause,” “hacks” for “wits,” and "hot take" for "joke," and there you have it. We will go on failing and dying in the face of clear danger while today’s harried hacks will find themselves hot boxing and riffing on some brainless Teen Vogue piece about Miss Piggy being a shameless manspreader. These poor hacks can’t be blamed and they can’t be helped, because they aren’t paid real money to do real reporting, but they have contributed to burying us in bullshit long before we will get down to the business of burying the latest round of bodies.

Not that we weren’t adequately warned about, say, undrinkable water or a looming pandemic. Every few months, some carefully-reported feature on such will drop courtesy of a publication like ProPublica, a feature that will be shared by journalism wonks and professors before it dies aborning on the server that hosts it. No one will actually read the story, because it’s long and tedious, and that’ll be that. The writers might win an award, which is always nice—who doesn’t like a new bookend or three for the shelves?—and there will be a few smartypants who haven’t really read it asking other smartypants if they’ve read it, in order to seem sophisticated and au courant and so forth. But none of those people will have read the serious article, because they’ll be fixated on some Pitchfork music writer’s hot take about how Father John Misty liking an alt-right, pro-Joe Rogan tweet is proof that Trump’s going to become dictator-for-life.

That’s the sort of thing, a good old-fashioned “Trump take” with a little “journalism” that involves checking Twitter likes mixed in, that supposedly moves the needle. Never mind that Trump’s narcissism—perhaps his most relatable feature, with regard to these clout-chasing Millennial media personalities who call him “Drumpf” or “resist” him while firing off tweetstorms mixed with selfies of their bare asses—is precisely why he bungled this COVID-19 response. He could’ve seized on COVID-19, or “COVFEFE-45” as the wits call it (I was the first to make that joke, by the way), and used that to deploy the troops to the borders in early February. He could’ve pushed a trillion bucks towards that big, beautiful wall of his. But he didn’t, because all he wants from his rapidly dimming life is a second term in office, a second “big win” to prove he’s just as much of a power player as Bill Clinton and Barack Obama. So he ignored a slow-evolving problem that demanded immediate solidarity because he embodies the selfish individualism that made America able to market itself as great, and now we’re weeks behind where we should be in terms of mitigating casualties, which could’ve turned a few million hypothetical deaths into something more manageable, like a few hundred thousand.

But that’s okay, because the hot take writers have kept firing away. Trump isn’t dumb, as these critics say, nor is he an incoherent babbler like “Mumbles” Biden—who isn’t merely a stutterer like myself who went through a decade of speech therapy to remove both stutter and lisp, but rather a man incapable of articulating basic information (per current “netiquette,” I’m required to divulge my own prior condition so that I can “speak from authority,” although, come to think, how can you prove I actually suffered from a stutter? Bingo!).

Trump is clever enough, a good comedic improviser and even a decent teleprompter reader at times, especially when compared to “uncanny valley” humans like Pete Buttigieg. But he can’t handle bad news or inspire civic cooperation, nor can he look outside the generic Herbert Hoover toolkit of hapless indirect government self-help (loans and certain forms of tax relief, as opposed to direct cash transfers and enormous makework jobs programs). And he’s imprecise and weak on details, though far from the “great satan” depicted in most of these absurdly partisan takes.

Why this matters, this hatred of Trump by the take writers, is because much of their spleen is personal nature. Trump’s actual worst aspects are related to his support of his party’s worst policies, but the hot takes focus on his “delivery” and “manner”—especially of Trump’s tweets, since Twitter is the easiest “news” for these extremely online folks to react to—as do takes directed at Bernie Sanders, who’s also considered to be abrasive, petty, misogynistic, and hideously ugly. This is because the hot takes, in addition to being useless piffle, are invariably personal, inward-looking, solipsistic. Sometimes an editor will dress up a particularly spicy hot take in universal language, trying to sell it as a be-all, end-all ur-take, but it’s still just a rant that, at bottom, is about bad service at brunch, or a pathetic Aziz Ansari-esque lover groping about with clammy ferret fingers in the darkness, or any one of the other enormities personally affecting the petit-bourgeois.

The takes are personal because this country, Trump’s country, is nothing if not personal. We’re a nation of individuals, contradictory as that sounds. Each of us represents “an army of one,” as that branch of the service’s risible motto once went. And we get here in many different ways. For a certain strain of leftist, the “personal is political,” a phrase that became more meaningful with the advent of Internet slacktivism and the rise of the no-budget Huffington Post blog and the low-budget Salon hot take. For many on the right, a hella-creepy “personal relationship with Jesus” was something they could boast about. But in any case, all of these special selves, these true individuals, have come to specialize in taking it personal and making it personal. One unkind tweet is now a tragedy worthy of cancellation, whereas a CEO laying off thousands of workers is merely a boring article hidden behind a Wall Street Journal paywall.

Mind you, I can see no way out of this morass. People respond to market incentives, even if the “market” in question is entirely government-owned, and so the hot take slingers are merely mice running the maze to get a taste of that sweet, $50-a-take cheddar (Teen Vogue once made me wait an entire year to publish a take they paid $150 for, bee-tee-dubs). Everyone is hustling personalized narratives for peanuts, selling pieces of themselves for less than some derelict in need of a good shower makes when strolling the interstate median to liquidate a stolen bucket of $5-per-stem roses.

There are only 50,000 or so media jobs in this country of rugged individualists, and the vast majority of those jobs pay less than my real 9-to-5 gig pays the assistant janitors. Not that the janitors shouldn’t be compensated fairly, seeing as how the work they do is mission-critical, as opposed to the work of larding some thumbsucking analysis of Miss Piggy’s manspreading problem with references to various theorists whose hyphenated surnames line the syllabi of liberal arts courses so insubstantial that famous “rocks-for-jocks” student-athlete offerings such as “underwater basket weaving” and “understanding the PGA Tour golf courses of Tampa” now seem rigorous in comparison.

At the base of it all, Trump’s failings and the failings of the hot take writers and by extension the failings of the rest of us, amount to an inability to think and act in the collective good. Saying you “view things through the lens of an organizer” might be worth a few likes on Twitter, but you don’t know what that lighter-than-air gibberish means any more than I do. You don’t have a clue. You’re in it for yourself, getting yours before you get got—the American way, then and always.

Now, strangely enough, the most selfless thing we can do is self-isolate. To hide the self away from others who might wish to bask in our IRL glory. But we can’t get our kicks that way anymore. We’ll have to start working overtime to sell our COVID-19 takes, our “dating in the age of COVID” personal essays. And we can sell them, because we must. Have you ever watched one of these super-self clout chasers fire away on the tweet feed and Instagram? It’s amazing. Their eyes have such focus. Those are the eyes of a person who could buy and sell anything, including their family dog, including their family heirlooms, including their family’s ashes, including their immortal soul. Let me tell you, I’m here for it. I sure do love to see it.

Trump, then, stands as the 1980s yuppie prototype for his extremely online haters, these latter-day “kids” who “do the work.” He’s a king self, an uber-self, a self so fully realized that he doesn’t even have to apologize and assure he’ll “do better” after he errs like some liberal congressman caught rubbing his intern’s leg hair. Trump just errs, and lies, and misspeaks as a matter of course. But even then, he’s probably not even lying or misspeaking, at least not subjectively. He’s too far gone for that. He’s not demented, the way Biden is, but he’s beyond good and evil. Everything he says feels true to him, the way everything the hot take writers choose to hot take personally feels true to their lived experience. And so this multitude of highly individualized take artists scampers under Trump’s thunder thighs and lowkey thicc ass, peeping about to find themselves a few dishonorable personal essays about how he triggers their PTSD because he reminds them of a loudmouth tennis coach or gym teacher (with the aforesaid PTSD self-diagnosed or diagnosed over tumblr in the case of most of these media essays, because those of us who were actually so diagnosed are reluctant to connect genuine traumatic episodes to Trump, as one of those “shitty media men” editors once forced me to do).

The fault, fellow kids, is not in our stars or our stans, but in ourselves.