I decided on a February walk from Fordham. 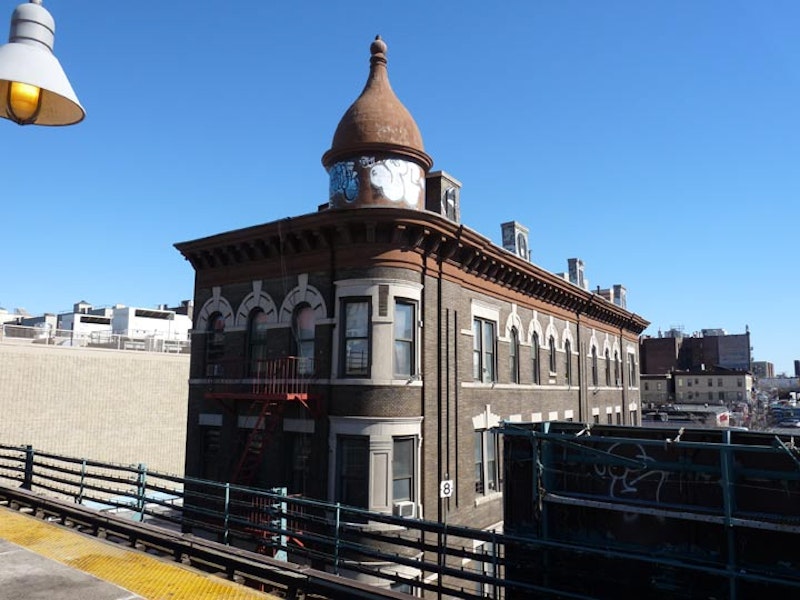 Fordham, a bustling shopping district in center-west Bronx, was named for a small settlement along the Harlem River begun in 1669 but later devastated by the Revolutionary War. Belmont takes its name from tobacco magnate Jacob Lorillard’s estate; the Lorillards owned nearly all of what would become The Bronx Zoo, the NY Botanical Garden, and the neighborhoods of Belmont, Bronx Park South and Norwood. Even the late Bronx historian John McNamara is unclear about the name’s origins, but going back to its old English derivation, “ford+ham” is a meadow or small settlement (ham) beside a waterway shallow enough to be waded, or forded, across. Might the Harlem River be shallow there, or ever were?

I decided on a February walk from Fordham, meandering east into Belmont and finally to West Farms, from where the Q44 bus back to Flushing, Queens could be obtained. It’s an odd yoking of two very different NYC neighborhoods on that bus route that uses the Whitestone Bridge. Anyway, I got a train I rarely take, the #4 local over the Woodlawn El on Jerome Ave. and getting off at Burnside Ave, named for a Civil War general with healthy side whiskers; somehow, the syllables got interposed, and side whiskers became known as “sideburns” and in England, “sideboards” as John Lennon sings in “Come Together.” It’s one of the few Jerome el stations with a center platform; this line disdains express service except when some of the tracks are being repaired.

I’ve always been a fan of the apartment house on the corner with that molded cupola, a mecca for graffiti birds. 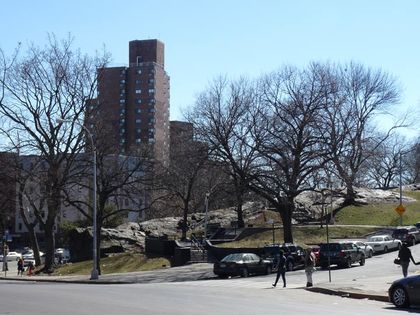 Rock encrustations dominate Julius Richman Park, as it’s officially called, at E. Burnside and Valentine Aves. With all due respect to Richman (1915-1973), chairman of the Twin Parks Association and the Urban Action Task Force, and Assistant Administrator of the City’s Finance Committee, “Julius Richman Park” simply doesn’t carry the cachet of the park’s old name, Echo Park, so named because sound waves can ricochet and bounce off these gneiss formations and return to the persons who originated them.

Had this part of The Bronx been settled at a later date (the early- to mid-1800s), it’s likely these inconvenient rock escarpments would’ve simply been blown up. Cannons could’ve been used, but that may have proved impractical. Burnside, Valentine and Tremont Aves. merely curve around the rocks and the park. 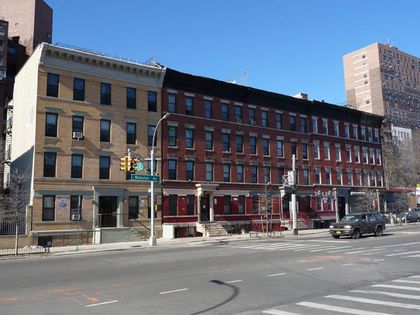 The five-story building is the end piece in a row of handsome (at least on the exterior) four-story brick apartments at E. 180th St. and Webster Ave., one of the Bronx’s main north-south drags from Morrisania north to Woodlawn. The avenue wasn’t named for the famed Congressman and orator Daniel Webster, but instead either for Albert Webster, an engineer in the Department of Public Works, or Joseph O.B. Webster, a surveyor in the same agency. Both men were active at the time the road was laid out in the 1870s. North of Gun Hill Road, it was formerly called Bronx River Rd.—which is still its name north of the Bronx city line in Yonkers. 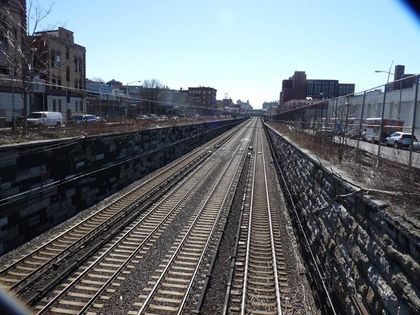 E. 180th crosses Park Ave., one of three north-south Manhattan avenues that keep their names across the Harlem River into the Bronx; the other are Third Ave., which is almost always spelled out on streets signs as opposed to the “3 AVE” seen on Manhattan signs, and Broadway, which keeps its name deep into Westchester County. Both streets owe their Bronx existences to rail: when the 3rd Ave. el was extended into the Bronx in the 1890s, the streets above which it was built were all renamed Third Avenue. (I think the spelling convention is a relatively recent phenomenon.) Likewise, when the New York Central RR, now the Metro-North, was extended into the Bronx, the streets on either side later became Park Ave. in 1896, probably to keep things consistent. Both Third and Park Aves. continue the house number series they have in Manhattan. This Park Ave. is a far cry from Manhattan’ Park Ave. of Grand Central Terminal, St. Bartholomew’s Church and the Lever Building fame. 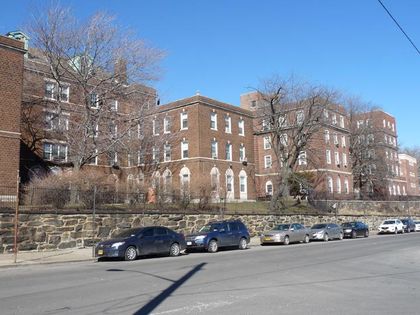 You can see the back edge of St. Barnabas Hospital (and the older buildings in the complex) at Quarry Rd. and Oaktree Pl. The land was donated by the Lorillard family, who had large Bronx holdings in the 1800s.

The hospital was founded in 1866 as The Home For Incurables by the Reverend Washington Rodman, rector of Grace Episcopal Church in West Farms (he’ remembered by the one-block Rodman Pl.). Barnabas, one of the earliest prominent converts to Christianity, accompanied St. Paul on his many journeys throughout the Mideast in the 1st Century AD, spreading the gospel. His story appears in Acts of the Apostles. 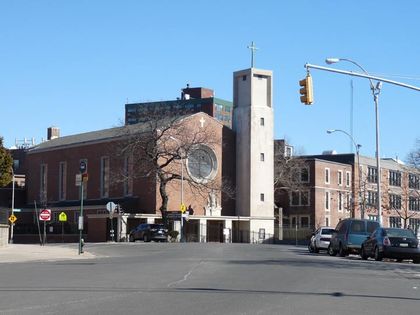 St. Martin of Tours Church can be seen at Grote St. and E. 182nd. The present church building was completed in 1952; the parish was established in 1897 and a nearby apartment building bears its name. The church was forced to close its elementary school in 2011. Schools like St. Martin’s were community bulwarks throughout the evil years of the 1960s-1980s, when the southern Bronx was a drug gang war zone.

The name of the street doesn’t honor former Mets All-Star catcher Jerry Grote, who pronounced his name to rhyme with Brody. Rather, it was named for musician and member of the Bronx Board of Trustees Frederick Grote, who rhymed his name with boat. 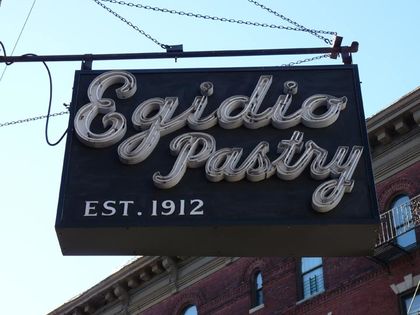 Arthur Ave. is named for President Chester Alan Arthur. Catherine Lorillard Wolfe, of the tobacco family who owned property in the area, were admirers of Arthur and also donated a statue of him that stands in Madison Square Park; Arthur took the Oath of Office on nearby Lexington Ave. after the assassination of President James Garfield. If Arthur Ave. is the spine of Belmont, E. 187th is its wingspan, with a full complement of stores, gourmet shops and neighborhood necessities, as well as neighborhood anchor Our Lady of Mount Carmel Church.

I’ve only visited a few times, but I’m reminded of Astoria in how fully concentrated the area is, serving the needs of all its residents. The Egidio Pastry Shop has been in existence since 1912. 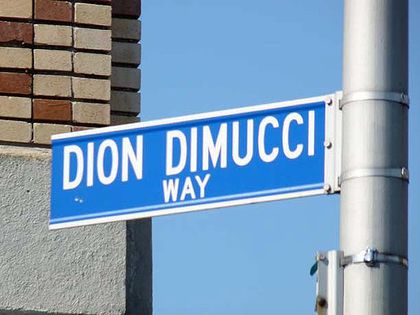 The corner of Belmont Ave. and E. 188th is named Dion DiMucci Way for one of the most popular music acts of the late-1950s and early-60s, who with his group, the Belmonts, got their start singing on street corners in their neighborhood. After signing with the Laurie record label, between 1958 and 1968 he rang up a dozen Top 20s, with and without the Belmonts, among them “Teenager In Love,” “I Wonder Why,” and “Abraham, Martin and John.” Even though the hits haven’t come of late Dion still tours and records. 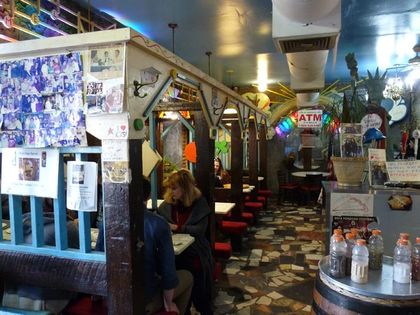 The reason for this particular walk in Fordham and Belmont was that I was heading to Pugsley Pizza, which Forgotten Fan Paul Lukas of Uni Watch fame had given a glowing review about in Facebook. I wasn’t disappointed and: the slices are both flavorful and gigantic.

Pugsley’s was founded by Sicilian immigrant Salvatore Natale in the early-1980s, a former jazz saxophone who had arrived in the States in 1967. It was originally located on Pugsley Ave. in Castle Hill (and thus has nothing to do with the striped-shirted Addams Family kid played by the late Ken Weatherwax on the TV show). In 1985, Natale purchased what had been a junkyard on E. 191st and opened the current shop there.