The Holy Bond Between Orthodoxy And Kremlin 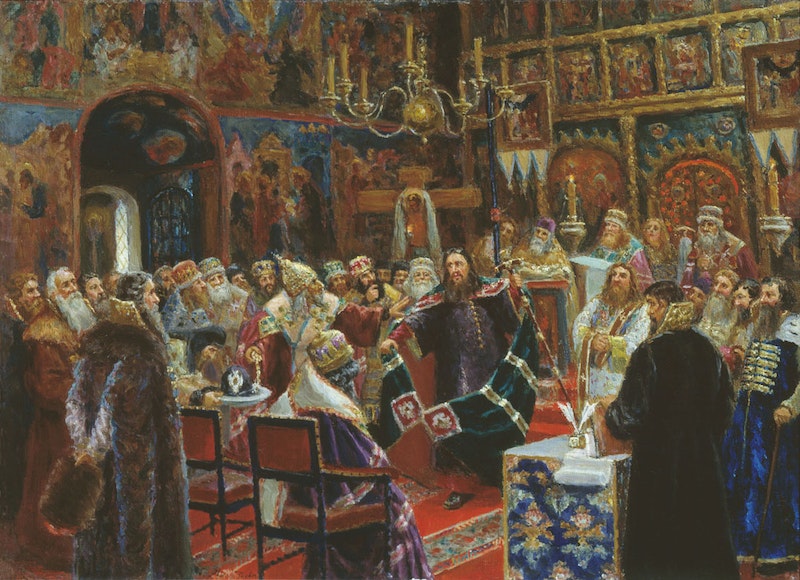 To the Russian Orthodox Church (blessed be its name), for example. A reader sends me this American Interest review of a new book about the Church’s lofty political status in today’s Russia—and in particular about its close association with the Russian Federation’s nuclear weapons program.

Some excerpts from this review by a Iulia-Sabina Joja, a Romanian-born academic associated with Georgetown and Johns Hopkins. “During communist times, Orthodox churches collaborated across their institutional hierarchies with communist intelligence services,” Joja writes, before going on as follows:

This was the case too, of course, in Mother Russia itself, where Stalin himself established the Moscow Patriarchate in 1943 after executing tens of thousands of clergymen during the Great Purge of 1936-1938. All key positions in the Moscow Patriarchate were blessed by the Communist Party and controlled by the KGB, making the Russian Orthodox clergy into first-class collaborators with the secret police.

Today, following an agenda articulated by the current leader of the Russian Orthodox Church, Patriarch Kirill, the Church defines itself as loyal to the state, regardless of political regime, in exchange for which the state grants it the right to weigh in on economic issues and other domestic and foreign affairs.

The currency that forms the basis for this church-state exchange is ideology. Traditional values are the cornerstone of what the Church promotes, which in effect emphasizes collective interests over individual rights, intolerance of religious minorities, women, and non-heterosexuals, and state intrusion into private life. Western liberal values, by and large, are anathema.

And more, if you’ll allow me:

The Church has become the strongest supporter of a foreign policy backed by nuclear threat. Today, Russia’s official nuclear strategy is first strike; Moscow now reserves the right to respond to a conventional attack with a nuclear one and is readying constitutional changes to assert the supremacy of national law over all international regulations or obligations.

In exchange for individual and collective affirmations of the role of the Church in the Russian state, the Russian Orthodox Church has rewritten history, turning Yuri Gagarin (the first human to travel to outer space) into a profound Orthodox believer and replacing criticism of Stalin’s prosecution [sic] of the Church with talk of his “sacred aura.”

Joja is writing from a position contemptuous of Russia, Russian Orthodoxy, and the Russian Idea. And yet I thank her for expressing so clearly the relationship—as glorious to me as it is contemptible to her—between the Church and Russian state power.

Some of my co-religionists take great pains denying such facts as this article is offering, on the logic that they could discredit our Church. I look at the situation in the exact opposite way: Rather than discrediting the Church, the long and close partnership between the Church and the Russian state brings credit to, indeed ennobles, the latter.

Put it in a vulgar way, if the Soviet Union was good enough for the Russian Orthodox Church, it’s good enough for Harris, a humble worshipper in the American Midwest. And it should be good enough for you, my brother or sister in Orthodoxy. Putting aside American jingoism and the Cold War propaganda we were raised with, we might train ourselves to view the USSR in the same light in which our Church apparently does—as a handmaiden to, if not an element of, the Sacred.

This speaks to the need for something else: An intellectual project to reappraise and rehabilitate the Soviet and the larger Russian past from a trad-right paleoconservative perspective.

There have been numerous left-wing attempts to rehabilitate, say, the Soviet era. These have failed for the same reason that a paleoconservative attempt is likely to succeed: Russia in whatever incarnation, even in its Soviet one, has always been and will always be a quintessentially conservative civilization, communitarian and spiritual whereas the Protestant civilizations of our degraded New World are individualist and materialistic. For paleoconservatives, there’s much to learn from the Soviet experience, and much to emulate in what was, despite its rhetoric and stated ideology, the essentially conservative Soviet system: nationalistic, socially and esthetically traditional, communally oriented, and skeptical (to say the least) of the brutality and disintegrative effects of capitalism and “rights-based liberalism.”

The idea of such an intellectual project has great appeal to me. I’ll have more to say about it in the future.