From Austin to the Hill Country. 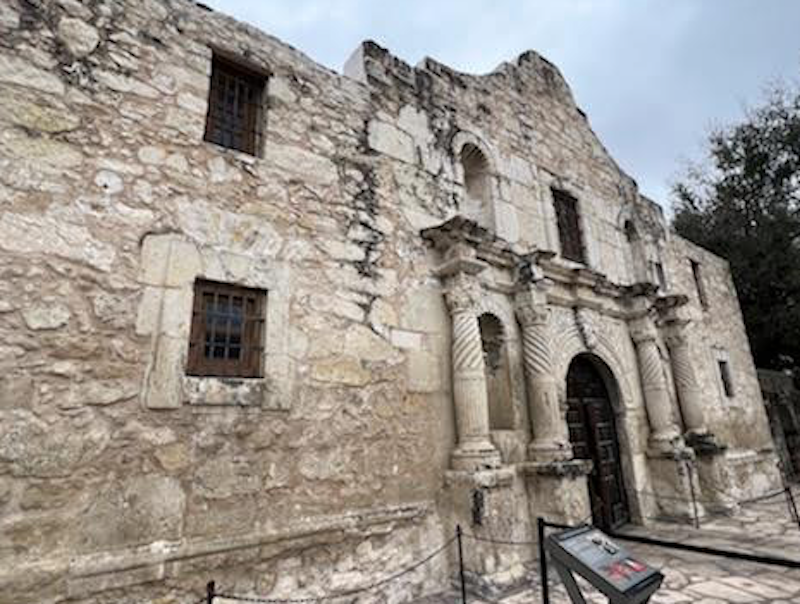 We flew to Austin to visit relatives and did some sightseeing in San Antonio, before heading into the Hill Country, where my wife was set to lecture at a lighting-design conference. The last time my son and I had tagged along on one of my wife’s business trips was to Florida just before Covid swept across the country. My only previous time in Texas was a business trip to San Antonio circa 1989.

That time, I’d stood in front of the Alamo but not gone in, instead chatting with a grizzled armed guard so old I imagined he might’ve been at the battle. Now, we took a guided tour, and while struck, as many are, by the small size of the iconic Alamo building, originally a church, one sees it’s part of a larger compound, albeit still a modest space in which the defenders were holed up. We visited during the 186th anniversary of the 13-day siege, purchasing a few books, pocketknives and a map at the gift shop.

Texas is the size of Ukraine, and “Russian warship, go fuck yourself” has become Ukraine’s “Remember the Alamo.” Revisionist Alamo history seeks to paint the defenders as provocateurs, glossing over that there were uprisings all over Mexico against the Centralists who’d scrapped the country’s constitution to restore colonial-style authoritarian rule with support from the white upper class and Catholic Church. It’s a revisionism that hasn’t much caught on, and as I write this, in a cabin in Hunt, TX, Putin too is losing his information war, despite Tucker Carlson’s brow-furrowed lathering of the shirtless autocrat.

At an Austin IHOP, an older black man was sitting alone at a table near us. He turned and said he was impressed by the discussion of current events he’d overheard from our 12-year-old son, who he said will be “the next congressman.” Then after paying his bill, the man said he hoped we didn’t mind that he’d paid for our son’s meal as well. He stood up to leave, telling our son that voting is the biggest issue we face, and upon getting to Congress, he should protect the right to vote.

We drove off to the Hill Country, about which I knew little other than that LBJ had gotten it electrified. An hour’s drive from Austin, we stopped in Pedernales State Park and took a walk on rocks along the Pedernales River, after confirming with a ranger that the flash-flooding for which the area is notorious was no concern that day. Passing ranch land that blended into wine country, we stopped in Fredericksburg, a town with a history of German settlement, and had an excellent lunch at Altdorf Biergarten, where we got to practice some German with the waitress. Developing that language skill is particularly desirable as my son and I have taken up the idea of applying for Austrian dual citizenship, for which we’re eligible based on my Jewish father’s persecution there.

In an email today, a family friend asked my wife if I have Ukrainian background, claiming that I’ve some resemblance to Volodymyr Zelenskyy, the president of Ukraine, who is Jewish. My father’s parents were born in towns that are now in Ukraine but then in the Austro-Hungarian Empire, though Polish rather than Ukrainian would’ve been their local language.

A 90-minute drive from Pedernales brought us to Camp Waldemar, in Hunt. It’s a girl’s camp in the summer and now was hosting the annual meeting of the International Landscape Lighting Institute. There were a few Trump signs in the Hill Country, though fewer than recently seen in southwestern Pennsylvania. Somewhere, probably in Johnson City, we saw a rundown truck with “Trump: Promises Kept” painted on the side. I don’t know if Texas is turning blue anytime soon, but that decrepit truck, in its unintentional irony, struck me as an ominous sign for the GOP.