Shakespeare’s got nothing on that “evil men do” crap. 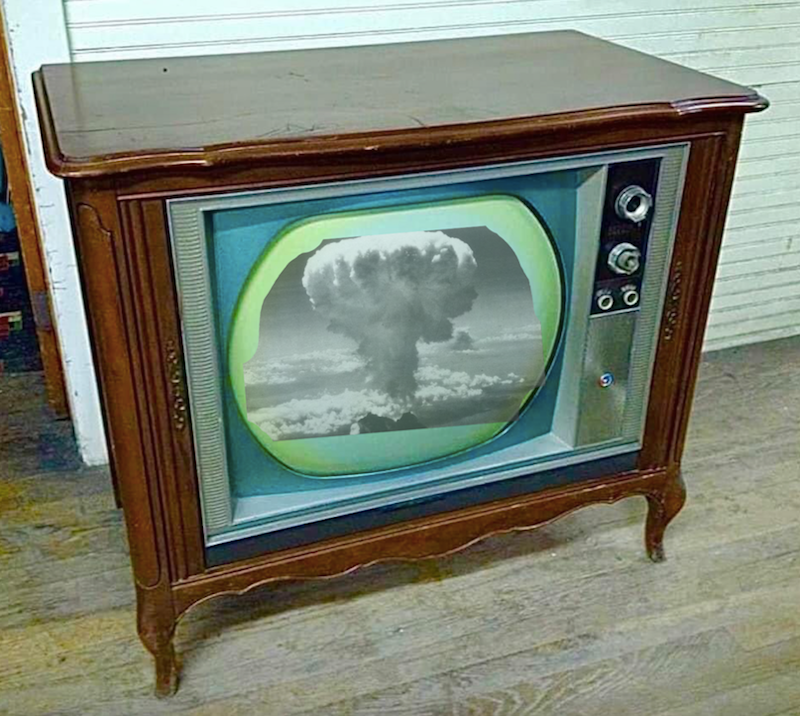 Nietzsche said a lot of wacky fluff like, “What doesn’t kill you, makes you stronger.” Maybe so, lately what doesn’t kill you, makes you wish it did. Life’s a constant struggle, it always was, so “they” say it’s good for building character. Whoever the fuck they are. Shady characters. The same ones who tell you, all is well. The road to hell is backed up for miles. Adversity gives strength to face future problems. Turmoil and catastrophe are commonplace. The kind of timely event Root Boy Slim sings about in an old ditty, “WW3”; “Lookin’ for a place to plug in my TV, when I finally realized it was World War Three.”

Shakespeare’s got nothing on that “evil men do” crap. Hence, The Evil That Men Do Lives After Them; The Good is Oft Interred with their Bones."All the world’s a simulation on a stage and we’re a blip acting on the screen. Hells bells, dance that mess around, would ya? Like a chintzy mash-up of Dr.Strangeloveand The Russians Are Coming. Barry McGuire’s “Eve of Destruction,” and the Ramones, “Rocket to Russia,” with love, and a little bit of Louis Armstrong’s “What a Wonderful World.” So trot out your dead, and let the skeletons outta the closet. It’s time to commence. Do away with the formalities. We’ve been watching the world blow up since the original Big Bang, baby. Old hat, lame tricks, sorry illusions. If you’re of a certain vintage you’ll remember staring at up into sunny blue skies looking for nuclear bombs falling. God bless our fallout shelter.

Maxims, quotes, anecdotes, quaint sayings, words to live by in the age of golden rule, as in, do unto others before they screw you. It’s nothing new. People have been fucking each other over since somebody threw the first rock in anger, or pissed in the communal stewpot. Reality’s a cheesy TV show anyway. Oligarchs wearing foil hats stomp around the globe like angry dinosaurs. Some give donning red caps a bad name. I’ll never look at a red hat the same way ever again. Ex-KGB macho men and a lousy golfer who cheats death out of life. These are the cowardly lions chosen to lord over the rabble. The best we can do, and that’s all we got at the last supper, nobody gets a second helping.

In the world’s carousel of color, everybody’s going to Disneyland. That’s the general consensus of dolts who draw lines in the sand. No man is an island, some guy said. He’s a peninsula. Connected to the rest of what’s left. The exclusive realm of ninnies and knuckleheads. There’s no great reset, no divine plan, never was any grand scheme to fix the problem of a leaky broken world toilet. Get the bugs out. Update your running system. Die with your reboots on. The switch is broke, button’s stuck on, fire, deploy. All systems are go. Grab the plunger.

Living by hackneyed words from an empty encyclopedia of knowledge unlearned. It must be so, the news says it is. So what, why not? Who will you believe? That’s good enough. Some sawdust talking head telling it like it ain’t or the proof in the pudding? Passion plays of the power-hungry devour hearts and minds in a continuous flow of raw sewage leaving the soul to shrivel on the vine. The old regime is taking over. In a new, improved way. No stopping the angry hordes. Crossing imaginary borders, searching for sanctuary. The people wait in line along fences to the slaughterhouse gates. No matter what side of the fence you’re on. They’re so tired of it all and just plain old bored. Not another war, or friendly incursion. We’ve come with bloodied hands to keep the peace before the next explosion goes off. The killing floor is slick with the blood of the lamb. Jesus cooks good BBQ, the kind that burns your mouth. Sticky fingers fondle a crucifix way down in the Dirty South. The peacekeepers are here. “Times are bad, children no longer obey their parents, and everybody’s writing a book.” Cicero in 43 BC. He never said it. But it’s true. Maybe he did say it. Socrates never examined his life, he believed it’s not worth living.

Intelligence is artificial. Come on over to my simulation and hang out. It’s fake, but better than the real one. In my world, this sort of stuff never happens. In my day we blew stuff up proper, not this scatter-brained bomb blown up real good kinda fluff. Quote of the day. “Never put off today what you won’t do tomorrow.” Ten quotes from a famous celebrity. Take your pick. They’re all the same. The level of stupidity never ceases to amaze me, and I’m not that smart. And The New York Times says, blah blah blah. This life will be the death of me. Go on, tell the people what you told me. Tell them. Fess up. Action News knows the scoops. Up to the minute, filling in updates. Here’s another quip. No news is good news. Dying in a war never stopped any.