All is vanity in the looking glass. 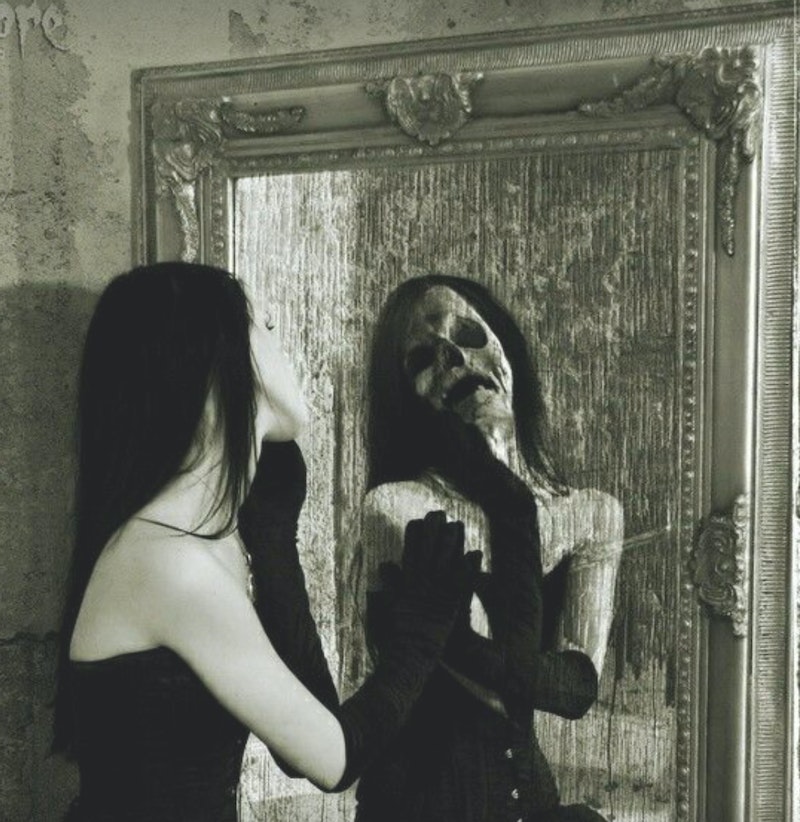 A short scene in the film Barfly portrays the poet Charles Bukowski as his alter ego, Henry Chinaski. He’s beaten about his drunken head with a heavy purse by the female protagonist Wanda Wilcox, the on-again, off-again gal pal, and drinking partner. She attacks Henry while making a hasty retreat from the apartment after a heated argument. Chinaski falls down, passed out on the floor. After regaining consciousness, he stumbles to the bathroom. He peers in the mirror to examine his head wounds. His sweat-soaked, booze-stained t-shirt is covered in dry caked blood and his face, a twisted bloody soused grimace. He guzzles greedily from his bottle of whiskey, and then pours some of it over his head.

Glaring back at his disheveled appearance in the medicine cabinet mirror, he delivers a meandering poetic soliloquy of, “nothing but dripping sink/empty bottle/euphoria/ha!/youth fenced in/stabbed/unshaven/ha!/taut words propped up to die.” The babble of a madman, and a poet. Delusional thinking by imbibing alcohol is one way of seeing things that aren’t really there. Or are they? This quandary has puzzled great thinkers and drinkers for centuries.

Confronting demons square in the face via your berserk reflection through a mirror darkly is another course of action. A divine madness, that befuddlement of illogical invisible forces visualized in basic truths. When facing your self-image, who are you? What others perceive, or merely think what you seem to be? There are as many questions as monsters, you may believe, only to be the sole recipient of you, your physical self, and the doubt of others.

The Trexlor Effect or Trexlor Fading, is the terminology of optical illusions that affect visual perceptions. If you fixate on a particular point at any object in your field of vision for a short period of time, an unchanging stimulation away from the fixation point will fade away and seem to disappear from sight. In fact, you start hallucinating. Like the after image of a flashbulb burns the picture into your retina, you see the original in your field of vision, even with closed eyes, seeing traces of it in every direction you look. A ghost image.

Halloween-related folklore relates spooky games like “Bloody Mary,” where someone looks into a mirror repeating the name, “Bloody Mary” 13 times to conjure up an evil spirit, and a ghostly woman drenched in blood will appear. These nighttime parlor games were a popular diversion at sleepover parties dating back to the 19th century. Other myths travel back further with roots in mysticism and biblical lore. The three wise men. The three degrees of the Freemasons, the Three Kings Feast of the Epiphany, and many groups of threes holding countless legends of yore. A tryptic triangle of threes.

The Three Kings Ritual involves intricate instructions with three chairs, three candles, inside a windowless room, designated times like 3:33 am, kings, crones, queens, a fool, or jester, and the mandatory mirror. Many of these events delve in occultism producing mysterious nightmarish stories about staring into mirrors for extended periods of time. A lab experiment in 2010 asked 50 volunteers to stare into mirrors surrounded by dim lighting in a test control room for 10 minutes. The majority saw themselves as monsters.

The first evidence of mirrors as grooming tools dates to the 5th-century BC, in depictions of elegant Greeks peering at hand mirrors. The ancient Roman’s choice was polished metal. Today’s layered silver-plate glass mirrors were perfected in Germany in the early-1800s. No home, bathroom, bedroom, or beauty parlor could do without them and the superstitions that followed. They hold a field of energy, both positive and negative.

The seven-year jinx of bad luck caused by breaking a mirror could be reversed by grinding all the shards to dust and casting them to the winds. The practice of turning a mirror against a wall, or flat on the floor, would keep a recently deceased soul from being sucked into the mirror, to become trapped for all eternity. This was the preferred method during Irish wakes, but other cultures simply cover their mirrors draping a cloak or blanket to block any light or keep a spirit from entering into the glass. And never look at the deceased in a mirror image. It would prove fatal. Excluding vampires, who are invisible reflected in a mirror.

But if you peep and gawk long enough you’ll see something, possibly hideous in the glare. A trick of the eye portrays the illusion of perfection in human form. All is vanity in the looking glass. The animal kingdom is not immune to seeing something else other than their likeness. I’ve witnessed dogs and cats freak out looking at a mirror. I had a canary that pecked and attacked the little mirror, agitated in its birdcage. Cardinals and blue jays will attack and dry hump parked cars side view mirrors. Leaving behind a mess of bird droppings on the car. Other birds have met their demise flying into glass window’s, mistakenly thinking it’s a friend flying by. When I was young, I didn’t bother with how I looked. Now, I avoid mirrors. When I do take a peek I don’t recognize the visage of who it is. I glance at an old, ugly man. Not monstrous but creeped-out enough. I turn away. Who is that weirdo stranger? It scares the hell out of me, whoever that freakish likeness is. Every wrinkle a testament to the passage of time, and the proof of what still remains.