Seeking Harmony in the 2020s

Observing architecture and nature in a divided country. 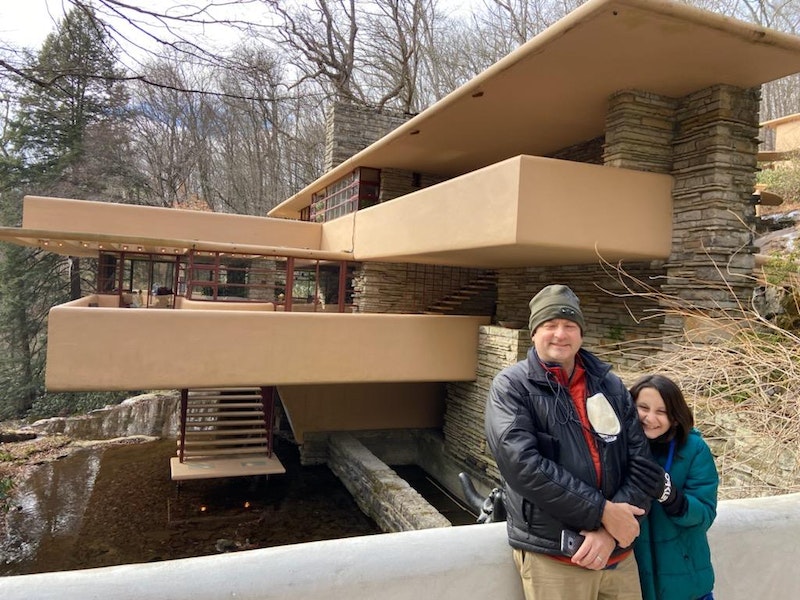 Frank Lloyd Wright used the term “Usonian” in reference to the United States, on the grounds that “American” encompassed other countries of the Americas. I learned this over the holidays, passing through Pennsylvania on a family trip to Ohio. We visited the architect’s iconic Fallingwater, after staying overnight in Balter House, designed by his protégé Peter Berndtson, the latter in nearby Polymath Park, a compound with four houses built or inspired by Wright.

“Usonian” also means “in unison,” reflecting aspirations for social and environmental harmony. The term became attached to houses such as those at Polymath Park, designed for the middle class with an eye toward simplicity and economy. The Balter House, built in the 1960s, had what looked to be its original oven, with push buttons located behind the burners, apparently not working but fitting in seamlessly with the overall esthetic.

We picked up pizza at a local restaurant, where the masks my son and I wore marked us as outsiders to the area. “Hippies: use side door,” directed a sign by the bar. This part of southwestern Pennsylvania featured Trump signage, including assertions that “Trump won,” which I find more offensive as a fact-checker than as a Democrat. There also was significant evidence of Steeler fans. Later, in Cleveland, a friend who’s a Pennsylvania-born scientist and diehard Steelers fan insisted that pro-Trump and pro-Steeler sentiments are uncorrelated, and indeed I’d observed few if any properties holding both types of banners.

Wright was ahead of his time in his emphasis on sustainability and conservation. “Solarpunk,” a current tendency in sci-fi art and literature that imagines landscapes merging technology with nature, is considered to reflect Wright’s influence. I first became aware of the solarpunk movement through its advocacy on Twitter by commentator Noah K. Smith, and I like the basic concept; though having seen Fallingwater and Polymath Park, I agree with my wife, who’s an architectural and landscape lighting designer, that Wright’s oeuvre is “better than solarpunk.”

Driving in eastern Ohio, we passed the giant Lordstown Complex, onetime GM plant now owned by start-up Lordstown Motors, which intends to build electric trucks there. For some time, I’ve been fascinated by the potential of electric trucks to advance sociopolitical alignments. If this venture brings jobs and prosperity to this part of Ohio, a further consequence will be to broaden support for clean-energy technology, giving working-class and heartland cachet to environmental priorities long associated with affluent progressives.

I’m an optimist. I see hidden positive possibilities even in bleak situations. There’s no pretending that the politically-troubled and disease-ridden start of the 2020s have made for an upbeat time. Yet taking an interest in a wide range of subjects can help one look past some grim developments. Wright had a formidable curiosity, drawing inspiration from cultures around the world and throughout history, with a particular emphasis on Japan but also including ancient Mesopotamia, the Byzantine Empire, and much more.

While in Ohio, I read the news that biologist E.O. Wilson had died. This was another figure notable for his wide range of interests and for a focus on humanity’s relationship with nature. I’d reviewed Wilson’s book Consilience for Reason long ago, and wasn’t a fan of all his ideas, which included an emphasis on genetic determinism. Still, I was appalled by a notably unfair and unsubstantiated critique of Wilson’s legacy in Scientific American. America, or Usonia, remains divided, though perhaps some of the excesses of left and right will cause sufficient backlash that they prove self-defeating.