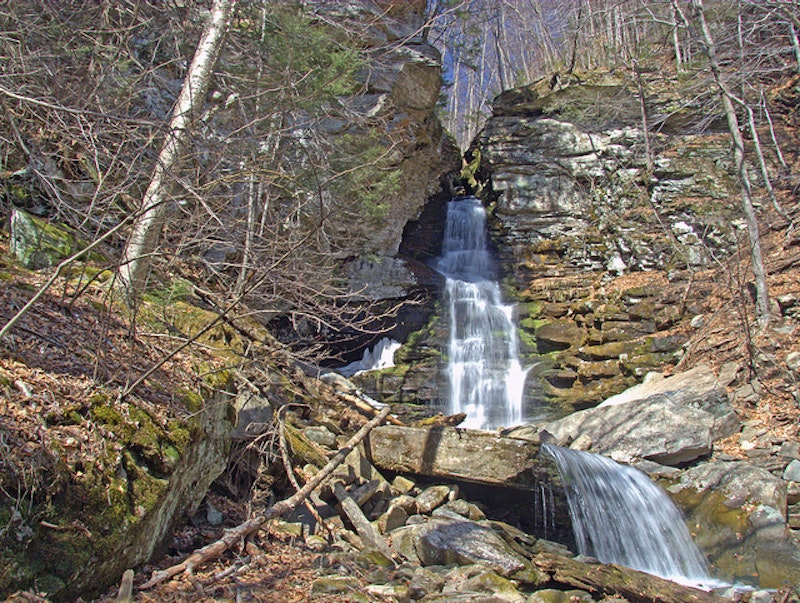 It’s rare for a taxi driver in the mid-Hudson valley to be stopped in his or her tracks. Most of the time the cab gig is a fast-paced, cutthroat business riddled with gas mileage angst, swelling odometers and the floormat dramas of weekenders trying to catch Amtrak trains and juggle a career, family and, oh yes, two residences. Other times the car is filled with scowling Rhinebeck matrons dutifully reporting to mid-week beauty shop and medical appointments. And then there’s the army of nocturnal gorgons who emerge from various bars, lodges and roadside shanties stripped of their driver’s licenses long ago by Johnny Law and his nose for booze. They need to get home.

But when the car pulls up beside a place called Buttermilk Falls on a remote Ulster County roadway, all of these human frailties dissolve into thin air. There was no signpost up ahead, as Binghamton’s Rod Serling might say. Only a falling water epiphany.

It was an early summer Friday and I was taking a hiker from the understated sleaze of the Kingston Trailways bus terminal out to a trailhead he said was near West Shokan. He had plenty of professional “gear” including a hiker’s GPS that only showed trails, but he said it was “old” and probably out of date. No matter, it was a $55 ride into the wilds below the Ashokan Reservoir with the Catskills towering above, and sometimes below.

He was a Manhattanite going at it alone. Odd time to start a big hike, I thought, especially solo. But my Ranger Rick subscription expired long ago so what do I know? Onward with the steering wheel and accelerator business. As Route 42, also known as Peekamoose Rd., dwindled to a goat path just south of the ever-winding route 28A, the miles became sandbags piled onto the groaning Chevy Lumina. The sun was starting to play peek-a-boo with the many hollows flanking our windshield panorama, dappling it with harsh and official Catskill Forest Preserve shadows.

The man in the back seat looked like Gary Shapiro, an obscure gossip columnist I once worked with at the now-defunct New York Sun newspaper in the city, only this guy was less nervous and less Ivy League. He had a strange, wavering confidence. One minute I believed his assurances that the trailhead was only around the next bend, and the next minute I was conjuring Donner Party scenarios and broken down Luminas and Blair Witch sequels.

Finally, as a certain lichenous haze began to settle in the depths of the valley, he said matter of factly: "We're coming up on Buttermilk Falls. I can hear it." I turned down the volume of the staticky Woodstock radio station and lowered the windows and let a steady “hiss” into the cab. Sure enough, about 100 feet ahead on the right, white water was cascading and falling down a rocky ridge and into a creek pool below. It was set back 15 yards or so from the “shoulder” of Peekamoose Rd. There were angular rock formations pointing toward it. It was Buttermilk Falls.

There was no Niagara magnificence or Kaaterskill goosebumps. Something about Buttermilk Falls was comforting and just right on a human scale. These falls were tiered, almost like a ballpark, framed nicely by mossy cliffs displaying a few thousand shades of green. The trail head was another 50 feet past the hissing waters. He took his gear out of the trunk—a well-organized backpack he had to climb into. He put down his steam-powered belt-driven GPS and gave me $70 and scrambled up a steep slope, grinning as he said goodbye. It was a startling exit as he seemed to vanish immediately into the underbrush. I got back in the Lumina, turned it around on Peekamoose Rd. I stopped—in my tracks—in my half of the road alongside Buttermilk Falls. Hadn’t seen another car since we turned off 28A a quarter of an hour ago. It was absolutely still except for the rush of water—acoustic perfection in a windless environment. I used the armrest to rest my arm, and with the driver’s side window down, I contemplated getting out of the cab but then decided to remain seated in this particular church. A solitary black sedan with livery plates on Peekamoose Rd., sheet metal reflecting a reluctant June dusk with several taxi runs booked for the evening.

But for a few dozen moments, nothing could pierce the armor of the enchanted splendor holding my gaze. I felt like I should burn a stalk of sage or something.

Instead I downloaded spiritual messages from a number of entities and filed Buttermilk Falls away as an ultimate respite and place where indecision, indifference, mobile commerce and transportation culture all fall at the feet (and under the sword) of natural beauty. There is no rat race or corporate ladder or meetings with human resources on Peekamoose Road. Maybe that was the spring in this mysterious hiker’s step once he strapped on his pack and had paid his fare. Someday I will return to the falls with somebody important and something important to say. That way, no one will hear it and it will not matter as the water keeps falling and falling.

—Spike Vrusho, the son-in-law of British historian Paul Johnson, is the author of Benchclearing: Baseball’s Greatest Fights and Riots, published by Lyons Press in 2008.