Reimagining Dragons For a New Era of Fantasy 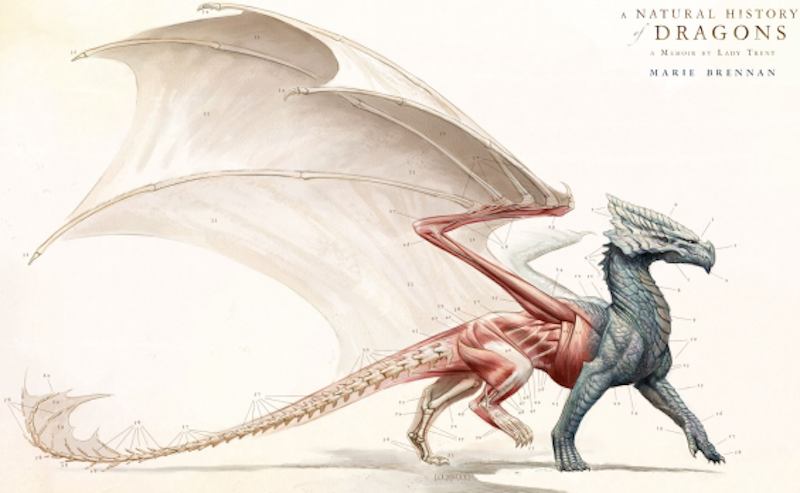 As mythological beasts go, it's tough to beat dragons. Though we tend to think of them as European inventions, cultures around the world from the ancient Greeks and Jews to the indigenous peoples of Vietnam have legends about reptiles with deadly breath and rows of dagger-like teeth, occasionally flying through the air and being generally greedy. The question is, after untold centuries of draconic tales, how will today's fantasy writers create compelling stories about these iconic monsters that pay homage to their history without recycling tired old tropes?

You might have guessed that the secret is to draw new life from different genres and disciplines. Marie Brennan—author of the Onyx Court series and many short stories—certainly did, and put that insight to work in her latest book, A Natural History of Dragons, which was published by Tor back in February. As a rule, Tor's catalogues of late have been spotty at best; given that they've been able to count on Robert Jordan's Wheel of Time series to bring in revenue for more than two decades, it's no surprise that their business model should tend toward pumping out Orson Scott Card novels and Halo tie-ins—comparatively pedestrian fantasy and sci-fi is a safe bet, and pushing it in today's publishing climate is riskier than ever. Unfortunately, this strategy doesn't do much to elevate fantasy beyond its current predicament: many literary types still consider genre fiction in general to be less valuable than literary fiction, and some have turned away from fantasy entirely, thanks to the recently fashionable paranormal romances that glut the market.

Brennan, however, puts a whole new spin on the world of dragons, using plot devices that seem familiar but are twisted in a surprising way. A Natural History of Dragons takes place in a land much like 19th-century England, but with some major changes—the various sects of Judaism appear to be the world's dominant religions, a culture much like that of Egypt existed in Europe hundreds of years prior to the beginning of our story, and of course there are dragons (some as small as insects, some as large as you would normally expect a dragon to be). Isabella, our nobly-born, spunky heroine, is no mere self-insert or two-dimensional princess; she's a pragmatic young lady who has realized at a young age that anthropology is her true passion, specifically as it pertains to the study of dragons. (Too bad for her that this is still a Regency-era tale, and ladies can't do as they wish—something Isabella learns after a traumatic wolf-drake encounter, as that particular species of dragon has a fondness for female prey.) There is no quest for treasure, though some rather important gems do appear in later chapters; instead, if you'll forgive the Kingdom of the Crystal Skull reference, our heroes' treasure is knowledge.

Tucked in with the decidedly unique fantasy elements, however, is a rather traditional romance, handled with grace and nuance. Isabella finds herself forced onto the path of marriage and soon ties a very logical knot with Jacob, a young lord whose academic tastes meld well with Isabella's own. Their life together involves not just heart-warming love, but several tragedies, all of which are handled with care and true emotion, never lapsing into fantasy melodrama. There is a mystery to be solved, science to be done, maps and anatomical diagrams to be sketched, and Brennan expertly weaves a great many disparate threads into a character-driven plot that is as compelling as it is just plain fun. Isabella tells us her story in the form of a antiquarian memoir, written as an 80-year-old woman; rather than diminishing the suspense, this merely brings back the feeling of reading a classic serial, in which one knows the hero will survive—the entertainment is in seeing how, not if, they'll get out of each predicament. Todd Lockwood's exquisite artwork heightens the experience dramatically, with a series of portraits, landscapes, and gorgeously detailed dragons.

Fantasy, as a genre, is perpetually having an identity crisis, with writers and fans alike wondering where they can collectively go next. With writers like Brennan at the wheel, we can all be assured that the boundless imagination that drew us to stories of the fantastic in the first place is still alive. Genre fans of all sorts will adore A Natural History of Dragons; I did, and upon realizing that Brennan has two more books planned, I’ve found myself in the familiar position of waiting impatiently for the next one. It feels good.