“Though the universe wheel its smoke about our eyes.” 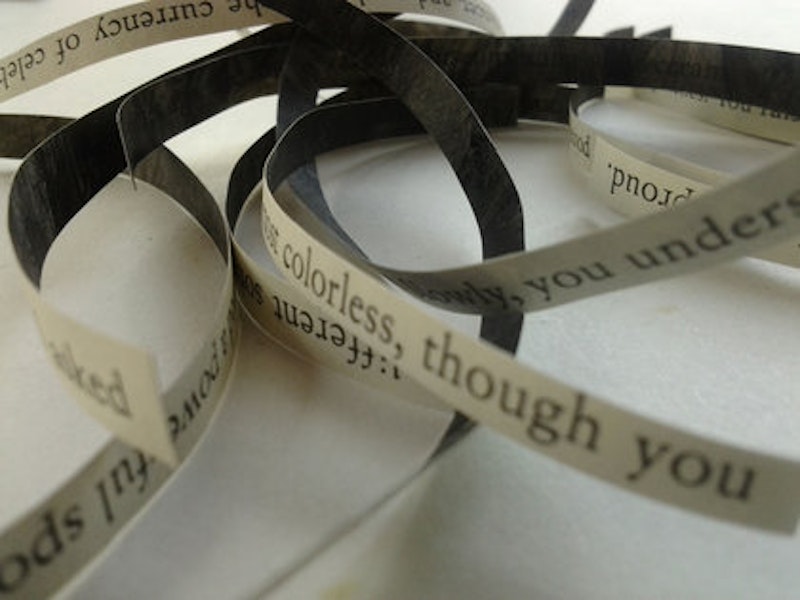 “Where is my Bonnie Tristan”—sings the maiden of Breguice's verse—“where is my darling dear, my robin far and near, my gold-shanked domino? Oh, lute a-sparrow, oh plangent marrow, oh tree bent by roe. Where is my golden eye, my lover's tender pie, the sullen stone so lonely as it settles far below? Oh my Bonnie Tristan, oh my domino.”

So sang the ancestral voices of a realm far removed from today's salt-girded, seal-reinforced modern reality. To seal is to bark, in a sense, but it is also to press. A letter unsealed is a letter perhaps unwisely condemned to sport an inveigling flap. Wing Pinero begged the credulity of an earlier generation when he insisted that to borrow once is not, equally, to transfer twice. We can better that skepticism.

But doing so leaves us far from answers. The long-tressed lamenter of departed Tristan: what stance would she, could she, take on a question so hemmed about? Pinero indeed! Place, time, the buzz of heavy golden bees bumping the air above a hummock of green, the unquestioned intersection of assumptions that hold no force unless examined—these demand counsel, and indeed they stand as a gallery of reproachful mutes to the modish disdain for integument that has subtly diverted recent thought.

I have no brief against the young lady. She sings, the hill throbs, the sky lowers, its blue so pure that it weighs on the ground. Her chin falls up, her eyes close and a new gout of song overwhelms her. To wish her joy is to wish redundancy; to wish a seizure is to seek revenge. To dwell is not to meditate; let us recognize that ground rule. Here is our staked spot of certainty, “though the universe wheel its smoke about our eyes.”

Most of all let us remember. “Harrow heath and morning fall, whiskey stone and scatter, is that my breath for which you call, and Gertie, what's the matter?” The harsh laugh of the younger Greene, always quotidian, closes off reverie. Breguice and his lyrical maiden affronted chance as it was commonly understood. Greene, father and son, remind us of other forces at work. Vicars knew these forces well, and so did chemists. So did all placed beneath this sky of another century. Lute a-sparrow, yes, and no one doubted the weight deposited by shad reproduction—on a tree, on an orchard.

When a Breguice sighs, when a Clamsdell repents, when a Greene, older or younger, calls dramatically for silence, we are implicated in one sense, left out in another. Perhaps it must be so. The verses of this period can enchant, but they also puzzle. They call from across vales “where feet bend no stalk, and sultry silence reproaches.” The younger Greene perhaps understood better the consequences of distance; hence the vigor with which he hails Gertie, the abandon with which he scatters stone and whiskey—for who is there to witness? Not the maiden. Perhaps not us. Perhaps Tristan only, and he all alone.