A Lucky Day at the Track and Things Are Looking Up

Looking for a winner. 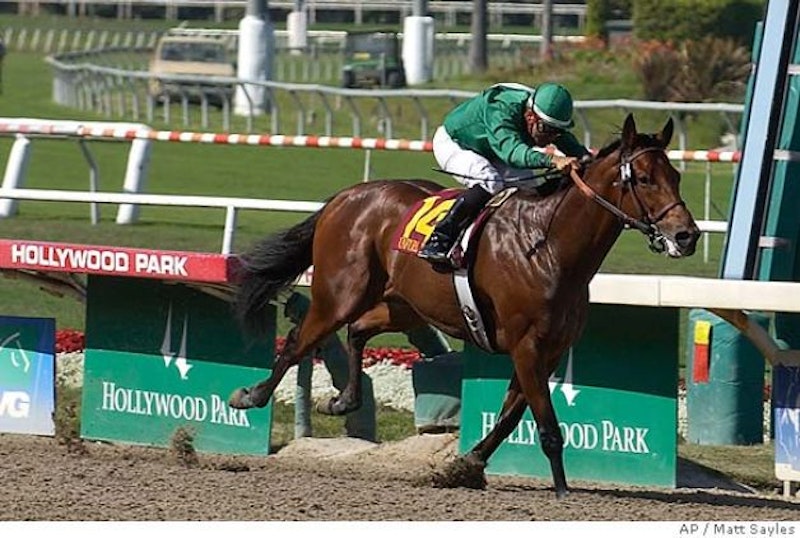 Steve called and asked, “What are you doing?”

“Wanna go to the track?”

I didn't know the first thing about horses, but I had 50 bucks in my wallet and had a white short-sleeved shirt with a pattern of little red and black horses. I put it on, grabbed a hat and sat on a chair on my porch to wait for my ride.

I remembered the very first brush with the ponies, some 20 years earlier while I was in a sports room at a Vegas casino. I overheard a couple of guys talking and one said to the other, “Willie Shoemaker's got a mount in the next race. And you know what they say, when the rent is due, bet on the shoe.”

So I did. I bet 10 bucks to win. I remember that the person at the window was very helpful in determining which horse Shoemaker rode, but I couldn't tell you where the race was run, the odds, the distance or anything about it. There were big screens on every wall of the room and plenty of comfy chairs to sit in and watch basketball and baseball games and a few racetracks. I lost. And decided that horse racing wasn't my thing. I had my hands full betting other sports anyway.

But 7/7/07, was a whole new day. They were handing out black caps embroidered with gold lettering that read “Hollywood Park is Fantastic.”

I bought a tip sheet and a Daily Racing Form and between what I read in them and what was in the complimentary program I made my picks. I won my first race and a little something every race I played. Not much, but I was hooked and walked away with more in my pocket at the end of the day. My friend wasn't so lucky. I told him, “I'm a horse listener. They tell me when they’re gonna win and I do what they say. They told me what window to go to and when to put a couple bucks down and box three horses in an exacta."

He told me to kiss his ass.

Today I'm looking over the Daily Racing Form in preparation for the big race, the 139th running of the Kentucky Derby. The radio is on and a reporter is doing a story on rabies. The symptoms first appear one to three months after infection with the virus. Early symptoms are often similar to those seen with the flu and may include fever, headache, and general tiredness. In addition, the infected person may experience discomfort, numbness, or pain at the site of the bite. Progressive symptoms of rabies can include insomnia, slight or partial paralysis, hallucinations, and hydrophobia and eventually encephalitis and death. Treatment is possible and would consist of daily injections over a 28-day period.

Lately, there’ve been multiple reports of infected bats in New Jersey and a search is on for some kids that were seen playing under a pier that may have been bitten. Poor guys. I change the station to another playing classical music; it's nice. Mozart, I think.

I need some luck. Sales at my day job have been damned slow lately. I go to my desk and look in a drawer for a highlighter and instead find my astrology chart so I put that aside and I find an envelope with a $ sign on it and look inside to find 40 bucks that I’d forgotten about. And then I find a movie pass to the Egyptian Theatre. Then, when I look again in the drawer, there was yet another movie pass and a voucher for a small drink.

I’m telling you things are looking up! There was a minute way back when that the horses spoke to me, but my luck hasn't held out. Maybe it changes today.