The Genius of Grandparents

Why I don’t mind when people chatter in movie theaters. 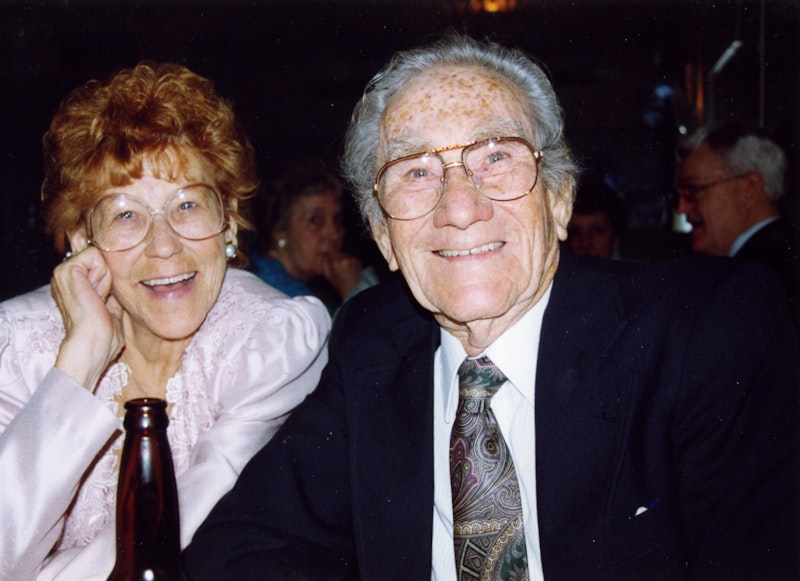 About a month ago, my wife, son and I were at a matinee showing of the Halle Berry vehicle The Call—with zero expectations, the film turned out to be pretty good—and the audience was really noisy. Towards the end, in a suspenseful sequence, a fellow a few rows back yelled out, several times, “Halle, call 911!” That cracked me up, although our son was vexed, as he follows movie etiquette to the letter, and glares at me if I make even a low-decibel comment when the lights are turned off. Could be that many years of attending movies at Baltimore’s once grand Boulevard Theater on Greenmount Ave.—long closed, it’s now a junk shop—inured me to boisterous crowds, but I think what really settled the issue was a lovely afternoon back in 1990 when my wife Melissa’s maternal grandparents were visiting us in Manhattan from their home in California.

Buzz and Mabu (the grandkids’ nickname for her) were an idiosyncratic pair of senior citizens, funny, sometimes ribald, and never willing to let anyone get the better of them. Melissa doted on them, and it was reciprocal, and witnessing their relationship was a treat, especially since my own grandparents, save one cranky and rather mean-spirited grandfather, were long deceased by the time I—the youngest of five boys—arrived on the scene. (My mom’s dad was born outside of Dublin in 1868, a family timeline that still amazes me.) Anyway, Buzz and Mabu weren’t keen on New York City, but did want to see Melissa and, probably incidentally, wanted to meet the guy she was seeing.

I suppose we did a bit of sight-seeing, can’t really remember, but a few things stick out from that visit. We went to see Memphis Belle, a modestly engaging World War II film with an ensemble cast that featured Eric Stoltz, back when he was popular, the always excellent Matthew Modine and Sean Astin. Throughout the movie, Buzz and Mabu kept up a patter—their hearing at 80 or so not what it once was—which really ticked off the people around us at the Union Square theater. At first, when Mabu nattered and nattered—“Buzzy, I remember planes like that, don’t you?"—and Buzz would answer back, it was mildly uncomfortable, sort of like when your toddlers are making a fuss on an airplane, but since there was no turning back Melissa and I rolled along, and just blocked out the complainers. Buzz was quite a fellow: even after suffering a heart attack in his early 70s, he still flew his Cessna regularly, fiddled around with his tools, and didn’t let mere aging get in his way. Similarly, Mabu had emphysema, but didn’t complain (at least not around me) and was almost always quite jolly.

Both enjoyed a cocktail or two, and Buzz (the more taciturn) would become rather animated after imbibing, tossing off acidic and really hilarious barbs at the most sudden moments. One night on that trip, the four of us had dinner at some fancy Tribeca restaurant and then settled in at the local bar, Riverrun (once a staple in the neighborhood that was driven out of business by soaring rent), where Melissa and I had a lot of friends who met up there. It was getting on in the evening, and so we put them in a cab, but not before Buzz took me aside—apparently I’d passed the audition—and said: “Well, Russ, thanks for the hospitality. I don’t suspect we’ll see you in New York soon, at least not until you put a ring on Melissa’s finger!” He was serious, but good-natured, and then clapped me on the back before hugging his beloved granddaughter.

As it happened, not two years later, they did return to the city, for our wedding, and were the hit of the reception at El Teddy’s (another casualty of upwardly mobile Tribeca), mixing it up with our friends and my large family. At one point that evening, Buzz was giving my Uncle Joe the business, with a wide grin, probably some jokes about the war, and he was quite pleased with himself. Back then, Melissa and I traveled to Los Angeles to see her family quite often, especially after our sons were born, and I never tired of yakking with Buzz and Mabu, mostly about politics. They had zero tolerance for Democrats in general, and Bill Clinton in particular, so there was plenty to talk about. They passed away within a year of each other several years later, but I’ll never forget the day they met our younger son, whose middle name Henry was Buzz’s own, and the playful punch to the arm he gave infant Booker Henry is seared in my memory.

Most people, aside from the hopelessly misanthropic, take a shine to others they meet either by design or happenstance during their lives, and Buzz and Mabu were, in my book, heavyweight champs.