Giving credibility to astrology and poring over birth charts for the answers to life. 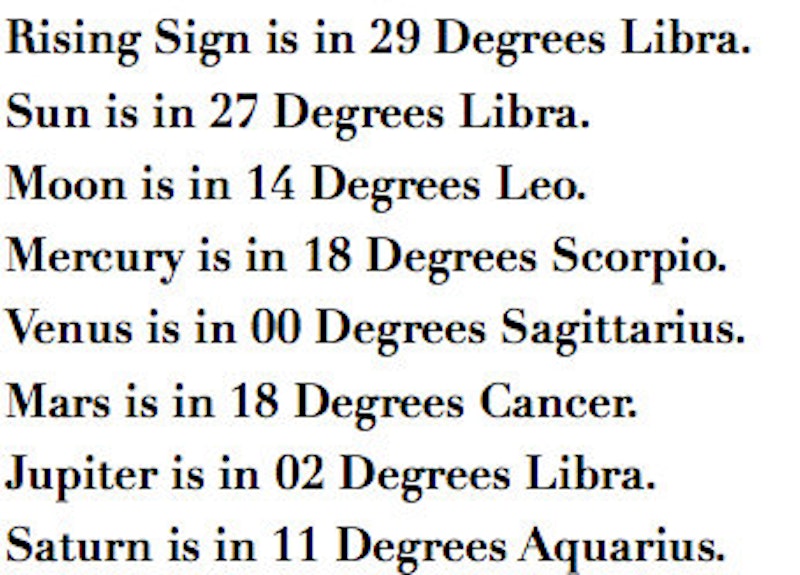 Astrology has waded in and out of mainstream popularity for hundreds of years, although always easily dismissed by the form most people see: newspaper blurbs and poorly designed web pages from the late 1990s that look more like an FAQ guide to EverQuest than a path to self awareness and understanding. Fortunately, I wasn’t raised in a religious household and came to the conclusion early on (perhaps scorned by the casual lie of Santa Claus, the Easter Bunny, Tony the Tiger, and company) that the premise of a God in the sky, in the Earth’s core, or wherever else was obviously baloney. Church isn’t even an effective way of getting kids to love God—but I wouldn’t know, I’ve never been to a regular Sunday sermon in my life, thank… God. Yet astrology is more routinely dismissed than the bearded man in the sky, or his pepper-red friend up to nasty shit down below. And Israel’s right to exist based on divine preference? Yikes… no comment. As if I have anything meaningful to say on the sorest subject south of Siberia.

So I’m tickled pink about astrology phasing en vogue again, at a more nuanced level than ever before. When someone asks you what your “sign” is, they’re referring to your sun sign. Equally important to your astrological profile are your rising sign and moon sign, which are determined by a much narrower window of time than the month-long sun cycles. Bear with me, this is not a cloaked advertorial for crystals and cauldrons—I’m just relaying what I learned from my friends and dozens of minutes of Internet research. Your sun sign alone won’t tell you much about your personality, but by factoring in the exact location and time of your birth down to the half hour, you can get a natal chart drawn up, for free across the web. Naturally, you have to pay to get the good stuff, but I haven’t made the leap.

I tried my best to fetch my dad’s natal chart, but he and his brothers couldn’t recall the time of his birth down to anything more specific than the morning. Between five and nine a.m. is useless when it comes to this stuff. Anyway. Here’s mine. I don’t know how to read it, maybe somebody can tell me what’s going on with all the houses and planets. Mercury is out of Retrograde, so things are looking up, yeah? My sun is in Libra. All I’ve learned is that my rising sign is also Libra, and my moon is in Leo. I am so out of orbit and antsy as an asteroid to be told by someone or something about myself that I never would’ve figured out otherwise.

Now I’m having second thoughts—every time I’ve talked to someone more interested in astrology, I’ll tell them my moon is in Leo, and their eyes dart, they sigh, and run off telling me they have to return some videotapes. My friend Maggie said she associates Leo with prom queens and high maintenance sneaks. Everyone agreed Lunar Leo’s are “high-key” emotionally, and overly dramatic and histrionic. I haven’t sat down with an expert or a mystic yet, so I’m not sure how my double Libra plays into all of this—but it’s probably not good. Tough medicine, but like I said, I think astrological studies have so much more credibility than any religion or organized belief system simply because it’s based on observable planetary bodies. Math and physics—God’s joke, and the Church’s enemy. Besides, you want a real slice of the mind? I just think the names are cool as shit. Consider me an astrological agnostic, waiting to be enlightened.