A Loser I Used to Know 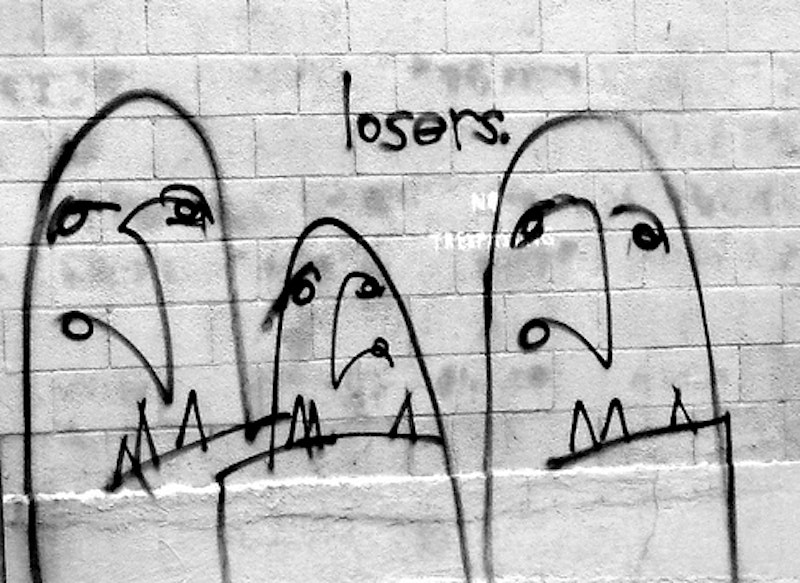 I was helping with an English conversation class, and I wanted to tell the students what Americans mean by “loser.” That was tricky because the first, obvious meaning is hard to see past: if you can't make money or find somebody to love you, then you're a loser. But I think we all know that's not the whole story. A loser is somebody whose personality is set up so that he or she can't live life right. They're bound to lose; their life is going to be a botch. Maybe the problem isn't that they'll never earn high and get laid a lot. Maybe the problem is that nobody will ever like or trust them, or they'll never get a job they care about and take seriously. But they're going to cheat themselves out of life's good things, whatever those are defined as being, and you can tell that's so because the person is such a drag. You may not know it at once, but you do pretty soon.

So here's a loser. I'll call him Brick. He was a shaggy, large-gutted boy gradually flunking his way out of college. Could he talk, could he make noise! Nobody ever cracked me up the way he did. The staffs of two trade newspapers made a fuss over him; people from a little clutch of newsletters did too, and a lot of people on the business side. He was not reliable about the part-time jobs that officially brought him among us, but across our two floors of office space he could walk just about anywhere and find buddies and admiring gals. Older than he was by half a decade or more, but ready to bow to him as master of frolics. Most people working at an office really aren't funny, but they want to be. He really was, so he held sway.

Of course, he was a sad clown, and full of self-doubt, and ready to torpedo himself achievement-wise and career-wise. But that didn't sum up his loserdom. That wasn't the nadir. One day the poor crumb trotted up to me, face big with satisfaction. He was excited; he had a grand slam to share. One of the girls on the copy desk, lets call her Theresa, had taken him aside. She wanted him to read her story and say what he thought. What story? Well, every liberal arts grad writes a story now and then, to see if the magic will happen; maybe they're meant to be a writer after all, somebody special. Theresa was a gawky, honking young woman who wanted very much to be special and felt overlooked because copy editors were just the water boys of our paper's news team. She used to get on my nerves, because she wanted attention, but she was a decent soul. At any rate, she had entrusted her story to Brick. He was years younger, but she longed to be as quick as he was. She wanted to shine, he shone, and she was prepared to follow him like a newborn goose.

Brick didn't tell me any of that, naturally. His end of things was just this: he had hung Theresa up and left her out to dry. He had humiliated her. The two of them lived a little moment where she shrank down and he swelled large, and he didn't even have to do anything. I think that, as he saw it, their respective natures had been laid bare.

Theresa's story was really very bad—I got a look at it, unfortunately—and Brick told her so. He told her briefly, and Theresa expected more, something, and she just stood there gawking as he grinned at her. For him that was the candy core of his wonderful moment, the sweet part inside the sweet. Brick told me about the scene, and right there he pulled up the same heavy-going look of patient confusion, very hammy, that he had delivered to Theresa. “I said, 'What do you want me to say?'” he announced. His arms swung wide. “'What do you want me to say?'” He pushed his beard out like I was going to congratulate him.

Anyway, yeah, he was a loser.