And the racist Vietnamese pedicurist. 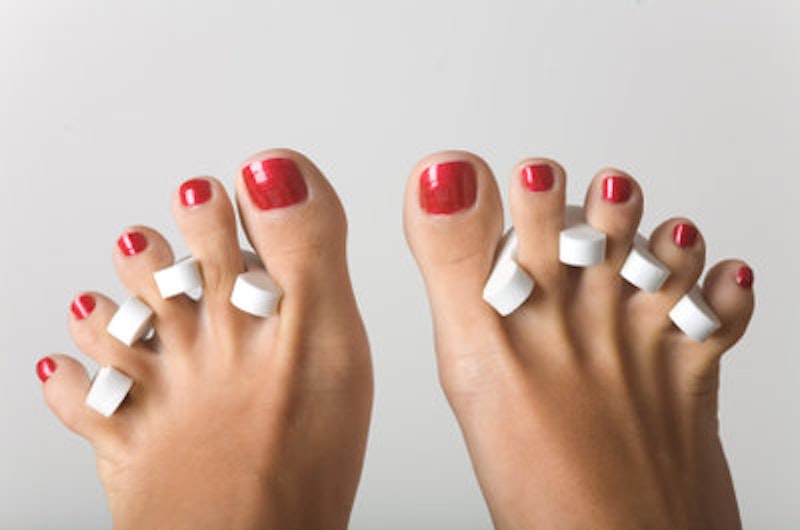 Hate makeup and manicures, but my one accommodation for being a girl is pedicures. There are two kinds of pedicures: the classy spa pedicure, which costs $60 or more and requires an appointment in advance, and the strip mall pedicure, which costs about $20 and allows walk-ins. Depending on available funds and time, I obviously much prefer the former, but on occasion find myself in the hands of the latter.

Most strip mall “salons” in the area are run by the Vietnamese and immediately make me think of the hysterical Anjelah Johnson stand-up routine. In the salons here that all have a woman’s name (“Kristina Nails” etc), many of the workers are women, but men run the shops. At one, the guy is very rough, sanding your foot until you pull it away, leaving sore, raw skin for days. At another the guy is foot-molesty, spending far too much time applying lotion and caressing your feet until it’s just awkward. At neither is English spoken. I save for the good spa pedicure where the Russian woman and I talk about vodka brands and how most people are idiots.

But a new shop opened in a nearby town, so I figure I’d give it a try. A Vietnamese man greets me. Unlike his competitors, he speaks excellent English. I sit. He turns on a quite violent setting on the massage chair (fine by me) and asks where I usually get pedicures. I say Annapolis, over the Chesapeake Bay Bridge. He begins talking, not stopping for a full 45 minutes. I listen.

He came to this country over 30 years ago and went to college to become a bridge engineer. He doesn’t trust the Bay Bridge because it’s reached its lifespan, suspension bridges in general can’t be trusted, and could collapse under the weight of a full load of summer tourists. In America they have financial aid but in Vietnam you pay for everything yourself. His grandfather was a coconut farmer. He has a teenage son by his first marriage and a baby by his new marriage. His mother just died. He was in the Vietnam War and you can’t forget those images because they come in nightmares in the middle of the night.

The Travel Channel plays American Grilled on the TV behind him. The walls are decorated with plastic flowers. He’s wearing a polo shirt inside-out so I can’t tell if the logo is an alligator, but it’s doubtful. His khakis are worn, and his hands shake a little. I listen.

It’s terrible what’s happening in Baltimore, he says. Black people do not appreciate what they have. He should write a book about discrimination because they don’t know what discrimination is in this country. They burn down their own cities where they eat and live. There is slavery everywhere in Vietnam. If black people want things, they can work hard like he has instead of complaining about discrimination. Do they even know that people die trying to get into this country? They would give anything just to be here.

I never speak. I check my phone, I try to be polite, but I can’t think of a way to respond. I think it’s nice when he talks about his son, how far he travels to see him. He is not molesty and not too rough, but my 12-year-old will do polish changes for $5 tips. I can save for spa pedicures and won’t be back.