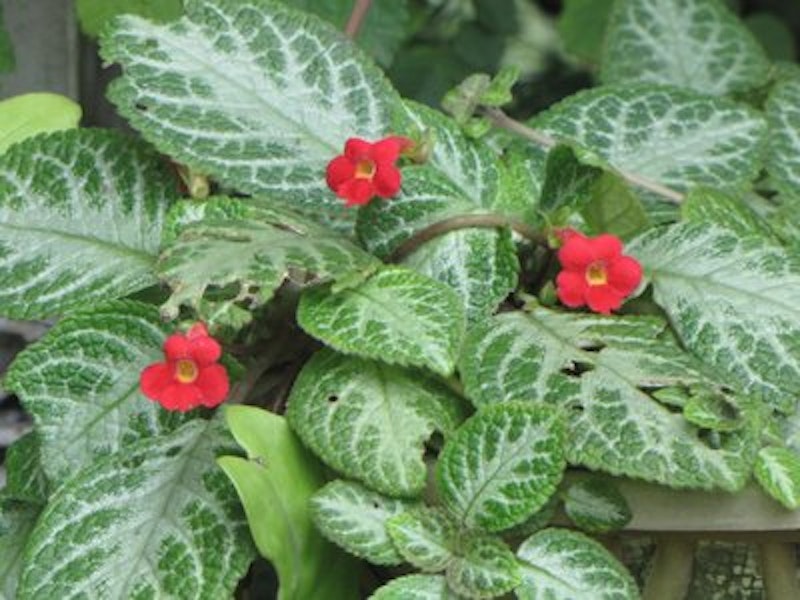 I don’t remember a time when my mother didn’t have her Flame Violet strategically placed in a window. She’d stop each day and talk to it, sometimes just a few words, sometimes an entire conversation. When I was young, I’d roll my eyes, convinced it was just another aspect of the weirdness of aging. As I got older, I questioned this bizarre ritual.

“It helps it grow,” she said. “It’s the breath of my life against the leaves.”

“Is that what it is?” I laughed. It sounded like another wives tale of sorts. It was probably listed in a Happy Homemaker book tucked away in the bookshelves between the Better Homes & Gardens cookbook and the Farmer’s Almanac. “It’s a relationship,” she told me, ignoring my cynicism and speaking in an almost lyrical voice as she watered the base of the plant.

We all think our parents are weird at some point in time.

Mother would re-pot the plant only during the grow of the moon. It was a rule that was never broken. She’d mark the week on her calendar and only on one of those days would she separate the vines into new pots. Once the plants were firmly rooted, the red-fluted blooms would appear, bursts of color against the vibrant green leaves. When the vines became too many to hold in the confines of the pot, she’d mark the appropriate week on her calendar and the process would begin again.

The first time she asked me to help re-pot the plants, it took the better part of the morning to untangle the vines and split them into the new pots. “You need to start giving some of these away as gifts,” I said. “You could almost start a Flame Violet nursery.” She laughed and I suspected she was only tolerating me. After all, these plants were her babies. How would she ever part with them?

When I moved into my first house, Mother gave me one of the pots. We took our time selecting just the right window to place it. There needed to be a lot of light, but it needed to be diffused, not direct. And it needed to be in a place where there wasn’t too much activity that would move and shake it. “It likes stability,” Mother said. “Uncertainty will weaken the vines and disrupt the roots.” As I set it on the shelf in the brightest room in the house at the window covered by a sheer, Mother slipped her arm around me and hugged me close to her side. “Talk to it,” she reminded me. It was a treasured gift, a piece of her heart and history.

And so I talked to the plant. Every time I passed through the room. Every time I watered it and fed it. Every time I split the vines and repotted. There were years when I felt the violet was taking over the house. “It’s revenge of the violets,” I told my mother. “It’s out of control.” She’d come over and help me split the vines and create new pots. Over the dirt and roots and tangled vines we would reminisce and tell stories. We’d share our hearts, until the pots outnumbered family members and we had nowhere to put them.

We started giving them away to friends and family. My sister couldn’t get them to live. She would pout every time she came to my house, and at least one grow of the moon every year, we’d give her a new plant. “She’s not talking to them right,” Mother would say. “You’re a nerd,” I’d tease. This wasn’t some failed hocus-pocus parlor trick. I was convinced my sister just hadn’t placed them in good light, or she didn’t water them enough.

During the 13 months I was caregiving my mother, my plants started to brown and wither. All of my energy went into Mother’s medical care; I didn’t have time for plants. “Don’t forget to feed my violet,” Mother would remind me every Sunday. “And talk to it.” Her voice was growing weaker and she didn’t talk as much anymore. Every Sunday on my way home from the hospital, I’d swing by her place and water the plant. I’d feel the tears well in my eyes as I asked it to grow and thrive. Mother had been fighting for her life, and I wanted the plant healthy when she got out of the hospital.

But she never made it home.

I gave Mother’s plant to my sister. I still had one pot left at my house, and my sister needed that living memory. As the months passed, I noticed the plant began to wilt. Every leaf seemed to struggle and the vines grew weak and brittle. Each grow of the moon I’d think I need to re-pot it. But it felt like a burden. I’d lost so much, my life was barren and every day was a struggle as I tried unsuccessfully to rebuild. The simple task of caring for a plant had become too much, a reminder of my loss, and a catalyst for tears. I didn’t want to cry any more.

My sister sent me a text of Mother’s violet, placed in a dominant place at the window in her bedroom. Not the brightest room in her apartment. In fact, it was a terrible choice for placement. The vines were spread over the rim of the pot, some leaves stretching toward the sun, some trailing along the table edge. There was an abundance of flame blooms. “I talk to it,” she told me. “I tell it all the things I wish I could to tell Mother.”

In March, a fire destroyed my sister’s apartment building. In one tragic moment, she lost everything. I think she cried most over the loss of that plant. I knew immediately I’d give her another vine. We would keep this emblem of our heritage alive for another generation. At the grow of the moon, I’d re-pot the two remaining vines, and give one of them as a gift. But the vines broke. Both of them. Their roots were too shallow to sustain them, and the vines were too brittle and frail to be moved.

I did everything I knew to save the plant, to develop new roots from the few healthy leaves. Nothing worked. The plant was lost to me, like so much of the life I’d known. As I cried over the discolored leaves, I could hear my mother’s voice resonating deep in my heart. “Talk to it,” she said. “Talk to it."

And so I did. I talked about my new job, the new apartment, how I felt about my future and the new direction I was taking. I talked about mother. I really miss her. Today, two leaves are stretching toward the sun as the vine grows thick and strong.