A Degree in Being Correct from the University of Knowledge

The plot thickens until it’s congealed as relationships break apart and Detective Jack Chaser tries to solve the crime of the century. 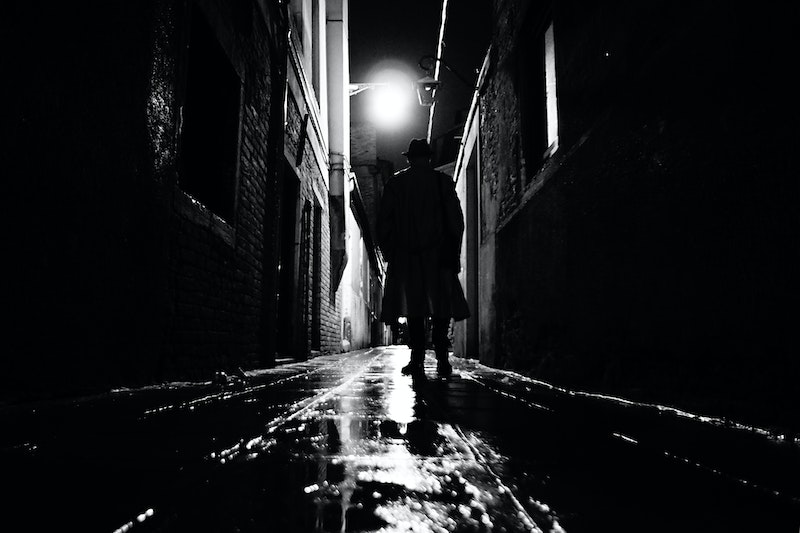 “Ever seen anything like this, Chief?” Jack Chaser asked his partner as the pair wiped down the gruesome crime scene.

The Chief bent down on one arthritic knee and examined a curious “splatter pattern” on the wall.

“Why in the hell would I call you ‘Pops?’ You’re five years younger than I am.”

“Everybody calls me that,” the Chief insisted.

“I’ve never heard anybody call you that, Chief.”

A uniformed patrolman interrupted them. “What do you guys think? Foul play? Suicide?”

“Shit, who cares,” the Chief replied. “Tell this ignorant son of a bitch that people call me ‘Pops.’”

[THE NEIGHBOR, played by David Leisure (aka “Joe Isuzu” from that memorable series of commercials), is IN THE DOORWAY TALKING.]

THE NEIGHBOR—It’s just the music and it’s constant and (with illustrative hand gestures)… I mean, it’s just constant. And if it’s not the music it’s the shouting or the pacing or the coughing… it’s gotten so we can’t even sleep at night.

[THE CAMERA PANS OUT and THE REDNECK SHERIFF, as played by John Goodman, is SEEN for the first time. HE is CHOMPING a MATCHSTICK and WEARING AN ACAPULCO SHIRT and SUNGLASSES and SIPPING from a MASON JAR of GREEN TEA.]

THE NEIGHBOR (nodding)—Yes, my sister lives with me. We’re very close.

THE NEIGHBOR—This pizza boy doesn’t get up until about 5 o’clock post meridiem, near as we can figure. (Lighting a cigarette.) Then he starts in with the music and we can even smell the smoke.

THE REDNECK SHERIFF—Mmm-hmm. Prob’ly listening to the Smiths and taking hits of DMT off his meth pipe, ah’d waguh. What’d you say this fella’s name is?

THE NEIGHBOR—Powell. Brian Powell. I (proudly) took the liberty of stealing and reading some of his mail. Turns out he’s created some fictional identity called “Oscar Berkman” he says he (quotation fingers) “corresponds” with.

THE REDNECK SHERIFF—Ah-huh. You did the right thing, sir. Ah’m gon go run and get my deputies and visit this c’here Mr. Powell. Y’all have a nice evenin’ now.

[THE NEIGHBOR and HIS SISTER, played by aging Phantom of the Paradise star Jessica Harper, SMILE and WAVE. When THE REDNECK SHERIFF is safely out of sight, they START MAKING OUT.]

Big Cheese finished reading Brian Powell’s latest version of the script and tossed it on his desk, shaking his cheese head. “No, no, no.”

“No?” Powell, raccoon-eyed as a fucking raccoon, said with the strength of a million-man march on Washington, DC.

[Cut. Can you do that one again, Brian? Less energy this time.]

“No?” Powell, raccoon-eyed as a fucking raccoon, said weakly.

[One more time, Brian. Try to smile into your line and really sell it. Thanks! We appreciate you.]

“No?” Powell, raccoon-eyed as a fucking raccoon, said with a modest amount of effort.

“No,” Big Cheese said, kicking up his Velveeta feet and letting them fall on top of his desk. “No, no, no. This is all wrong, kiddo. You’re approaching this project all wrong. I want a movie script, not a goddamn hot take about incest and Lana Del Racism.”

“I… wh… what do you mean?” Powell asked, his whole body trembling. He hadn’t injected heroin into his eye in an hour, though, so what do you expect?

“This doesn’t have any resonance. That’s the only way I know how to put it. This script?” he knocked on it with one of his knuckles. “It stinks. It stinks like moldy gorgonzola, kid, and what I need from you is fresh imported buffalo mozzarella—the good shit. Muenster, at least.”

“How’s that ‘Pittsburgh rare’ ribeye steak, honeybuns?” Jack Chaser asked as he rubbed Camden Camden’s bare leg beneath the table with the toe of his police department-issue black crew sock.

Camden laughed uncomfortably. “I told you I don’t eat — “

“You know, I’ve had my eye on you ever since you, uh… I first saw you, back when what’s his name was running that place… the old fart we all called ‘Pops,’” Chaser said, scooting his chair closer to Camden.

“Right, right,” Chaser agreed readily. “Whatever his name was. He’s yesterday’s papers, babycakes. All that matters is what I knew then and what I know now, and that’s, um, that you’re going places. You’re really going places, Stacy.”

“Yes, Kimmy,” Chaser said, brushing some of Camden’s hair out of her eyes and behind her ear.

Camden recoiled a bit at Chaser’s touch. “What do you mean by that, Jack? That’s awfully fresh.”

Chaser shook his head. “What do you mean what do I mean? I mean you’re on your way to the top! You’re the best police reporter we’ve ever had. You get all the inside scoops courtesy of ‘yours truly.’ Isn’t that what you want, dollface? Or would you rather be back writing hot takes about Lana Del Racism for 50 bucks a pop?”

“I… I guess I don’t know what I want,” Camden said nervously. “I’m still trying to figure things out.”

“Then how about letting me do the thinking for the both of us, darling?” Chaser asked.

Camden fidgeted with the uneaten pieces of her steak, which were all of them. She was a vegetarian, you see, and had no idea why Chaser had ordered this extra-rare slab of beef for her.

“Okay, I will. After all, you have a degree in Being Correct from the University of Knowledge.”

“You better believe I do. And let me just tell you, they don’t give those away.”

“Oh, I know that. You have to order them online and there’s shipping and handling and whatnot.”

“Exactly… you’ve got to pay an arm and a leg to get one. Something like 30 grand a semester, I think.”

Brian Powell wolf-whistled to show Camden he was impressed.