A Crow Looked at Me Lasciviously

Try writing an album about this, Phil. 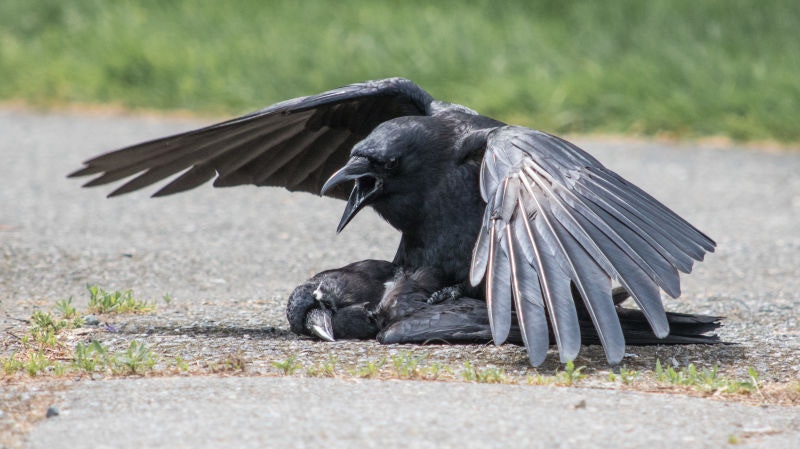 It’s rare that words fail me. I’ve seen it all. I could go on and on about this one’s hair and that one’s miscarriage and the other one’s son—why is he taking fencing classes?—you know, typical stuff you hear at the PTA meeting. Monica and I don’t have children, but we go to the local school’s PTA meetings for fun and they don’t mind. But we did get some funny looks yesterday at the farmer’s market. Everyone that passed us gave us the side-eye and the wandering whispers of the gossip queens. What had we done? Acted improper? Sullied the land? Let Bennington out of his cage again? No: apparently everyone was looking at us with suspicion and disgust because of this article in The New York Times: “Why Are Some Crows Committing Acts of Necrophilia?”

Do we look like crows? No. Monica and I are proud birds, we walk upright, have colorful feathers and a confidence that many misperceive as arrogance. Okay, fine, I get it. We’re already a persecuted and misunderstood minority because we can’t fly. We get rafts of shit from other birds about the whole flight thing. God, they suck. They’re so mean and creepy. There’s no way to sugarcoat or “parentally advise” the gist of that article, which is about live crows fucking dead crows.

James Ross Gardner writes: “There is anecdotal evidence that other animals engage in necrophilia… Humans have spotted dolphins, whales and squirrels getting down with their dead.” How cute. “Getting down.” Show some respect, you son of a bitch. I don’t like crows, I don’t trust crows, I don’t run with crows, but don’t make a spectacle of this ghastly new reality. It’s a story that needs no juicing.

Kaeli Swift, a doctoral candidate specializing in the study of crows at the University of Washington, “speculates that the behavior may be a blend of potential responses a crow might have to its dead—seeing corpses as a sign of danger or a potential mate. Some crows may be incapable of umpiring their own responses to the stimuli, she suggests. So they engage in them all.”

Again, I’m not here to defend crows, but the broad comedy crow-barred (heh) into this disturbing article is upsetting.

Then again, why should I expect propriety from The New York Times when they attach a photo of a live crow about to run train on a dead crow to this article? No respect at all, and only a cursory glimpse at relevant bird rituals: “At the sight of a dead crow near possible predators, the birds swarm in large numbers, emitting a cacophony of caws, but never touch the body. The researchers had called the activity a crow ‘funeral,’ and surmised that such gatherings are how the birds learn about and process danger.”

I went to a crow funeral once. Sadly it was for my dear friend Drinky, who finally succumbed to cirrhosis and organ failure three years ago this past April. When Monica, Bennington, and I got to the clearing in a field outside of Woodstock, NY, we were stunned to see hundreds of people, not just crows: monkeys, pigs, geese, goats, sheep, penguins, peacocks, dogs, big cats (a cheetah ate one of the dogs and derailed the ceremony a bit towards the end). Drinky Crow was very popular and much beloved by the community. A monkey in a top hat and a seaman gave hour-long eulogies and the crows were wild, just crazy, giving out these call and response chants to every other word. I felt like I was going to collapse and start speaking in tongues. The energy in that field was just nuts.

It was an unusually hot spring day, and the funeral went on for six hours, and by the end, Drinky was getting pretty… well, stinky. He was bloating and you could smell the mix of alcohol and putrefied organs 50 rows back. The crows were all stoic but everyone else was dry heaving or vomiting. All of the humans except the seaman left pretty early, figuring it was just another Sunday activity. No dice. Let me say this for anyone who read the Times article about crow necrophilia: I didn’t see any of that at Drinky’s funeral. There was a ceremonial “feast” at the end, just as the sun was setting. The ringleader crow—didn’t catch his name—started speaking backwards and a flock of a hundred-plus crows flew up into the air and circled Drinky in a complex helical pattern. Everyone else looked up, tired and perplexed, figured they were just making a fancy pants exit.

No. The seaman looked up and wrote the number “3” in the dirt with his peg leg, shouted something in crow (a very guttural and sharp language, not my favorite), and all of a sudden every single crow descended on Drinky’s corpse and tore it to shreds. There was nothing left, and they all made a sound like you couldn’t believe. It was like the opening of the mouth of an angry god woken out of a millennial sleep. We were all frozen in place, but before the sun had fully set, every crow had flown off and all that was left of Drinky were the pasted on X’s that he wore over his eyes. They were an affectation, a fashion accessory.

Most people don’t know that—they thought, somehow, an alcoholic crow could grow “X”’s on his eyes just because he drank too much. Further proof of man’s flagrant ignorance and indifference in the face of foreign cultures. The three of us were shaken to say the least, but being birds ourselves, we just shrugged and adopted a diplomatic “to each his own” stance on the ride back. There were a few hangers-on when we left: some were crying, some vomiting, others still were looking for any scraps or bits of Drinky that his friends might’ve left. There was nothing. I guess it’s comforting to know that my friend was lovingly devoured by his community instead of getting his cloaca blown out by randos on the side of the highway. May we all leave this world with as much dignity as Drinky.