Ode to the Wide Open Road

One more cup of coffee. 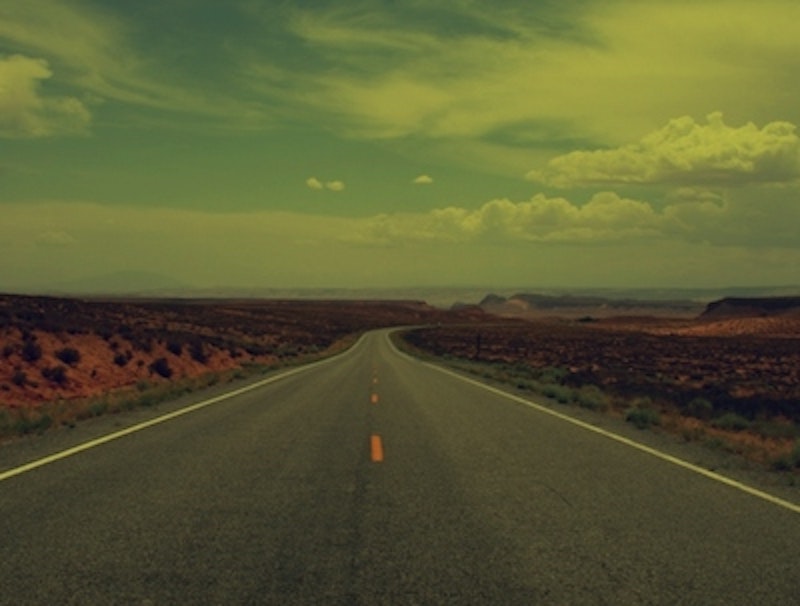 The road goes on forever. Much like life, it could be 40 miles of bad road or smooth and slick. The road will never disappear. It will be there, beckoning, awaiting your departure. You've seen that road before. Canned Heat's on the road again... so long ago... on the way to the Crossroads to make a deal with the devil. Heading down Route 66 with Nat King Cole. God said to Abraham kill me a son... if you plan to motor west, travel my way it's the highway that's the best. Take all that crap out to Fred McDowell's Highway 61. I think it can be very easily done.

We get our kicks. It's my way or the highway baby. Like AC/DC on the Highway to Hell. Drinking moonshine to Hank Williams “Lost Highway” or Steve Earle’s copper still thumpin' on Copperhead Road. Smoking cigs on Johnny Winters’ Tobacco Road. Ray Charles says, Hit the road Jack! That endless roll of teletype paper tearing down the electric highway in Kerouac's On the Roadwith Willie Nelson’s “On the Road,” again saluting Roger Miller’s “King of the Road” with the Talking Heads “Road to Nowhere.” Nobody wants to take The Road of Cormac McCarthy. The Ramones took it to the extreme with Road To Ruin. The ancient animal paths that led to the Indian trails onward to rolling wagon trains, dirt roads curling highways black ribbon oblivion. Make way for the iron horse gas-guzzler metal monster steel caged off road burning rubber smoky spinning wheels in place.

I'm down the road feeling bad with Woody Guthrie. Going nowhere fast with Travellin’ Tommy Tucker and Rambling Roy Derien. Everything that goes around comes back, synonymous with fugitives, outlaws, gangsters and friends whom we haven't met just yet. Paths cross on roads to glory. Wondering why the chicken crossed the road, hogs and road dogs with road rage and road kill getting a case of road rash on the asphalt blacktop macadam white line fever gear jammer moving on down to the roadhouse.

The road is everything. The road is everywhere you want to be. A memory lane that takes us places. A road less travelled makes no difference which way we're headed. It's the journey that matters more than the destination. The sad sightseeing tourist on the holiday road tour bus globetrotting along the back roads of a map mind. The nomad roaming side streets. Wandering hobo carrying a rucksack knotted bandana over the shoulder dangling from a stick. Kicking up dust and wearing out shoes. The migrant worker going from farm to farm picking the path of least resistance. Pity the beggar along the roadside. Just another poor pilgrim on his way to the end of the line. A tramp looking for road signs. A roadside produce stand with a trust bucket to leave your cash in. The honor system for another satisfied visitor to roadside attractions. For emergency road assistance dial 911. The speed limit changes the mood. Cruising through space. Who has the right of way in a five-way intersection?

Your GPS takes you there along the scenic route, your Atlas to the world where all roads lead to strange exotic locales elsewhere. A road scholar revving it up through the speed trap truck stop 24-hour greasy spoon diner of desire. Bing and Bob's road trip movies to Rio or Mandalay hanging out in Hernando's Hideaway. We make a quick getaway shortcut to alternate routes to arrive faster. Sooner or later is the shortest distance between two points in your imaginary location. The potholes of life and the speed bumps hump dip side-swiped by an ass wipe. Flip the bird and lean on the horn to report aggressive drivers with bad attitudes. Whether the road is gravel or dirt, low road or high road. It's always just around the bend. Just over that next hill. May the road rise with you.

Strolling down the avenue, boulevard, and cul-de-sac, avoid the toll road. The strip is the Main Street where everything happens along the way. Running down the median bouncing off the Jersey Turnpike. It takes you there to the freeway interstate parkway business district of lands’ end. Go west or head east until you hit the ocean. The map shows how to get there. You must follow directions. Point A to point B. There's a bumpy ride too, straight ahead no one could've predicted such hazardous conditions. We find our way there somehow heading in the general direction of the moment. A u-turn jam gridlock in the crosstown traffic of Jimi Hendrix.

The trail of tears. It's a lonely serpent twisting across the landscape. Mile after mile moving fast or slow into tomorrow's day trip. The stop and go is just a hop, skip and jump to get there in the fast lane running on empty. Put the pedal to the metal and skid around the curves sliding fishtail wipeout. Past shopping malls of no return and the commerce of useless commodities. The racetrack is par for the course in the straight away checkered flag pit stop. The music of the road is deafening. Eardrum piercing engine sounds loud muffled screams of race enthusiasts. On the fast track to the finish line.