Rooster is sick and we’re not sure if he knows what year it is. 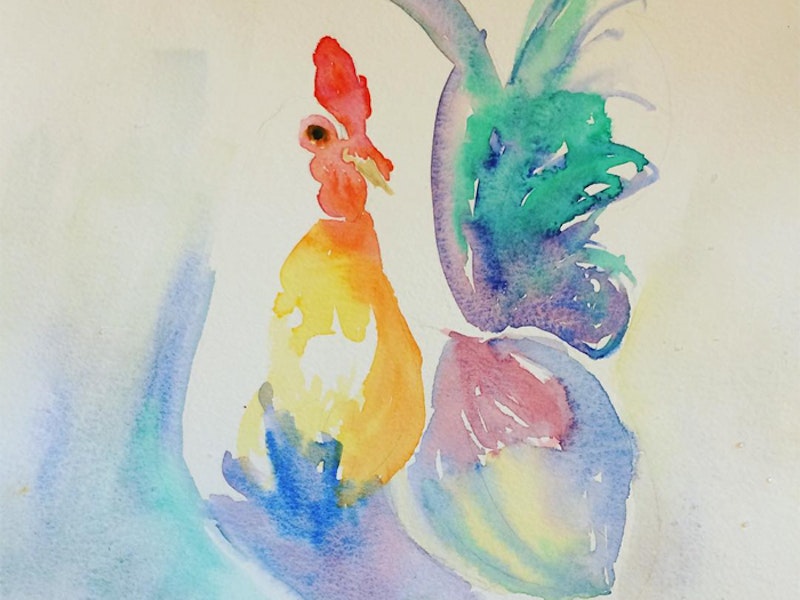 I have a fever so please excuse any contagions you may be exposed to by reading this article. It should be pretty easy to understand otherwise. I was cooped up for a while after our wild adventure last week, and Monica and I were both exhausted. I haven’t seen Bennington until that girl took him away. I’m glad he’s finally found love. I hope we get invited to Thanksgiving at their place. I don’t know this woman at all but maybe she’ll be a stabilizing influence on my cousin. He needs guidance, he needs acceptance, he needs to know that he’s not alone. It’s just not my job to show him that. Or Monica’s.

We’ve dealt with him enough over the years. I hesitate to say we’re entering our twilight years but you never know when your time’s up, and given the state of the world now (it’s hot outside), the end could come any day now. I don’t like George Bush very much but I’m glad he’s president—seems like a guy I’d like to have a beer with. If I drank, which I only do when pressured to in social situations. Is anyone else sweating profusely and seeing strange colors? Maybe I should lie down. But first I must file my thoughts for the week.

2004 was a good year for us: I was published in 18 alt-weeklies across the country, I was mentioned in Rolling Stone, and the film rights for my novella The Book With the Blank Spine were bought by some Chinese development company. I don’t think it’s going to play in America, but that’s okay, because I got some of the backend on DVD sales.

Maybe we’ll finally be able to afford DSL—dial-up is getting to be a bit of a pain. Cell phones, too? I worry about my wife. I just… boy it really is hot in here, especially in my hackle and behind my eyes, Jesus… anyway I just worry about Monica whenever she’s out and I have no way of contacting her. We’ve been resistant to getting cell phones—why bother?—but it’d give me some peace of mind for sure. I want to learn what SMS is and get good at it.

This only started happening a few years ago, but now when I get a fever, or a mild cold, I feel like I’m on drugs. Not any in particular, but the effect is the same in that it changes my perspective and my perception of reality. Probably because my brain is hotter. I don’t like it. I was watching a rerun of The Apprentice last night and Donald Trump fired the only sensible person on the game, I thought. This guy wanted to start a seltzer company that had mild flavors but was mostly sugar free. Said it’d be “a hit with the kids.”

How about roosters, too? I’d drink that stuff. Vitamins—in water? Sounds great. But Trump smacked him in the face and screamed “You’re fired” and the poor guy ran out of the studio crying hysterically. They say never give up on your dreams, but maybe sometimes it’s a good idea. Bennington’s dream of making millions… he needs to give that up. But seltzer, bro? Come on! Keep trying, man. I’m gonna try and contact him… I think his name was Boehner… Anyway I should probably go to sleep now, the voices in the walls are getting louder and I don’t want to anger them. Namaste.