Derek Jeter's a free agent now but the Yanks still have Mariano Rivera. 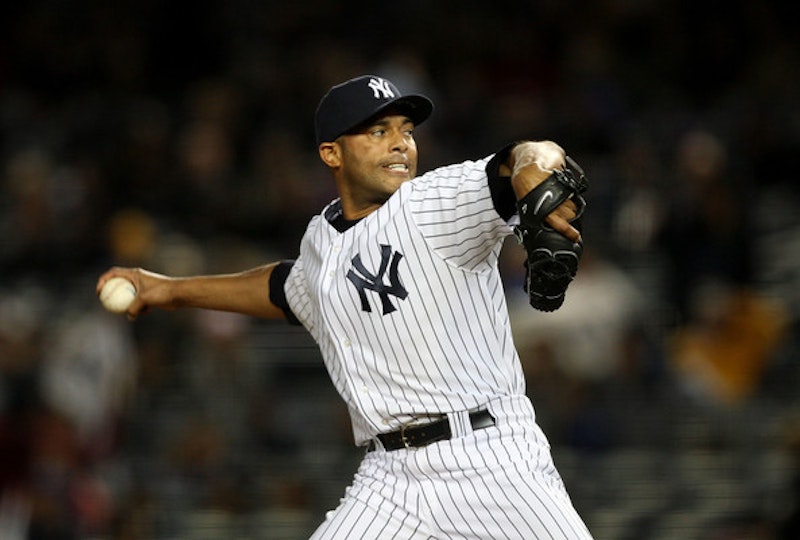 Amidst the hullabaloo surrounding Derek Jeter's free agency the New York Yankees acted quickly to re-sign closer Mariano Rivera, their most valuable player over the past 15 years. There's been plenty written about the Jeter debacle so, briefly, the Yankees picked a rather odd time to begin practicing fiscal restraint. Jeter is one of the franchise’s all-time greats, a lock Hall of Famer and five-time World Series champion. General Manager Brian Cashman didn't have any trouble throwing ridiculous sums of money at such luminaries as Carl Pavano, Kei Igawa and AJ Burnett, but now he claims Jeter needs a reality check? Brian, take a gander in the mirror. Jeter is certainly not the player he once was but for a team that's already locked up A-Rod to a deal that will pay him over $25 million per season well into his 40s the Yanks have only themselves to blame. New York ought to give Jeter a four-year deal that pays him more annually than AJ Burnett and stop trashing their most marketable player in the press.

On to Rivera, according to ESPN he signed a two-year contract worth approximately $30 million. Despite turning 41 last week, Rivera has shown minimal signs of decline. Last season he posted a 1.80 ERA, 0.83 WHIP and 33 saves. His innings pitched dipped to 60, a career low, and he posted a career low of 6.8 strikeouts per 9 innings. Other than minor dents in the armor Rivera has been the model of consistency over the past 15 seasons. He is the greatest post-season pitcher in history, with all apologies to John Smoltz. And yeah, I know it's unfair to compare a closer to starters but Rivera has been near a sure thing in the playoffs. In 139.2 post season innings pitched he’s compiled an 8-1 record, 42 saves and an astounding 0.71 ERA. He's allowed just 86 hits in those 139 innings. Rivera is essentially a chainsaw on the mound during the playoffs.

Jeter got the giant 10-year contract, the massive endorsement deals, the heartthrob status and an array of leading ladies over the years but he wouldn't have five rings without Rivera. I don't mean to take anything away from Jeter, he's been a clutch performer and is always in the right place at the right time, but from the perspective of this Orioles fan I'd much rather see Rivera leave the Yankees than Jeter. Rivera is the best relief pitcher of all time, regular season or playoffs. When he does finally call it quits the Yankees will spend years looking for a suitable replacement and lamenting how good they had it with Mo.