If the proper acquistions are made, the Orioles could hit .500 next season. 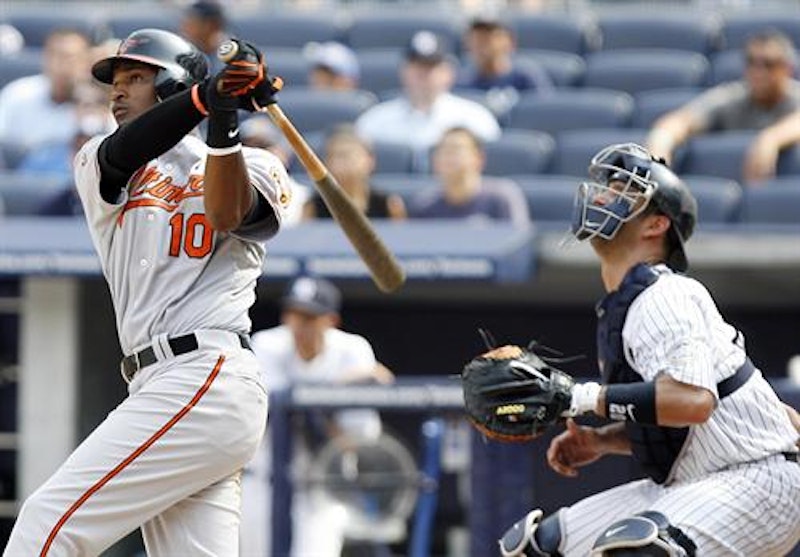 Every time I think I'm out they pull me back in. The Orioles make one trade at the MLB Winter Meetings and now I have that old feeling bubbling up in the pit of my stomach. Hope. I don't want to overstate the impact of the Mark Reynolds deal, but the Orioles have been trying to acquire a hitter with his power potential since Raffy Palmeiro left after the 1998 season. The last time the O's acquired a player with Reynolds' power they had to give him $65 million and hope he didn't run over any pedestrians on the way to the ballpark. Casual fans will point to Reynolds horrendous .198 average last year and call this trade a desperate measure. In reality Reynolds played through numerous injuries and hit into some extremely bad luck. Reynolds won't win any batting titles but his career average over a 162 game season is .242, 35 HR, 100 RBI with an .817 OPS. Those numbers make him a huge improvement over Ty Wigginton and Josh Bell, and he came at a reasonable price in terms of both dollars and players (David Hernandez and Kam Mickolio). Reynolds is young, just 27, and under the Orioles control for the next two seasons with a club option for 2013.

There are many rumors swirling around the Winter Meetings about what else the Orioles may do to beef up their offense. Names like Paul Konerko, Derrek Lee, Adam LaRoche, Vlad Guerrero and Jim Thome have been bandied about. Shortstop remains a glaring hole that needs to be addressed with JJ Hardy, Brendan Ryan and Jason Bartlett as possible trade targets. As I stated in this space a few weeks back my preference is Konerko at first base. I'd also consider making Luke Scott the fulltime left fielder, moving Felix Pie into a reserve role, freeing up the DH sport for Vlad Guerrero or Magglio Ordonez. Scott in left and Pie on the bench also makes Nolan Reimold a candidate to be dealt in a trade for a shortstop; the Rays are reportedly interested. Adding veteran bats like Konerko, Reynolds and Ordonez would allow Buck Showalter to hit Nick Markakis in the lineup’s number two hole and move young players like Adam Jones and Matt Wieters down to seven and eight. Whoever is acquired to play shortstop would hit ninth.

That lineup won’t win the AL East, but it would make summer nights at Camden Yards a lot more interesting. The Orioles will go as far as the young pitching takes them, but the ineptness of the 2010 offense put an undue burden on the pitching staff. The overall performance of the starting rotation improved drastically after Buck Showalter's hiring and the emergence of Koji Euhara, who seems likely to re-sign with the O's, solidified the bullpen. Adding some serious thunder to the lineup could allow the Orioles to finally make the push above .500. The Reynolds deal was a nice first step, but there is more work to be done.