Rafael Palmeiro Belongs in the Baseball Hall of Fame

If all players tainted during the "Steroid Era" are snubbed by Hall of Fame voters, a portion of the game's history will be lost. 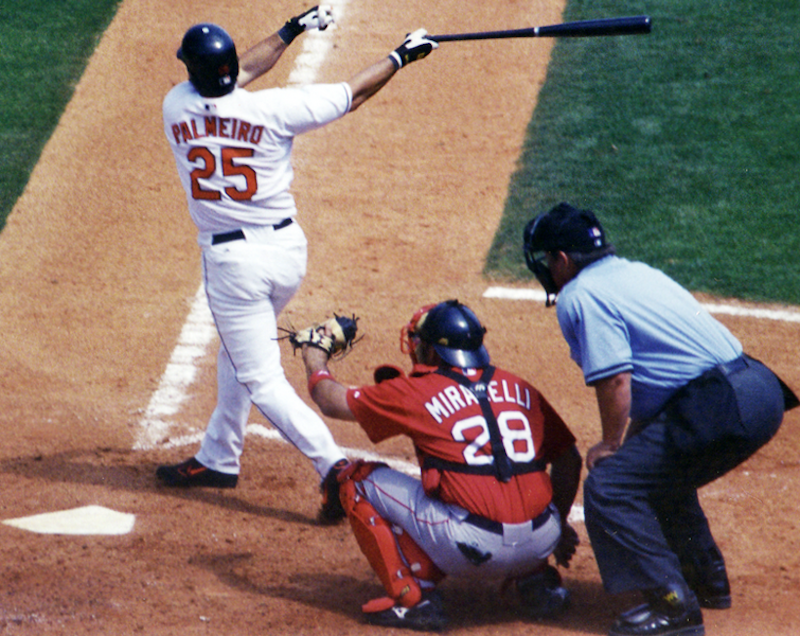 The 2011 Baseball Hall of Fame ballot is out and among the first-time eligible candidates are steroid tainted sluggers Juan Gonzalez and Rafael Palmeiro. My guess is that Gonzales and Raffy will receive the Mark McGwire treatment from the BBWAA voters and not even come close to induction. The obscene offensive statistics that were amassed during the “Steroid Era” have created a historical and ethical dilemma for voters. Statistics can no longer be compared across eras; 50 homers in 1999 were simply not the same as 50 homers in 1949. The dilemma is real but I think it's time baseball writers drop the ethical hand-wringing.

Major League Baseball, its fans, players, owners, sponsors, journalists and Commissioner Bud Selig ignored the PED fueled decade-long offensive outburst. Steroids were “banned” according to MLB, but there was no testing and no defined penalties for abuse. It was illegal but that's a law enforcement issue, not a baseball issue.

I remember going to an Orioles/A's game in the late 1980s at old Memorial Stadium with my dad. We went early just to see the Bash Brothers of McGwire and Jose Canseco take batting practice. We talked openly about how they were clearly juicing because people just don't get that big naturally. Their Popeye-like physiques were comical. I was 12 at the time and knew two things for sure 1) those guys were on something, and 2) they were stupid for doing it. Of course, they continued for the better part of a decade because it made them a lot of money and no one ever told them to stop; not Selig, not manager Tony LaRussa, not the team trainers or doctors, not the fans who paid to see those behemoths launch balls out of sight, and certainly not the sportswriters who either gave tacit approval or had their collective heads in the sand.

MLB now has a defined drug policy dealing with PEDs and steroids. Palmeiro was one of the first suspended when he tested positive in 2005 and missed 10 games. The suspension occurred just weeks after recording his 3000th hit and a few months after his steadfast denial of steroid use in front of Congress. Palmeiro is certainly guilty of poor judgment, and maybe even perjury, but after serving the suspension he owed baseball nothing more. Steroid use doesn't carry with it a lifetime ban. The policy has been revamped and a first-time offender receives a 50-game suspension. Manny Ramirez was suspended for 50 games in 2009. Does that mean he's not a Hall of Famer either?

I think players should be judged against their peers. Juan Gonzalez had some prodigious offensive numbers but his totals just don't add up and his career crashed and burned in his early 30s. He doesn't have the counting stats or the longevity, regardless of any steroid implications. Palmeiro is one of only four players in history with 500 homers and 3000 hits. He's also one of only five players in history to hit 200 home runs for two different teams. He was a Gold Glover, an All Star, made numerous playoff appearances and had a real bad month in 2005. I'm willing for forgive and forget.

The Baseball Hall of Fame is a wonderful shrine to the game's history, but it should tell all of the history; good and bad. Did the players who used steroids cheat? Sure, I guess. But so did Bud Selig, Peter Angelos, George Steinbrenner and every other owner, reporter and sponsor who willingly benefited from their actions. If Barry Bonds, Roger Clemens, Palmeiro and the like don't belong in the Hall of Fame then neither do Bud Selig, or any owner, manager, or broadcaster who operated and profited during the “Steroid Era.”