The first baseman and lefty hitter signed a one-year contract earlier this week. 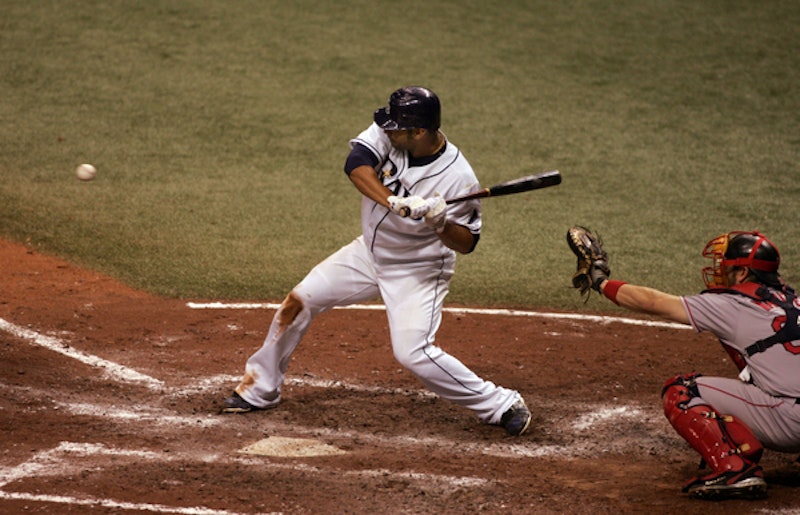 The Chicago Cubs inked Carlos Pena to a one-year $10 million deal earlier this week to fill their first base vacancy and provide some left handed pop. It's an interesting deal from Pena's perspective. He's regarded as a superb defensive first basemen and led the AL with 39 homers in 2009. On the other hand, he's coming off a horrendous 2010 season that saw him post a .196 batting average and a drastic dip in slugging percentage. Pena and his agent, Scott Boras, were no doubt shooting for a massive multi-year contract this off-season but Pena's recent decline made such offers unlikely. A one-year deal gives Pena the chance to rebound and hit the free agent market again next offseason in search of that elusive multi-year contract.

I like the deal from the Cubs’ perspective for a number of reasons:

GM Jim Hendry has wasted countless millions trying to add a left handed power hitter to the lineup over the past few off-seasons. He signed outfielder Kosuke Fukudome to a regrettable four-year deal and outfielder/known MadMan Milton Bradley to a disastrous three year contract that looked to be a clusterfuck before the ink dried. Pena's contract is for just one season and he'll be motivated to post big numbers in the hopes of cashing in next winter a la Adrian Beltre.

The Cubs fans and pitching staff were spoiled over the years by the excellent defense of Derrek Lee. After Lee's trade last August the team made due with converted outfielder Xavier Nady at first base. By many measures Pena is an excellent defender at first base. His abilities around the bag will make life easier for Cubs pitchers and young shortstop Starlin Castro.

Signing Pena short-term will allow the Cubs to enter the bidding for superstar first baseman Prince Fielder next winter. Fielder will be a free agent, and as a Boras client, highly unlikely to re-sign with Milwaukee before at least entertaining offers in the marketplace. With Mark Teixeira locked up for the next six years in New York and the Red Sox likely to ink the recently acquired Adrian Gonzalez to a massive extension this spring, the Cubs may be the biggest dog in the fight for Fielder.

Another thing to keep in mind is the currently unresolved status of Albert Pujols. The Cardinals first baseman, and best player in baseball, is a free agent after the 2011 season. It’s long been assumed Pujols would be a Cardinal for life, but there is still no agreement on a long term deal in place. Pujols could be the first $30 million per year player in baseball history, a princely sum that may be too rich for St. Louis. There would be nothing sweeter for the Cubs and the Wrigleyville faithful than to sign away the best player in the history of their chief rivals franchise. I don't think it will happen, but it would certainly shake up the baseball world and be a crushing blow to St. Louis. My guess is Pena puts up a pretty good rebound season, the Cubs sign Prince Fielder for about $170 million this time next December and the Cardinals and Pujols agree on a mega-deal that keeps Big Al right where he belongs.