Fisher Is No Coaching Titan

Can the Tennessee Titans pull it together? 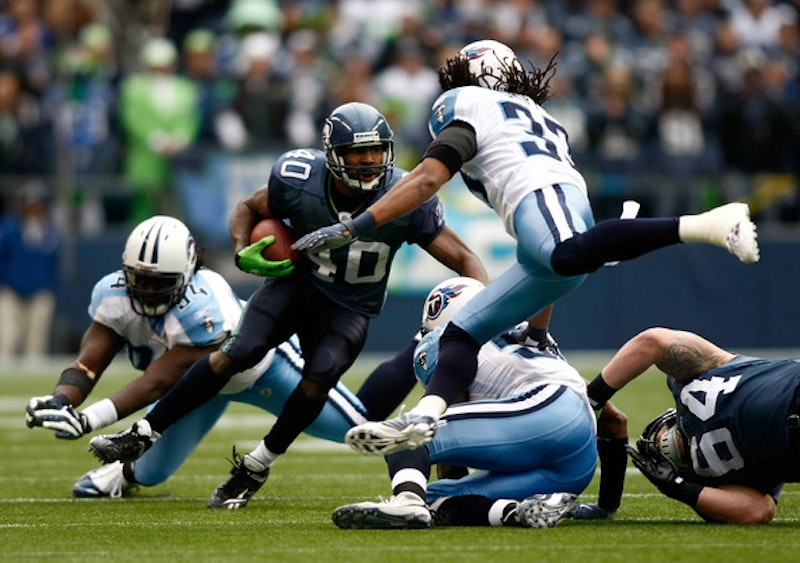 The Tennessee Titans are in the midst of an epic collapse. After starting the season 5-2 and giving the illusion of being a serious contender for the AFC title they've lost six games and looked dismal in the process. The only thing overshadowing the meltdown in Nashville is the predictable swirling of the New York Jets season down the toilet.

In addition to the six straight losses, the Titans had their presumed Franchise QB go batshit crazy (again) and AWOL after an injury. The team picked up disinterested WR Randy Moss only to see the former All Pro catch five passes for 62 yards in five games. Through it all long time Head Coach Jeff Fisher seems to fly above the fray.

Fisher is the dean of NFL coaches. He doesn't have the “Genius” label like Bill Belichick, but he's been around forever. He took over as head coach in 1994 when the franchise still called the Astrodome home. He's compiled a record of 141-114 and is generally regarded as one of the NFL's best coaches. In fact, after the most recent blow-up with Vince Young countless talking heads went on record to say that if Fisher loses a power struggle with Young and is fired by Tennessee he'd have a new job in 10 minutes. That may be so. As long as the Cardinals and Raiders are in the league anyone could end up as a head coach.

Frankly, I don't get all the Fisher love. He's been to one Super Bowl in his career, a loss to the Rams in the Greatest Show on Turf in 1999. Fisher followed that season up with a home playoff loss to the 2000 Ravens. In fact, his Titans haven't so much as won a playoff game since the 1999 AFC Championship. The Titans have only made the playoffs twice in the past six years and they’ll miss out this season as well.

I'm not saying that Fisher is a bad coach; he’s just not a great one. Great coaches win, and win big. Beating the Jaguars and Texans in October is nice but legacies are made with victories in December and January. Given the struggles to begin the 2009 season and the mess that's the 2010 season it seems like a change is due in Tennessee. On the same note, the team should dump enigmatic QB Young as well. It's clear that selecting him with the #3 pick of the 2006 draft was a mistake and the quicker the team admits it and moves on the better off they'll be. First time head coaches like John Harbaugh, Mike Smith and Mike Tomlin have experienced incredible success in recent years. Tennessee would be wise to go searching for the next Jeff Fisher, or better yet the next Bill Belichick. And yes, Fisher may have a new job in 10 minutes. I'll wish him and (insert name of perennial also-ran here) the best of luck.