They’ll still be the most hated (and loved) MLB franchise. 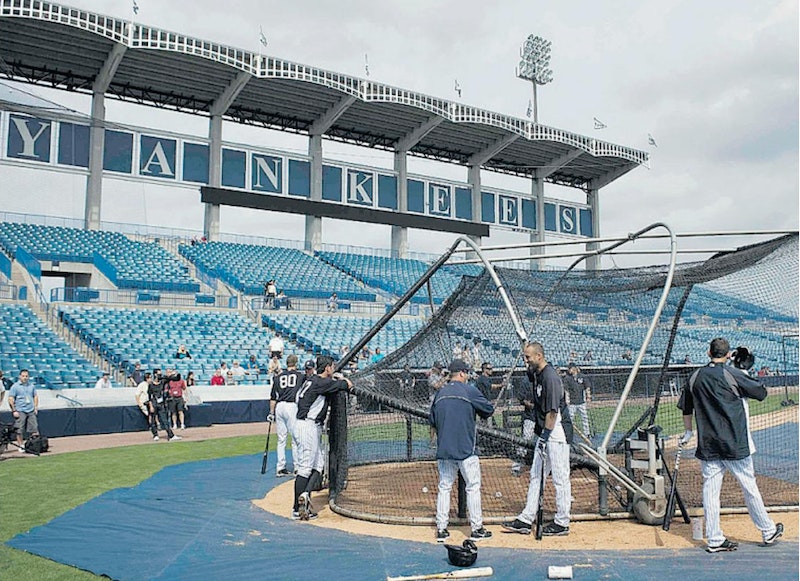 The New York Yankees plan to knock their payroll down past $189 million by 2014? Good for them, right? They’re on their way to becoming a more efficiently run ballclub. Think of the Yankees as a fat kid. Not the chubby one that everybody laughs at—that’s the Mets—but the bully who could stand to lose a few (in this analogy, payroll=girth and wins-last-season=toughness). Now that the Yanks are slimming down, GM Brian Cashman needs to make sure he doesn’t drop muscle (muscle=star players) along with the fat. That’ll be hard, though, with Curtis Granderson and Robinson Cano hitting free agency in two years.

Tampa Bay is the Chuck Norris of baseball, both lean and fierce: there’s absolutely no way the Yankees will resemble the Rays at any point in the near future. But with the luxury tax (heart disease) looming, Cashman needs to act quickly. After this season, Mariano Rivera, Nick Swisher, Pedro Feliciano, Hiroki Kuroda, Freddy Garcia, Andruw Jones, and Russell Martin are coming off the books. In addition to that, Alex Rodriguez’s grotesquely large annual salaries start to drop this year. After all that, the Yanks will still have to abstain from the fruitful free agent market of 2012. Cole Hamels, Matt Cain, and Zack Greinke are all untouchable if Cashman wants to meet his weight loss goal.

If Cano and Granderson post similar numbers the next two seasons, both players will command $100+ million. The only way to avoid the hefty price tag is to do something that doesn’t register in Cashman’s brain: extend them. The two up-the-middle guys would come at a hugely discounted rate right now. If offered today, I bet both players would agree to contracts with an AAV of less than $20 million.

This winter’s trade for Michael Pineda will help keep costs down, too. The righty has two more pre-arbitration seasons left, and the general consensus is that the hurler will eventually develop into an All-Star number two. Manny Banuelos and Dellin Betances could also join the rotation rather quickly. In 2013, CC Sabathia could be the only Yankee starter making more than a million dollars.

But is this all realistic? No, probably not. The Red Sox are attempting the same thing, and it’s just not going to work out long-term. Both teams have committed a ton of money to aging stars whose skills are going to regress faster than their paychecks. Unless their respective farm systems crank out a bunch of quality major leaguers in the next few years (which is possible, both teams have interesting minor league roots) then dipping into the free agent pool is the only way to remain relevant.

Even if they do trim a couple pounds, the Yankees will still have the highest payroll in baseball and people will still hate them for it.