What Happened to Kemba Walker? 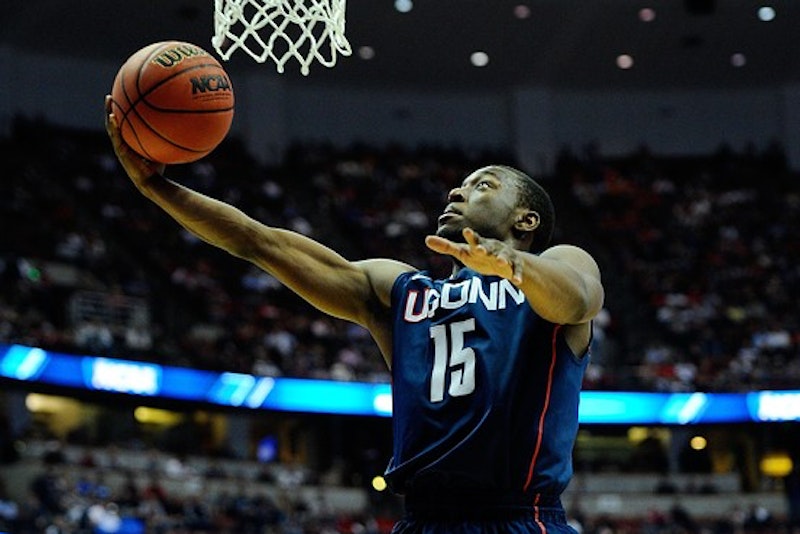 At this time last year Kemba Walker was on top of the sports world. He’d just led the Connecticut Huskies to an improbable run through the Big East tournament and was about make a mad dash to the National Championship. The Huskies ended up downing Butler in the title game last April with Walker starring as the hero. Walker’s fantastic voyage culminated at the NBA draft when the Charlotte Bobcats selected him with the ninth pick in the first round.

Walker found fortune in the NBA draft but his fame has waned. Once a college basketball star and the face of March Madness, Walker is now an NBA afterthought. The young point guard is having a fine rookie season, averaging 12.6 points and 3.9 assists in 40 games played. While he may not be posting All-Star numbers Walker looks like a perfectly capable NBA player. Too bad he’s on a putrid team.

Charlotte is a remote outpost in the NBA universe. The Bobcats are terrible. They have by far the league’s worst record at 6-34 (as of 3/14), a full three games worse than the unwatchable Washington Wizards. But the Bobcats aren’t just terrible; they’re irrelevant. Walker might as well be playing semi-pro dodge ball in Kazakhstan.

The Bobcats entered the NBA in 2004. In seven full seasons they have finished above  .500 and made the playoffs just once. I think it’s safe to say they won’t be making the playoffs this season either. The current version of the Bobcats is last in the NBA in points per game (86.8) and points against per game (100.0).

The Bobcats are the current pet project of G.O.A.T. Michael Jordan. MJ tarnished his Hall of Fame playing career with his ill-fated and ill-advised comeback with the Wizards. Now he’s calling all the shots for the worst franchise in the league. Jordan has been criticized for spending too much time on the golf course and not enough time improving the Bobcats. The Bobcats are a hot mess and not even Kemba Walker can save them.

Bobcats fans, assuming there are any, will have to put their hopes in the NBA’s draft lottery and Jordan. Kentucky’s Anthony Davis is the presumed top pick in the draft. He would make an immediate impact on defense but a lot has to happen for him to land in Charlotte. Namely, he would need to declare for the draft and the Bobcats would need to win the lottery.

The NCAA basketball tournament is underway. Over the next few weeks, 68 teams will battle it out for the title of National Champions. Can Kentucky's Anthony Davis deliver a title for his teflon coach? Will Harrison Barnes catch fire and put the Heels on his back for a run to the Final Four? Hundreds of college players will take the court hoping to be the next Kemba Walker. Someone will emerge from the crowd to cut down the nets and raise the trophy: let's just hope he never has to play for the Bobcats.