The Phillies Are No Lock This Year

There’s not enough room in the NL East. 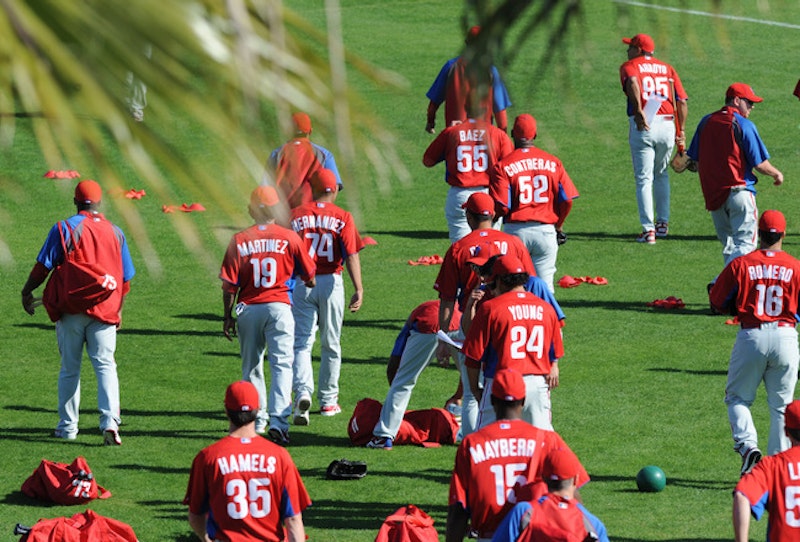 The NL East is getting crowded, and the Phillies should be scared. Was dealing away Jonathan Singleton and Jarrod Cosart for Hunter Pence, an above average but in no way super-star level right fielder, smart? In the long run probably not, but then again, the Phillies never think about the long run. Calling Philadelphia an aging team has been trendy since 2009, but is getting old isn’t always bad. Barring injury, Roy Halladay, Cliff Lee, and Cole Hamels (once he inevitably re-signs) will anchor the rotation for years. The key phrase though is “barring injury.” Chase Utley has a lot to say about that, as he was a potential Hall of Fame candidate before he succumbed to injuries. If their pitching can stay healthy, the Phils’ offense will back the team up. Ryan Howard isn’t as bad as his 1.6 2011 fWAR suggests. Once a high BABiP comes his way, the slugger will mash. GM Ruben Amaro Jr. has proven to be an innovative engineer, too. Much like the Yankees, Philadelphia will bypass the effects of aging as nimbly as possible.

The Nationals are obviously worth watching out for, though. With that skilled core of young talent, every NL team needs to be concerned. To Peter Angelos and Dan Duquette (really Andy MacPhail, since Duquette just started the job): this is how to bring a team into relevancy. Through smart drafting, luck, and audaciousness, the Nats are ready to compete. 2012 might not lead to their first playoff berth, but it will definitely end with a winning record. Once the center field situation gets sorted out and Bryce Harper receives the call, Washington will own the strongest offense in the National League, and maybe all of baseball. Jayson Werth and Adam LaRoche will rebound while Wilson Ramos and Danny Espinosa will continue to develop. If Chien-Ming Wang can stay off the DL, The Nats’ pitching is fierce, too. And hey, they’ve still got John Lannan to back him up.

But right now, best offense in the NL goes to the fresh Miami Marlins. A 1-8 of Jose Reyes, Omar Infante, Hanley Ramirez, Mike Stanton, Logan Morrison, Gaby Sanchez, Emilio Bonafacio, and John Buck is unbeatable. Miami’s revamped pitching staff is nothing to scoff at either. Mark Buehrle will either be another Derek Lowe or improve due to a favorable league switch.

What’s most amazing is that currently, the Braves are still the second best team, if only by a hair. Jason Heyward’s horrible 2011 is behind him; all signs in Spring Training point to a potent 2012. If Tommy Hanson can remain healthy, he’ll be competing for the Cy Young. And don’t forget about all their other young talent. Freddie Freeman is the butt of many jokes across Sabermetrics circles, but he’s added a hefty amount of weight, in the form of muscle, this offseason. The first baseman likely eyes a 30-home run season. And who can forget Craig Kimbrel? If Atlanta were smart, they’d convert him into a starter. He could be the next Mariano Rivera, but nothing’s more valuable than a true ace.

And then there’s the Mets. With one lawsuit complete, the Wilpons are one step closer to having the whole Madoff scandal behind them. Maybe by 2015 their payroll will be back to the old astronomical standards.